The situation is catastrophic for residents. They have experienced health problems, due to the floods mixing with sewage. 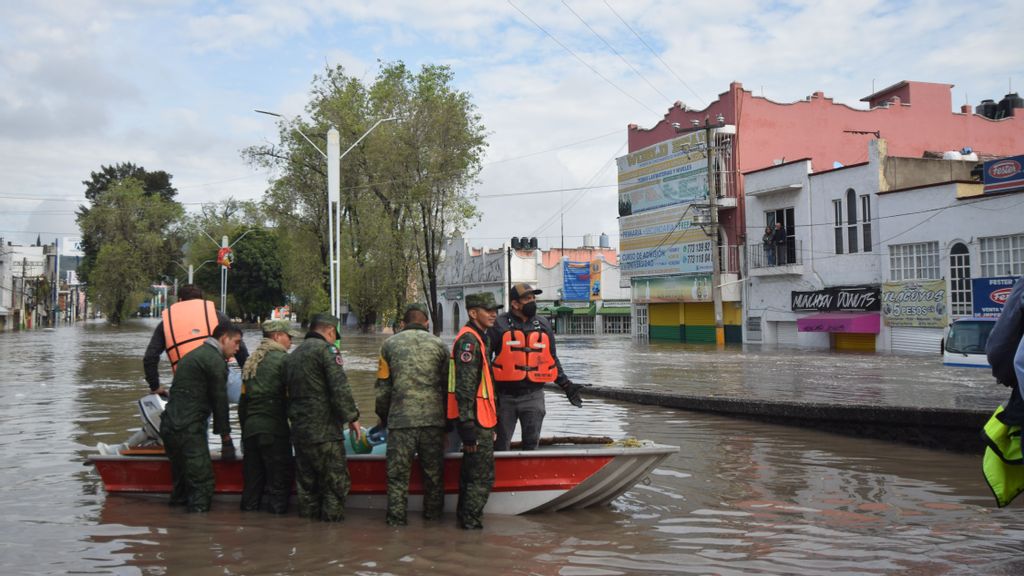 The situation in the Tula de Allende region, in the Mexican state of Hidalgo, is dire.

A series of floods on Sept. 7, resulting from the overflow of the Tula River after a series of rains, and from drainage management in the Valley of Mexico, have wreaked havoc in the region.

To date, 17 people have died, there have been more than 70,000 flood victims, 31,000 households are affected in nine municipalities, and 1,300 businesses are in ruins.

In order to access the resources of the emergency program for natural hazards, the National Coordinator of Civil Protection, Laura Velázquez Alzúa, published a Declaration of Emergency in the Official Daily of the Federation on Sept. 21.

In the early morning of Sept. 7, heavy rains and the flooding of the sewage-laden river caused the water levels in Tula to reach 10 feet in some areas. Houses, businesses and the Tula de Allende Social Security Hospital (IMSS) became submerged. Several patients in the medical center died, after the collapse of the electrical network and the loss of assisted breathing units.

“No one was able to get anything out. The water took us by surprise. People went up to the roofs of their homes and stayed there from midnight and 1 in the morning, when the flood began. We were able to deliver food and drinking water to the families via ladders and ropes. After the water level dropped by about three feet, we began to rescue them with Army boats and everything else we had at hand,” Eduardo Barrera, a Red Cross rescuer in Tula, told Zenger.

Jovanny Villaseñor rented a house in downtown Tula, where he lived with his partner and their 3-year-old son. He lost his truck and various material possessions, due to the flood. Although he has kept his job as a salesman at a tire store, his income has fallen 50 percent, due to the economic crisis in the region.

Villaseñor says it will take him a long time to recover and, like many other inhabitants, claims government authorities did not notify or evacuate them in the face of the looming disaster.

“I think not only of me and mine, but of all families in the region. The municipal president did not order the evacuation. I have friends in Tepeji del Río, where people started to evacuate from 5 in the afternoon [on Sept. 6.] If they had told us, at least from 9 p.m., I would have loaded my truck with all the important papers, some clothes for a few days, and I would have taken my family up the hill,” he told Zenger.

The situation is catastrophic for the inhabitants, who have already experienced health problems due to the floods mixing with sewage.

Although several brigades have been organized to clean and disinfect the area, the current condition of the river has set off alarms. Ten days after the first flood, the river has overflowed three times, and more flooding is expected.

“Like some neighbors, many of us suffer from skin problems as a result of the contact with sewage,” Héctor Estrada, one of Tula’s victims, told Zenger. “We are constantly on alert. That’s the fear shared by families that live in one-story or small houses. Right now, things may appear to be calm there but, at 9 or 11 at night, the government may warn us that we are at risk again, and we must vacate our homes. We don’t believe we’ll be able to go back to normal any time soon,” he said.

Faced with a constant state of emergency, the governor of the state of Hidalgo, Omar Fayad, has tried to create a plan to mitigate pollution in the region. He attributes the situation to the massive rains in the area and the wastewater from the Valley of Mexico that flows into the state.

“Central Mexico nourishes itself with water from Hidalgo and, in return, Hidalgo receives and treats its wastewater, and I want to continue doing so … I ask that all government sectors join together to rectify the ecological damage produced in the Tula region for decades,” he said. He asked for donations on Twitter for the people affected.

For several years, the Tula River has been affected by wastewater pollution. In 1974, the river flow, which carried clean water, was connected to the Central Emitting Tunnel (TEC), to transport drainage from Mexico City and the State of Mexico. In 2019, the river was also connected to the East Emitting Tunnel (TEO), which doubled the drainage capacity.

In 2017, the National Water Commission (Conagua) wanted to start a project to expand, line and rehabilitate the Tula River system. However, the ecological impact caused at the start of the project, when more than 1,000 trees were cut down, led residents of the neighboring communities to stop the work.

René Romo Rivera, an environmentalist from the Collective of Communities in Defense of Life and Territory of the Toltec Region, said he had approached authorities to seek alternatives. They include sending sewage surplus to the Mezquital Valley, in the same state, and prevent the Tula riverbed from becoming a large canal to transfer the wastewater from the Valley of Mexico region.

“The proposal was presented with the support of people with experience in civil works from the construction workers union. Since the project was stopped, we have worked with people in the National Water Commission of the municipality and the state of Hidalgo. We are seeking support from the local and federal deputies,” said Romo Rivera.

Wastewater management became more complicated with the arrival of the rains, which covered the Valley of Mexico region, after several months of severe droughts, said Víctor Borguett, General Director of the Cuenca Aguas del Valle de México agency (OCAVM.) The situation at the Requena dam, which borders the municipalities of Tula and Allende, has been critical.

“The Conagua can handle water up to a certain extent, but we do not have the infrastructure to be able to stop it when it overflows, like what happened in Hidalgo, where the Requena dam could not handle the water excess, and it flooded,” he said.

“In November 2019, we told the current governor that Tula does not have to be the sewer for the State of Mexico when it comes to receiving large amounts of wastewater … We have not yet received an official response from the authorities,” Romo Rivera told Zenger.

«Previous Post
Venezuela’s Opposition Is Back On The November Ballot»Next Post
Blood Sisters: Vampire Bats Enjoy Getting A Bite To Eat With Friends