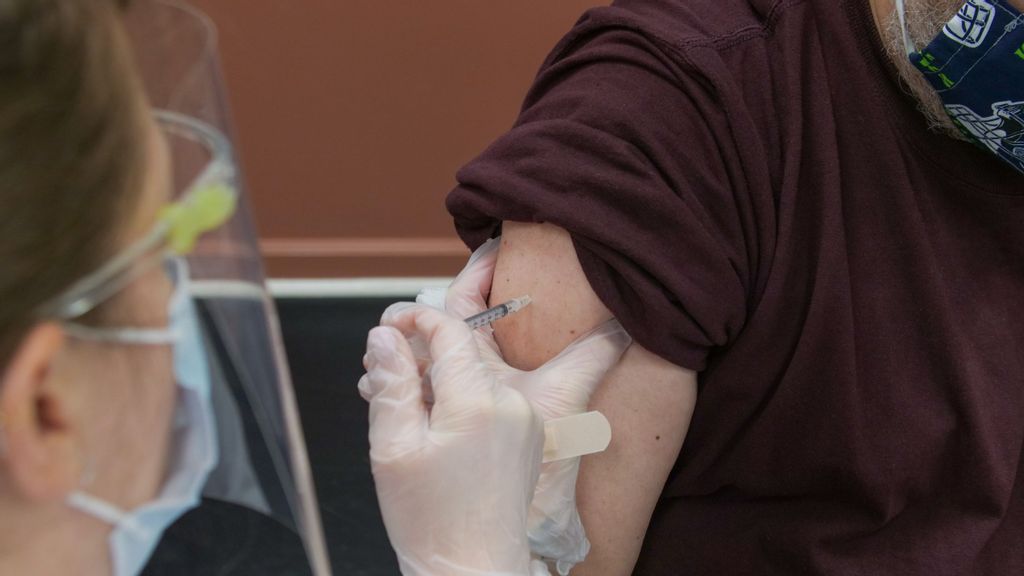 Findings from the study suggest that the third dose boosts immunity about tenfold compared to those who had received only two doses of the vaccine at least five months earlier. (Steven Cornfield/Unsplash)

Israeli researchers have determined that a third (“booster”) dose of the Pfizer-BioNTech vaccine is effective at preventing both infection and severe illness.

The findings from the first such study were published  Sept. 15 in The New England Journal of Medicine.

Findings suggest that the third dose boosts immunity about tenfold compared to those who had received only two doses of the vaccine at least five months earlier.

The study was done by an interdisciplinary group of experts from the Weizmann Institute of Science, Ministry of Health, Technion–Israel Institute of Technology, Hebrew University of Jerusalem, Gertner Institute at Sheba Medical Center and the KI Research Institute.

Israel offers a unique perspective, as it was the first country in the world to vaccinate a significant portion of its population,  and the first to endorse a formal booster vaccination policy.

By the end of March 2021, more than half of Israel’s population was vaccinated with two doses of the Pfizer-BioNTech vaccine — many weeks before most countries.

Nevertheless, Israel has been facing a widespread infection resurgence.

By the end of August, infection rates reached over 10,000 confirmed daily cases and more than 600 people were hospitalized with severe illness.

Experts believe the spike happened for two reasons: the rise of the so-called Delta variant — a more transmissible variant of SARS-CoV-2 — and the waning of the Pfizer vaccine’s effectiveness over time.

In response, Israeli authorities approved the administration of a booster dose in mid-July, first to high-risk populations, and by the end of July to anyone age 60 and older. Soon after, the booster campaign was expanded to include all vaccinated Israelis who had received their second dose at least five months earlier.

As of now, nearly three million citizens have received a booster dose.

Study of a million Israelis

The researchers examined data on more than a million Israeli adults, half who had not received the third shot and half who did.

Twelve days or more after the booster dose was administered, the rate of confirmed infections and of severe illness cases was more than 10 times lower in the booster cohort compared to the non-booster cohort.

An additional analysis, aimed at neutralizing possible behavioral differences between the two cohorts, revealed that the booster cohort had about a five-fold lower rate of confirmed infections.

Overall, 4,439 new confirmed cases of Covid-19 and 294 cases of severe illness were reported in the non-booster cohort, compared to 934 new cases and 29 severely ill individuals in the booster cohort.

Other studies have shown that individuals vaccinated six months earlier with two doses have approximately half the risk of contracting the Delta variant compared to unvaccinated individuals. According to the Israeli study, the booster dose reduces the susceptibility to confirmed infection to approximately 5 percent.

Furthermore, Health Ministry statistics show no serious cases in people 60 and over who got infected after having the booster shot.

In the United States, advisers to the Food and Drug Administration voted unanimously on Friday to recommend that the agency authorize a booster shot of the Pfizer-BioNTech coronavirus vaccine six months after vaccination only for people 65 years and older and for anyone at risk for severe illness, not to the broad public.

Epidemiologist Dr. Ran Balicer, founding director of Clalit Research Institute, said in a tweet that the United States felt a lower sense of urgency because its population was vaccinated later than Israel’s; it is waiting on proper studies (likely from Israel) on safety and efficacy of the third dose; and it prefers to act gradually, in contrast to Israel.

Another Israeli study, published in The New England Journal of Medicine on Sept. 16, reveals that the Pfizer vaccine was not associated with an elevated risk of adverse events such as Bell’s palsy, appendicitis and herpes zoster infection, among others, yet it was associated with an excess risk of myocarditis (1 to 5 events per 100,000 people).

However, the researchers found that the risk of myocarditis and of many other serious adverse events was substantially increased after SARS-CoV-2 infection — suggesting it’s safer to get the vaccine than the disease.

Meanwhile, a study by Belong.Life, an Israeli developer of social and professional networks for managing and navigating various diseases and patient journeys, shows that the relative risk of non-vaccinated cancer patients being infected with Covid-19 is 21.5 times higher than that of those who are vaccinated.

Among more than 1,000 “Belong – Beating Cancer Together” users receiving the Covid-19 vaccine, 97 percent did not experience major side effects from the shot. Of the 49 percent who received the vaccine during active cancer treatment, 96 percent did not have to delay, interrupt or cease therapy to get their vaccine.

The research, which is the first large report on real-world data obtained voluntarily from cancer patients, is being presented at the ESMO Virtual Congress 2021.

“We were very pleased to see the high level of vaccination among study participants, which seems to provide a ‘firewall’ against Covid-19 viral pandemic,” said Dr. Eli Sapir, co-author of the study and director of radiation oncology at Assuta Ashdod Hospital.