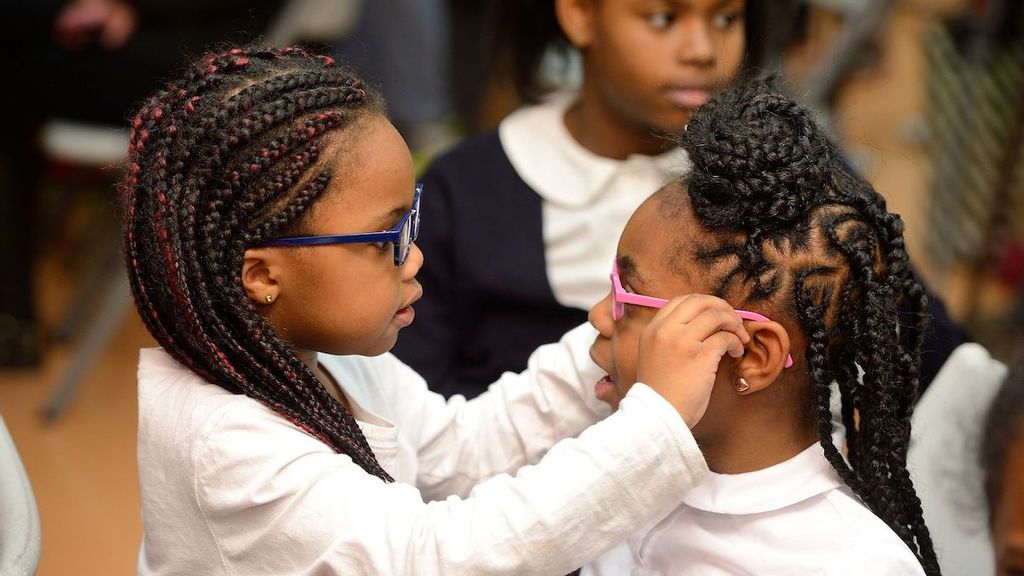 Among those who showed the greatest improvement were girls, special-education students and kids with the lowest scores.

The study, published in JAMA Ophthalmology, followed 2,304 children from 2016-2019 who received eyeglasses after a routine vision screening provided by the Baltimore City Health Department.

Children in grades three through seven had a boost in their reading and math scores in the first year after receiving glasses — improvement equal to two to four months of extra time in school. Special-education students and pupils in the bottom quartile improved by the equivalent of four to six months of extra instruction, according to the study.

The children received the glasses through the nonprofit Vision for Baltimore, which estimates that as many as 15,000 of the 60,000 students in Baltimore City Public Schools lack eyeglasses.

“Vision for Baltimore means more than just corrected vision for students in city schools,” said Sonja Brookins Santelises, the city public schools’ CEO. “It’s a gift that supports their ability to see and interact clearly with their lessons, as well as a boost to self-esteem. We are thankful for this program because it removes a barrier to success for our students, especially those struggling with access to medical care.”

Megan Collins, a co-author of the study, said that for many children, providing eyeglasses can change the trajectory of their school years.

“We have a young population that largely just needs glasses, but for lots of barriers, they haven’t gotten them,” said Collins, an assistant professor of ophthalmology at the Wilmer Eye Institute. “So we’ve been able to help with connecting them to the healthcare. But we’ve gone beyond that — and this is what’s really sort of novel about our work — is looking at how that’s impacting them in school.”

“Some of these kids, they don’t know that they have eye problems. Or even if they do, they’ve already found ways to compensate,” said lead author Amanda J. Neitzel, deputy director of evidence research at the Johns Hopkins Center for Research and Reform in Education. “And then other students haven’t — they’ve compensated, but they just haven’t been as successful at it. Maybe part of why they’re not doing well at school is they’re just struggling to see.”

Maryland requires vision screening for children upon entering their first year of school, first grade and eighth grade. Vision for Baltimore goes beyond that, covering all children in the city’s public schools from kindergarten through eighth grade, serving about 45 schools.

Established in 2016, the Vision for Baltimore partnership includes the city’s public school system and its health department, and Johns Hopkins University’s schools of education and medicine. Nonprofit Vision to Learn conducts eye exams at the schools, and manufacturer Warby Parker provides the eyeglasses. Warby Parker also provides repairs or replacements up to one year.

Vision for Baltimore, which gets philanthropic support, said it has screened 64,000 students in 137 city schools and distributed 7,900 pairs of eyeglasses.

If the vision screening indicates further examination is warranted, parents or guardians are given the options of free eye exams for their children. When the study was being conducted, they also were invited to enroll their children. The exams and eyeglasses are free, although Medicaid may receive a bill if the student’s family is in that program.

“That’s why these screenings become so valuable,” Collins said. “That’s the first indication a child might have a problem.”

However, the study also found the gains didn’t continue into a second year. Collins and Neitzel said there are various reasons, including the kids changing schools or districts, as well as needing regular encouragement from teachers and parents to keep wearing glasses.