The leaders of Australia, India and Japan are in Washington to seek cooperation in the face of China’s growing power. 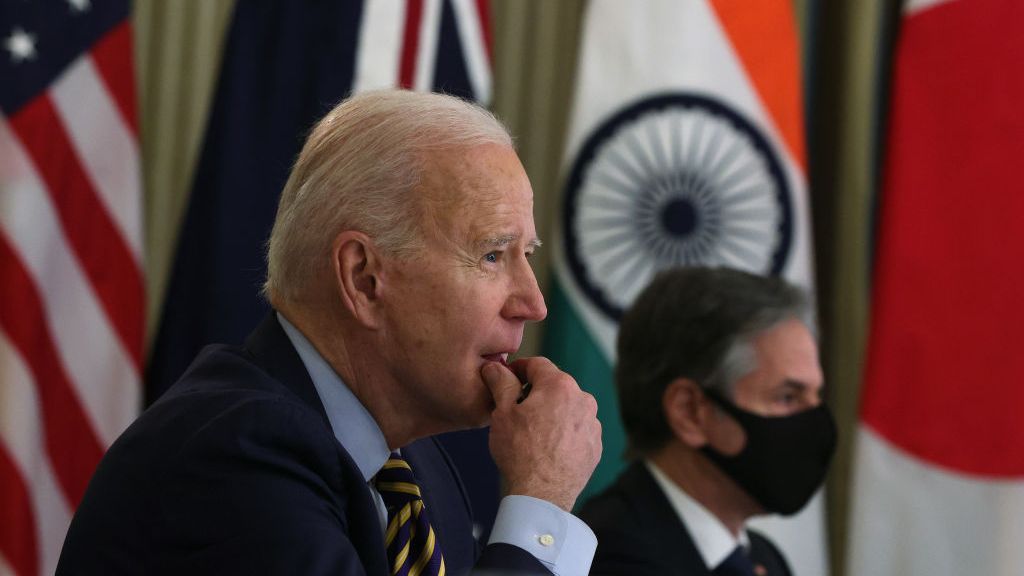 Climate change, infrastructure investment — to counter China’s massive “Belt and Road” initiative — and global vaccine diplomacy will be the focus of talks when U.S. President Joseph R. Biden Jr. hosts the prime ministers of Australia, India and Japan in Washington on Friday.

Australia’s Scott Morrison, India’s Narendra Modi, Japan’s Yoshihide Suga and Biden will aim during the first top-level in-person summit of the “Quad” since it was rejuvenated in 2017 to show the world that the group can be a cohesive, influential bloc, analysts say.

Whether the United States is willing to allow its partners equal roles instead of assuming primacy will be a pressing concern, said Alexander Neill, the former head of the Asia Security Program at London’s Royal United Services Institute for Defense and Security Studies.

“Like any other international forum with U.S. involvement, the United States sometimes doesn’t display strategic empathy,” Neill told Zenger. “But in the case of the Quad, it’s absolutely about that, and I think it will be a level playing field.”

The first top-level dialogue of the Quad, which was founded in 2007, did not take place until this past March when its leaders met for a virtual summit and pledged to work closely on distributing COVID-19 vaccines. Addressing climate change and ensuring a “free and open” Indo-Pacific in the face of the threat they say is posed by Beijing’s territorial ambitions would also be made priorities, the group said.

The Quad includes four of the world’s biggest democracies, largest economies and most experienced naval powers. While it was first conceived as a loose platform for engagement on defense and security matters, the Quad transformed into a geopolitical alliance when China’s rise began to present more threats to Australian, Indian and Japanese interests.

“The Quad has evolved over the years, and though it might lack a secretariat and other physical trappings, its importance has only grown as a collective mechanism to tackle growing Chinese belligerence in the Indo-Pacific,” Harinder Sekhon, a foreign policy analyst and senior fellow at the Delhi-based Observer Research Foundation, told Zenger.

For the United States, the alliance is a foreign policy linchpin.

Friday’s Quad meeting comes as Biden’s image around the world has taken a battering over the withdrawal of U.S. forces from Afghanistan after 20 years. But the priority given the high-level gathering might be seen as an indication that the U.S. is finally serious about its long-publicized new strategic posture — what former President Barack H. Obama called “the Pivot to Asia” — analysts say.

Escalating the importance of the Quad by hosting its leaders in Washington is part of a one-two punch following the Afghanistan withdrawal, said James Gelvin, a history professor at the University of California, Los Angeles.

“Biden’s meeting with the Quad leaders is meant to signal to the world that the United States is willing to join with its allies and use military and economic power to thwart what it perceives to be China’s expansionist policies, reflected in China’s flexing its muscles with its ‘near-abroad’ neighbors or economic expansionism,” Gelvin told Zenger.

Neill noted this dynamic means the Quad summit’s relevance would always be tied to China, even if the U.S. will try to focus joint statements instead on the four nations’ shared interests.

“The Quad is a ‘force multiplier’ on the geopolitical stage, something that fits well with the Biden administration’s objectives to enhance friendships and alliances in the Indo-Pacific,” Neill said. “If China behaves coercively and challenges the ‘rules-based system,’ the Quad gains more relevance; if China is collaborative, then the Quad is less relevant.”

But Friday’s Quad meeting is unlikely to make this explicit, Neill said.

“All four partners will likely steer away from targeting China. … But each country has a very real security concern about China. So, at a minimum, exchanging notes on China’s patterns of coercion or assertive behaviors will enhance understanding of how to counter them,” he added

For Australia, India and Japan, though, the Quad grouping presents varied benefits and risks.

For India, the treatment of issues such as regional infrastructure spending, cybersecurity threats and the global COVID-19 response — including vaccinations — will be just as important on Friday, analysts say.

While India’s External Affairs Ministry said the Quad members would discuss “their shared vision of ensuring a free, open and inclusive Indo-Pacific,” it also pointedly noted the group would “review the Quad vaccine initiative” — a since largely forgotten promise made in March for the group to share resources to fight COVID-19.

India had previously demurred on escalating the Quad grouping’s importance out of fears it would provoke Beijing, noting it was the only one of the four with a land border with China.

Australia, however, has come under increasing pressure from Beijing to bow to its demands or risk losing its main trading partner, a point alluded to by its prime minister as he left for Washington.

“This is all about ensuring that Australia’s sovereign interests will be put first to ensure that Australians here can live peacefully with the many others in our region,” Morrison said.

For Japan, the Quad serves as an extension of its post-war military alliance with the U.S. Japan’s Suga is expected to use the meeting to convey that his country’s policy on the Japanese-controlled but Chinese-claimed Senkaku Islands, as well as Hong Kong, China’s Xinjiang region and Taiwan will not change, even after he steps down  from office on Sept. 30.

“The changing power balance brought by the rise of China in the Indo-Pacific, along with the increasing inward focus spurred by the pandemic, have increased uncertainty,” Suga said before leaving for the U.S. “In response, Japan should strengthen its alliance with the U.S. to bolster deterrence and also work on increasing its own defensive capabilities.”

Whatever shared interests the four nations have, it will be hard for the leaders of the U.S., Australia, India and Japan to shake preconceived notions that the success of the meeting will be judged on what it means for U.S. foreign policy, analysts say.

“The United States is attempting,” UCLA’s Gelvin said, “to do to China what it did to the Soviet Union during the Cold War: contain Chinese power and build an alliance system committed to safeguarding American hegemony and the status quo.”