Vampire bats use their individual squeaks to chat with friends and share information on the best food, says new study. 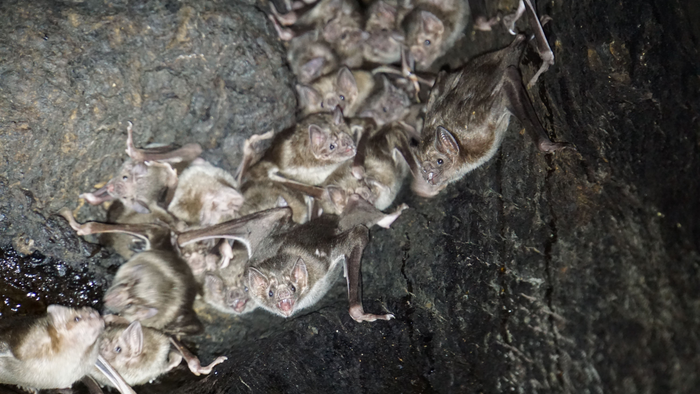 Vampire bats may not leave the roost together, but they often find the bats they are most closely bonded with while foraging for food far beyond the roost. Researchers suspect they may be sharing information on animals they can feed on. (Simon Ripperger)

Vampire bats, like humans, enjoy getting together with friends for a meal, even though their favorite snack is blood.

A study of female vampire bats (Desmodus rotundus) in Panama revealed that they prefer to gather food with bats from the same roost. Published in the journal PLOS Biology, the study indicated that the thirsty winged mammals continue to cooperate well beyond their roosting place.

When roosting in trees, vampire bats are known to groom each other and share regurgitated bloody meals with closely bonded roostmates. The researchers attempted to explore the limits of this “friendship,” noting that the “social bonds of vampire bats are not restricted to grooming and food sharing at the roost, but bonded individuals even hunt together, highlighting the complexity of their social relationships.”

The scientists put proximity “backpack” sensors on 50 female vampire bats, of which 27 were wild and 23 had been captive for two years. The bats were released to a roosting place at a Panamanian cattle pasture. The team tracked the foraging behavior of both groups of bats, using the wild bats as a control group. They discovered that the lengthy captivity had not interfered with the bats’ ability to hunt.

According to the study, the bats hardly ever left the roost together, but females closely bonded with others were reunited far from the roost. For two weeks, sensor-equipped bats produced data on almost 400,000 individual meetings.

Bats that were more sociable in the roost also socialized with more partners while foraging. Audio recordings of vampire bat calls revealed three distinct types: social calls, antagonistic calls and feeding calls. The third type had never been observed before in wild or captive vampire bats.

The authors of the study believe bats socialize during foraging to share information about the animals, often cattle and horses, on which they feed, such as identifying open wounds on the host animals. This collaboration may save time and effort in seeking out wounded cattle. The bats’ social calls resemble those used to recognize roost partners and may allow them to identify flying friends and enemies.

Vampire bats “making friends” in the roost may increase interdependence among the socially bonded so that they can benefit from each other’s success at hunting and create alliances against competing bats also seeking food.

“Everything we’ve been studying with vampire bats has looked at what they’re doing inside of a roost. What nobody has really known up until now is whether these social relationships serve any function outside the roost,” said study author Gerald Carter, who teaches at Ohio State University.

“Understanding their interactions with a completely different group of bats out on the pasture can help us understand what’s going on inside the colony. If every time they leave the roost they’re getting into battles, that can increase the amount of cooperation within the colony,” he said.

Fellow author Simon Ripperger captured audio and video of the foraging vampire bats. He noticed bats clustering on one cow, while other bats were seen on other cows. Some drank from the wounds, while others fought for access. He was able to make the first recordings of a bat call associated with foraging.

“I could see them vocalize even if they were alone on a cow, and they [would] vocalize back and forth, so we can tell that they interact while they’re feeding,” said Ripperger.

The bats that socialized during the day at roosts also found each other while foraging at night more frequently than bats with no such bond. Closely related bats had meet-ups for food that lasted longer than those held by other bats. “A longer interaction is more likely to be cooperative or affiliative than a short encounter, which could be neutral or aggressive,” said Ripperger.