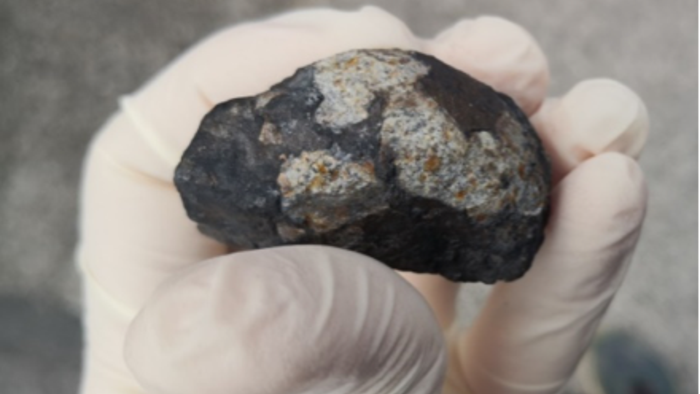 Fragment of the Novo Mesto meteorite recovered with the help of numerous videos recorded as the fireball fell to Earth. (Bojan ambrozic, Center of Excellence on Nanoscience and Nanotechnology, Slovenia)

Amateur video taken in Central and Eastern Europe is helping scientists track rocks that fell to Earth from a meteor.

Cars’ dashboard cameras, security cameras and even a cyclist’s helmet camera have been used to help locate 40 fallen space rocks in Slovenia while video recordings have also captured the fireball streaking in the skies of Austria, Croatia, Hungary and Slovenia.

Observers said they heard explosions and saw a flash in the sky before fragments from a distant asteroid were found in the fields and villages of southern Slovenia.

“The fireball’s path is in a volume of the world’s sky among the most densely observed by specialist night-operating cameras. Its path would have been caught by at least 20 if it happened just a few hours earlier. But because this fireball occurred during the day and was recorded by dashcameras moving up to 70 kilometers [43 miles] per hour, we required a different approach,” said Denis Vida, a University of Western Ontario scientist.

Named for Novo Mesto, the city in Slovenia where fragments were found, the space rock, according to astronomers, is an ordinary chondrite-type meteorite. But being linked to the region in the solar system where near-Earth objects (comets and asteroids) are in orbit around the sun, it might offer clues about large asteroids that could be hazardous to Earth, scientists say.

Scientists believe the fireball, which was observed on Feb. 28, 2020, was originally a mass weighing more than four tons (about 8,800 pounds) and measuring about one yard across. Upon entering the atmosphere, it broke up into 17 smaller pieces, according to video recordings.

The largest space rock that was observed, which is estimated to weigh about 20 pounds, has not been found. It is possible that it slammed into a muddy field and was inadvertently plowed under before it could be uncovered, the scientists say.

Scientists normally use a network of special cameras to calculate the paths taken by fireballs by comparing their positions to the stars behind them. That is how scientists know where the space rocks can be found and determine where they came from. However, these networks are designed to work at night.

Because brightness helps astronomers determine how a fireball breaks up, and the videos were recorded during the day, astronomers had to innovate by obtaining a dashcam identical to one that had recorded the fireball so they could compare brightness.

Determining the exact coordinates from the dashcam footage of moving vehicles — for every video frame and to a precision of about one centimeter — was difficult work. Amateur sleuths were enlisted to take photographs of known landmarks found in the videos, such as mountains, telephone poles and buildings to create 3D models for astronomers. These allowed scientists to triangulate the impact locations to within a few inches.

Vida is presenting the Initial results of the findings at this month’s Europlanet Science Congress (EPSC) 2021 virtual meeting.

«Previous Post
The Atlantic Forest, One Of The Richest In Global Biodiversity, Is Plagued By Wildfires »Next Post
Leo DiCaprio Invests In Israeli Cultivated Meat Pioneer