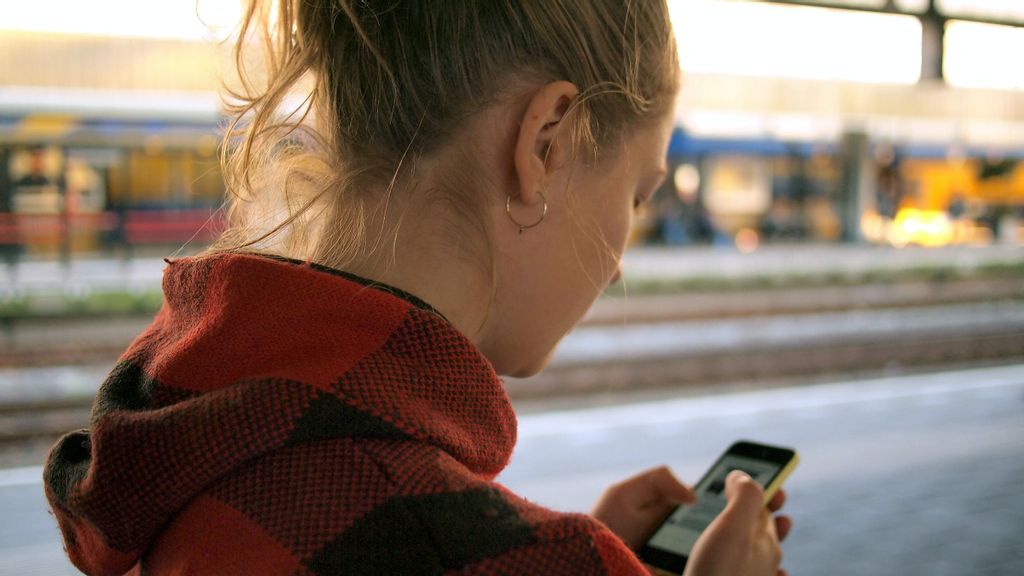 Using the Teen Talk app on a cellphone gives teens greater privacy and less risk of being overheard by a parent, versus using a traditional help hotline. (Daria Nepriakhina/Unsplash)

Sometimes it is easier to let the tech do the talking.

An innovative new app is helping teens communicate via text about the difficult issues they face.

The Teen Talk app, developed by Jewish Big Brothers Big Sisters of Los Angeles, gives teens a safe space to connect with peers. The cellphone app gives teens greater privacy and lower risk of being overheard by a parent, versus using a traditional help hotline.

When volunteer Shira Schlessinger, a 17-year-old high school senior, logs on to help her peers, she knows their concerns are diverse. She could be texting with someone who had a fight with a parent, a crippling case of COVID fatigue or even someone who is struggling with thoughts of suicide.

Schlessinger is trained to deal with these situations and many others.

When the pandemic lockdown began in March 2020, daily posts on the app quickly increased. Over the course of the pandemic, the number of unique individuals logging in for at least five minutes daily jumped from around 100 to more than 200.  The app now averages 155-170 posts per day.

“We had not prepared for that kind of spike in usage and the app crashed,” Cari Uslan, the agency’s CEO, said of the early days of the pandemic. “We got some emergency funding and support to build up the back end to meet the growing need, increase usage and create more capacity for the app to sustain itself.”

Posts related to isolation and loneliness have remained steady. Uslan said the majority deal with users experiencing depression followed by discussions of relationships, both family and romantic.

Trained teen advisers like Schlessinger are available nightly, though teens can post anytime and will receive a response when advisers come online.

Because users post anonymously, Schlessinger and her fellow teen advisers never know how literally “close to home” the users are.

The majority of the users are in the United States and Canada, according to app administrators, though the app can be downloaded and used on Android or iOS phones from all over the world. The app, which launched in 2018, is free and nonsectarian.

The teen advisers get 50 hours of specialized training and are supervised at all times by adult mental-health professionals. Teens turn to these professionals when there is a perceived risk users might hurt themselves.

During her first day as an adviser, Schlessinger said she needed to refer a user to a suicide hotline. As she reached out to her supervisor for support, Schlessinger — who describes herself as “the therapist friend” within her circle — was struck by the enormity of the situation.

“I thought this is real. This is someone’s life. This isn’t my training anymore,” Schlessinger said. “And I remember feeling very humbled that I was being trusted literally with these kids’ lives, even though I was 16 at the time and still a kid myself.”

Self-harm is another consistent topic on the app.

September is Suicide Prevention Awareness Month. The National Alliance on Mental Illness states that suicide is the second leading cause of death among people ages 10 to 34.

In the United States, 11.8 percent of young adults ages 18 to 25 have serious thoughts of suicide each year. Among high school students, the prevalence is 18.8 percent according to the alliance.

Andrea Sonnenberg, an attorney and mental health advocate in Los Angeles, said the mental health crisis is “the pandemic without a vaccine.”

Young people are at particularly high risk, which magnifies the need to boost awareness and reach those in need, she said.

“Something that is innovative like this app, we can try to reach people in new ways,” Sonnenberg said of Teen Talk. “Because it’s so important for people to be connected, for people to feel not alone, to feel that other people are going through similar struggles and to learn from other people what might be working for them.”

Sonnenberg said the Gen Z generation has less of a stigma about receiving treatment for mental health. She is developing a podcast called “Getting Thru” for young people to talk about their experiences with mental-health issues and techniques that have helped them.

Her commitment is personal.

In 2017, following the death of their 21-year-old son who had struggled with mental health issues, Sonnenberg and her husband, Glenn, established the Bradley Sonnenberg Wellness Initiative at the University of Southern California Hillel to help college students confronting similar challenges.

“Because I have experience with these challenges, people have felt comfortable talking to me,” said Sonnenberg. “That’s really one of the things I feel so strongly about: the need to talk about these issues. The more we talk about it, the more comfortable we get, and the more commonplace we realize it really is.”

Carys McKenzie, a high school senior in Los Angeles, was drawn to Teen Talk after seeing notices about it at her school. The idea of speaking anonymously to a peer was appealing. For McKenzie, advice from someone her own age was more likely to be of value.

She found the experience of using Teen Talk so useful she decided to become an adviser. Being on the other side of the chat has been rewarding, she said.

She recalled an encounter at the end of a shift, after she asked the teen she had been advising how she was feeling.

“I got the most genuine response from her saying, ‘Thank you so much. You’ve been so helpful, and I had the first non-stress-related kind of cry,’” McKenzie said.

“It was so nice to hear that and to be part of that exchange.”

The Teen Talk app is available at the Apple Store and on Google Play.