The smallest-ever flying structure can be used to monitor air pollution and disease and dissolves harmlessly after use. 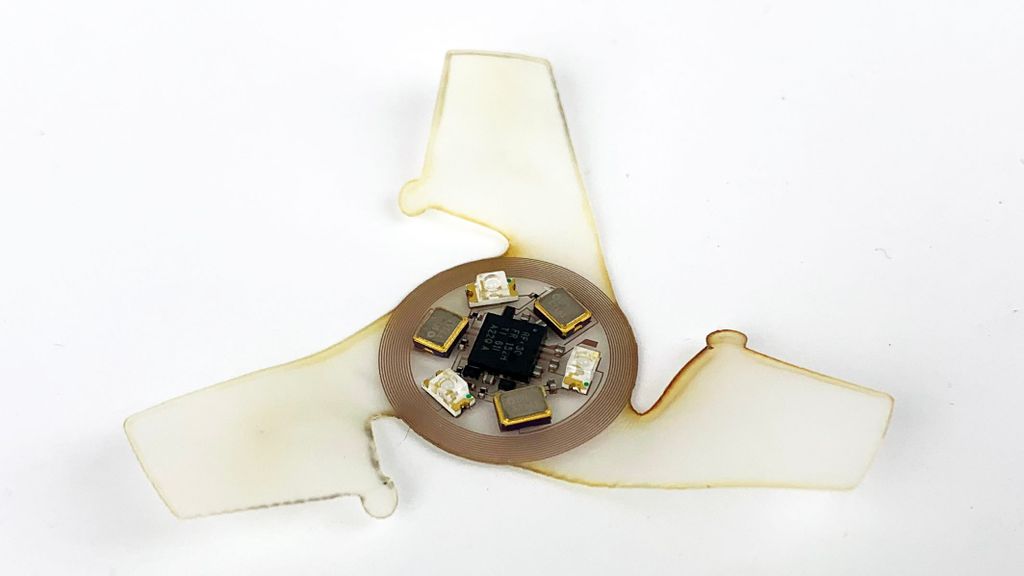 A close-up of a 3D microflier, outfitted with a coil antenna and UV sensors. (Northwestern University)

A new flying microchip, no bigger than a grain of sand, has neither a motor nor an engine but is dispersed on the wind to check on airborne disease, air pollution and other environmental contamination.

John Rogers, who led the device’s development, said the goal was to get tiny electronic devices to fly, so they could be used to monitor air pollution, track airborne diseases and assist with population surveillance from the sky.

“We were able to do that,” Rogers said, “using ideas inspired by the biological world. Over the course of billions of years, nature has designed seeds with very sophisticated aerodynamics. We borrowed those design concepts, adapted them and applied them to electronic circuit platforms.”

The microflier research is featured on the cover of the Sept. 23 issue of Nature.

“We think we beat nature,” Rogers said, referring to the microfliers’ ability to fall more safely than seeds of the same size falling from trees and plants. “We also were able to build these ‘helicopter’ flying structures at sizes much smaller than those found in nature.” This was important, he said, because of the ongoing trend of developing increasingly smaller devices for the electronics industry.

Mimicking nature, the microflier drifts with the wind like a maple tree’s winged seeds, spinning like a helicopter’s rotors to land on the ground. The engineers designed it to make a slow, controlled descent, so it can better survive a drop from a high elevation. This also means it can spend more time in the air and cover a larger area.

Trees have evolved to spread their seeds and propagate their species across wide expanses. “Evolution was likely the driving force for the sophisticated aerodynamic properties exhibited by many classes of seeds,” said Rogers. “These biological structures are designed to fall slowly and in a controlled manner, so they can interact with wind patterns for the longest possible period of time.”

The research team studied the seeds of various species of trees and plants, which they used as the basis for multiple types of microfliers, varying in shape and size. Their main inspiration, however, came from the tristellateia, a flowering vine with star-shaped seeds featuring bladed wings that produce a slow rotation in the wind.

Using advanced technology, the team modeled the air flow around the microflier and compared the results with the tristellateia seeds’ slow rotation. They then produced a device featuring three wings that utilized shapes and angles drawn from the wings of these seeds.

The researchers outfitted one of the devices to detect particulates in the air, while they added pH sensors to another to monitor water quality and photodetectors to measure sun exposure at different wavelengths. Large numbers of microfliers may one day be dropped from aircraft or buildings, dispersing broadly to monitor environmental conditions. Their power source harvests ambient energy to wirelessly transfer data to a smartphone, tablet or computer.

To produce the microfliers, Rogers’ lab used degradable materials that harmlessly dissolve in water when the devices are no longer needed, preventing them from becoming an environmental hazard.

“We recognize that recovery of large collections of microfliers might be difficult. To address this concern, these environmentally resorbable versions dissolve naturally and harmlessly,” said Rogers.