The candidate draws support from the middle class, as rival parties fear rise of populism. 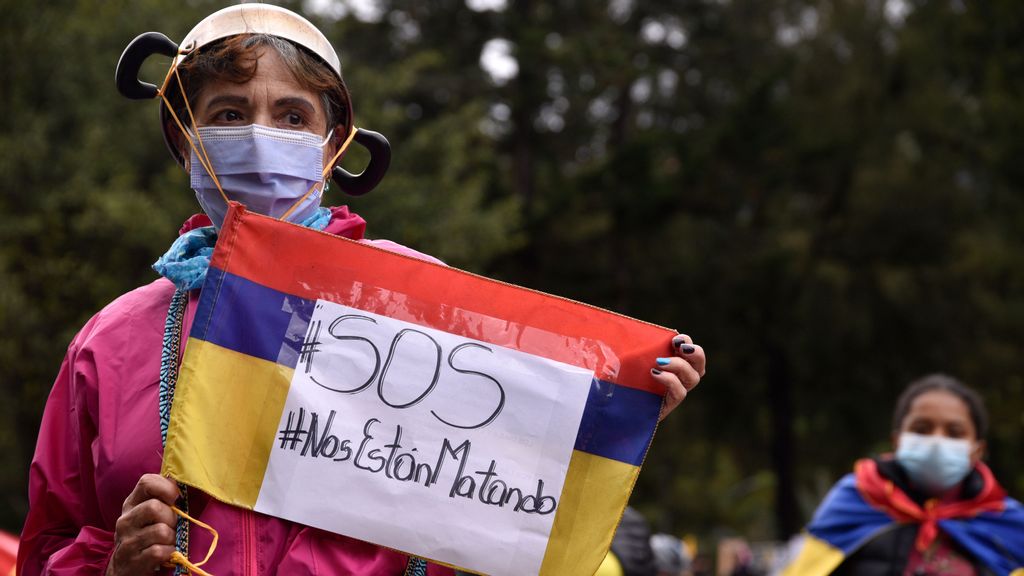 Colombians demonstrate against the government on July 29. Protests against poverty, inequality and police brutality broke out in April. With a polarized society, Colombia will hold a presidential election in May 2022. (Guillermo Legaria/Getty Images)

It’s eight months away, but Gustavo Petro Urrego leads the polls in Colombia’s hotly contested presidential election, set for May 29, 2022.

Petro Urrego calls himself “a progressive.” He is a former guerrilla fighter from the 19th of April Movement (M-19), a group that fought Colombian government forces for two decades before signing a peace agreement in 1990.

He later joined the M-19 Democratic Alliance party and now is the presidential candidate of Colombia Humana, the party he founded.

Petro Urrego’s candidacy brings hope to some sectors of the country, but opposition leaders fear the arrival of populism.

“The protests last May reflected the division that Colombia is experiencing eight months before the presidential election,” said Fernando Giraldo, a doctor in political science from the Paris Sorbonne University in France.

A Sept. 8 poll by the National Consulting Center ranks Petro Urrego in first place, with a voting intention of 17 percent. EcoAnalíticaSAS establishes that he has 21.6 percent and private firms indicate that he would have won Colombia’s presidential race if the election had taken place in September 2021.

The issue is the electoral system.

Colombia’s presidents serve for four-year terms, elected via a two-round process. All candidates run in the first round. If none receives the majority of the votes, the two leading candidates hold a runoff election to determine the winner.

Giraldo told Zenger Petro Urrego “has the best chance of winning in the first round. As of today, the rest would not have that chance,” said Giraldo.

Giraldo believes Petro Urrego has consolidated “his electoral niche, joining the segments of society that interest him politically [the popular and middle classes], which makes him the candidate with the greatest chances.”

That’s why opposition leaders and parties are prepping for the second round.

Petro Urrego’s opposition is focused on preventing him from winning the first round with more than 50 percent of the vote. They are making alliances to defeat him and his vice-presidential mate, he said.

“Petro’s opponents are doing everything they can to take him to a second round. They believe in a second round, they can improve their chances and eventually defeat him, which would be impossible in the first one,” said Giraldo.

Colombia Humana’s leader won the mayoral elections in 2012 and 2014 in Bogotá, the country’s capital, with 32.2 percent of the vote.

In the 2018 presidential election, he ran for a coalition that got 25.1 percent of the vote (4.8 million) in the first round, losing to the Democratic Center candidate Iván Duque, who received 39.4 percent (7.6 million votes).

With over 54 percent of the votes in the second round, Duque became the Colombian president for the 2018–2022 period. Petro Urrego received 41.7 percent (8.03 million votes).

“He managed to reach some sectors within the country that are experiencing social discomfort. On the other hand, the discredit of the political parties’ elites continues to grow in Colombia. Both scenarios are favorable to Petro.”

While the Colombia Humana senator campaigns across the country, the opposition does not hide its fears for his eventual triumph.

A Petro government would be a “disaster for Colombia,” said former President Álvaro Uribe Vélez (2002–2010), considered among the leaders of the Democratic Center party.

“Dr. Gustavo Petro is as bad an administrator as [Nicolás] Maduro [in Venezuela] and as a good speaker as [Hugo] Chávez,” posted Uribe Vélez on his official Twitter account.

“Petro is a disaster. Colombia lived in two months of national strike what Venezuela has lived for 20 years,” said Sen. Santiago Valencia (Democratic Center), referring to the outbreak against President Duque’s social and economic policies between April and June. The outbreak left at least 77 dead, including civilians and military members, and Petro Urrego supported it.

“Colombia Humana has not caused a single violent act in the strike,” said Petro Urrego on Instagram.

Valencia said Petro Urrego works through the “practice of hate and intends to break down businesspeople. He is a populist, which is what is killing him. People are beginning to know him. They are aware of his intentions. Today, Petro seems desperate. He is even comparing himself to Jesus.”

The polls are showing a trend, but at this point, they are not definitive, said Valencia.

“This is just warming up. As people begin to define their positions, Petro’s popularity will go down. He has already touched his ceiling, and the number of people intending to vote for him is decreasing already.”

He is the leader of the Historic Pact, a movement self-defined as “an agreement on what the different segments of the Colombian society find fundamental to take over the government, alternate power and build a new national reality based on democracy, social justice and peace.”

“Petro is a deeply rooted candidate. He is popular among the middle and business classes. He inspires hope because it [his candidacy] means moving a step forward in the country’s democratic process,” Rafael Vergara, former M-19 leader, told Zenger.

Vergara believes the best alternative for Colombia is in the Historic Pact coalition, comprised of left and center-left politicians.

He said that Petro triggers “a lot of fear among the country’s most powerful sectors because it [the possibility of him winning] means the rise of democracy, and democracy demands a much more equitable income distribution. They [the elites] try to present him as if he were a dictator, because they know perfectly well that he knows the mechanisms to carry out his political project.”

Giraldo told Zenger that Colombia “has quite a strong ideological polarization at the moment, which is not necessarily bad. What does seem serious to me is the total fracture and social fragmentation the country is experiencing, which is going to require many decades to rebuild.”

Translated and edited by Gabriela Olmos; edited by Melanie Slone and Fern Siegel