Frequent deworming at dog-racing tracks and kennels has allowed the hookworm to mutate and spread. 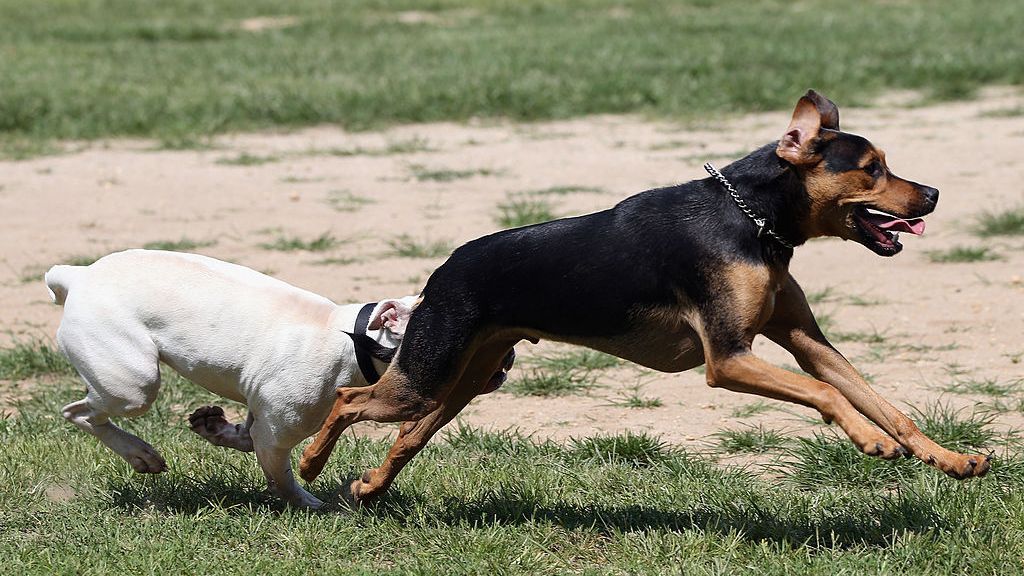 Researchers say dog parks can be risky for your pet now that hookworms have become resistant to common deworming drugs. (Bruce Bennett/Getty Images)

Dogs plagued by hookworms — bloodsucking parasites — may have longer to wait for relief as research has found these parasites are resistant to all drugs commonly used to treat the infection.

Ancylostoma caninum is a nematode parasite that uses its hook-like mouth to fasten itself to a host animal’s intestines. It sucks blood and tissue fluids, causing dramatic weight loss, as well as lethargy, bloody stools, anemia and other symptoms in both dogs and humans.

A team of researchers at the University of Georgia reported in a study published in the International Journal for Parasitology that 79 percent of greyhounds at racetracks are infected by multiple-drug-resistant (MDR) hookworms.

This study draws on previous research on MDR hookworms, first reported by the university’s College of Veterinary Medicine in 2019, and delves into where the problem emerged and how widespread it has become.

Ray Kaplan, study co-author and leader of the research team, said the infection would spread from the dogs at the racetrack to other pet dogs once they get adopted.

Kaplan, who once owned a greyhound, warned against taking pets to the dog park because of the risk of picking up the parasite. “If your dog picks up these resistant hookworms, [a cure is] not as easy as just treating them with medication anymore. Until new types of drugs [become] available, taking your dog to a dog park has to be considered a risky activity,” he said.

Dogs don’t need to ingest hookworm larvae, which live in soil, to get infected. The larvae can burrow through the dog’s skin and paws. Female dogs can also pass the parasite to their puppies through their milk. At racetracks, the researchers determined that the sandy ground easily transmits hookworms and is an ideal breeding ground for these parasites.

Currently, veterinarians use three types of deworming drugs to kill hookworms, and racing dogs are usually given deworming medicine every three to four weeks.

However, an analysis of fecal samples from greyhound adoption kennels revealed hookworms in four out of every five greyhounds tested. Those that tested negative, Kaplan said, were probably also infected because hookworms sometimes lodge in the body’s tissues and don’t reproduce or shed eggs until the infection worsens and spreads to the dog’s intestines.

Nearly all the fecal samples tested positive for MDR hookworms that can survive treatment with benzimidazoles, a deworming drug used in animals and humans, among other drugs.

Racing-dog breeding farms and kennels, where many infected dogs are kept, allow parasites to mutate and survive treatment. Parasites that survive frequent deworming procedures pass their drug-resistant mutations to successive generations. Over time, the resistant worms are all that remain.

MDR hookworms go undetected if veterinarians don’t perform the necessary tests on dogs during a check-up. These hookworms typically only become obvious once the infection has grown serious.

Kaplan and co-author veterinarian Pablo Jimenez Castro found that these hookworms appear to be treatable with emodepside — a dewormer approved for use only in cats. A national task force on MDR hookworms has since been formed to investigate treatment options.

Although dog hookworms also infect people, the infection is not the same. In people, worms burrow under the skin and cause a red, itchy rash. Children are sometimes infected by walking barefoot or playing in contaminated soil. Physicians treat people with corticosteroid ointment containing a dewormer, but Kaplan believes this is ineffective against MDR hookworms.