Critically endangered hatchlings caught on camera for the first time in more than a decade in Cambodia. 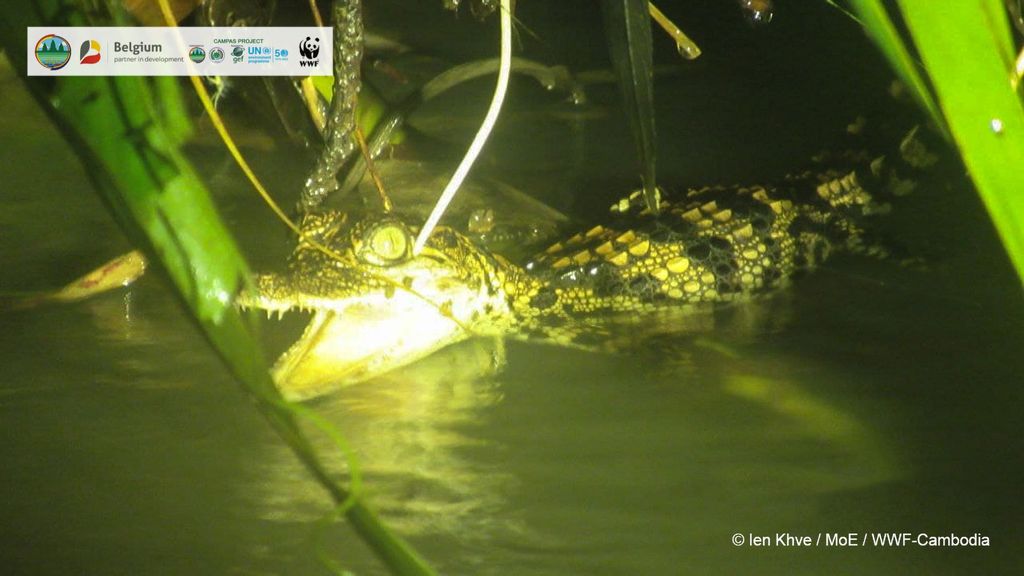 Siamese crocodile hatchlings are filmed taking a dip in water outside their nest — the first time offspring of these extremely rare reptiles have been documented in more than a decade.

Eight hatchlings of the critically endangered freshwater Siamese crocodile (Crocodylus siamensis) are seen in video from the Srepok Wildlife Sanctuary in Cambodia.

The World Wide Fund for Nature-Cambodia said in a statement that its researchers, along with colleagues from Cambodia’s Ministry of Environment, discovered the hatchlings during a regular field survey in the Srepok wilderness area this month.

“During this hatching season, the research team carries out regular field monitoring, and for this particular trip we spent four nights scouting the crocodile habitat locations … to observe the animal,” said researcher Sothea Bun.

“Then, the exciting moment came when one of our team first spotted the eye-shine of crocodile hatchlings.”

This latest find is the first photographic evidence of a Siamese crocodile breeding population after more than a decade of research in the wildlife sanctuary, the World Wide Fund for Nature said.

“The freshwater Siamese crocodile was once widespread across Southeast Asia, but disappeared from much of its range by the early 1990s,” the group said.

The key threats to the Siamese crocodile are habitat loss and degradation, poaching fueled by the illegal wildlife trade, hybridization with other crocodile species, hydropower dams, and destructive illegal fishing methods, according to the fund.

“Cambodia is a global stronghold for the species, with an estimated 200-400 individuals remaining in the wild. The total global population does not exceed 1,000 mature individuals.”

The researchers hope the hatchlings will help save the species from extinction.

“This development is considered a breakthrough in the study of the species in Srepok as former reports of breeding consisted of unconfirmed reports from many years ago and never before was photographic evidence of hatchlings collected,” according to Milou Groenenberg, the fund’s biodiversity research and monitoring manager.

“We were previously not certain if the resident population still contained breeding pairs to date, nor if any nests existed and if clutches successfully hatched,” she said. “The Srepok discovery indeed raises hope for Siamese crocodile conservation and survival in the wild and is a significant finding for the species in Cambodia and globally.”

The Ministry of Environment and the fund said they will continue to monitor the Srepok population and protect the habitat from illegal activities and destruction.

«Previous Post
Afraid Of Spiders? This Augmented Reality App Could Help You Beat The Panic»Next Post
Israeli-Grown Vanilla Aims To Disrupt The Industry