Archeologists find a solid gold Eye of Horus, as well as ivory reliefs depicting women bearing offerings to the gods. 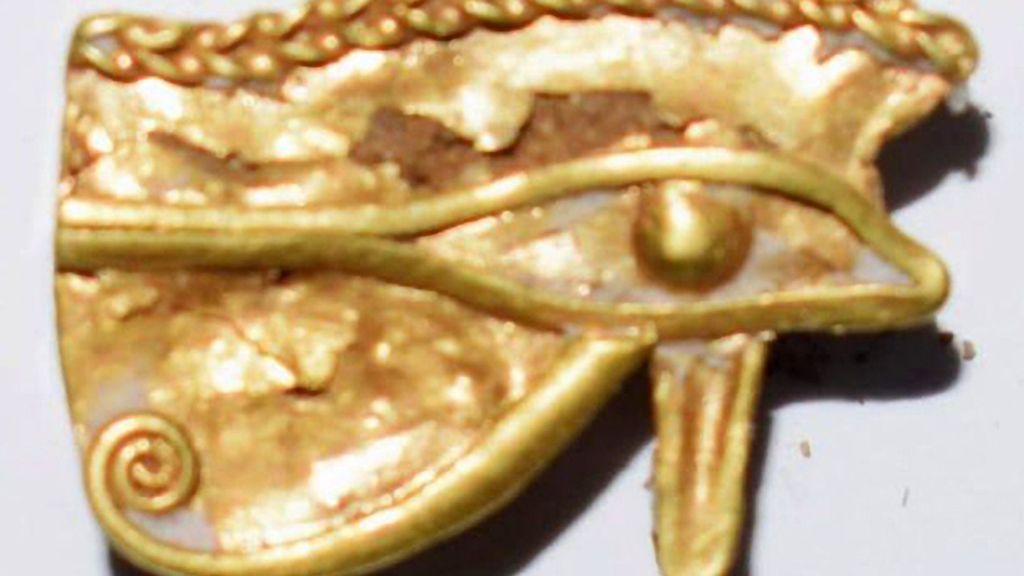 Tools used in religious rituals in ancient Egypt — including a pure gold symbol of the Eye of Horus — have been unearthed in the Temple of the Pharaohs in the country’s north.

Among the finds at the Tel El Farain archeological site in the Kafr El-Sheikh Governate are tools the Egyptians used in performing various rituals, including the daily worship of Hathor.  Archeologist found a limestone pillar in the form of Hathor, the goddess of the sky, of women, of fertility and love. Hathor was associated with motherhood and was also connected with the sun god Ra.

Clay vessels used in ceremonial rituals of Hathor were also in the temple, as well as small statues of the goddess Taweret and the god Thoth, a small maternity chair, a large offering holder, a pure gold Eye of Horus, and the remains of golden scales used in gilding other pieces. The gold Eye of Horus was a symbol in ancient Egyptian religion thought to have protective or magical powers.

Taweret was the goddess of childbirth and fertility, and Thoth is said to be the inventor of writing and a god of the moon and of learning. Horus was the son of the goddess Isis and the god Osiris.

Incense burners made of faience [glazed ceramic], one of which was decorated with the head of Horus, were also in the temple.

“[T]he mission discovered a wonderful group of ivory depicted scenes of women bearing offerings, scenes of the daily life … including plants, birds and animals, a large limestone lintel with hieroglyphic texts in relief, and part of a royal painting of a king performing religious rituals in Bhutto Temple,” said Ayman Ashmawy, head of the Egyptian Antiquities Sector.

“And some pieces are inscribed with hieroglyphic texts and lines, the five titles of King Psamtik I, and the names of the two kings “Wah Ib Ra” and “Ahmose II” of the 26th dynasty.” Pharaoh Psamtik I ruled Egypt from 664-610 B.C.

The discoveries were part of a series of excavations by Egypt’s Supreme Council of Antiquities.