Fossils found in Montana offer glimpse at cataclysm that killed off dinosaurs. 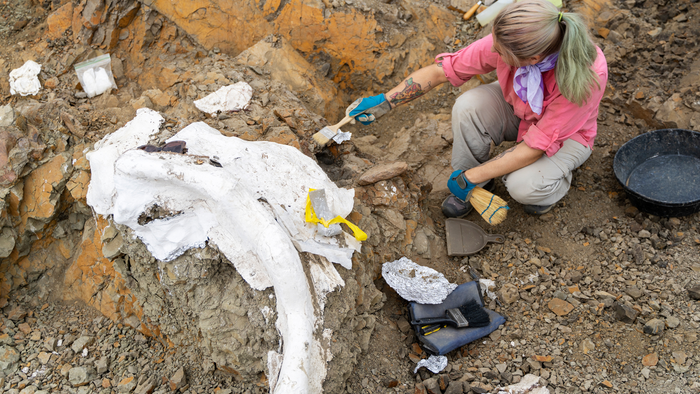 Paleontologists and volunteers found four dinosaur fossils this summer in the Hell Creek Formation of northeastern Montana, a geologic formation offering clues about the massive dinosaur die-off 66 to 68 million years ago.

“With these, we can better understand the processes involved in the loss and origination of biodiversity and the fragility, collapse and assembly of ecosystems,” said Mantilla, who is a professor of biology and curator of vertebrate paleontology at the Burke Museum.

The excavation team found the ilium (hip bones) of a theropod about the size of a modern adult ostrich. Theropods were related to the much larger Tyrannosaurus rex and other meat-eating raptors.

Researchers also found the hips and legs of a duck-billed dinosaur, as well as a pelvis, toe claw and limbs from another theropod that could be a rare ostrich-like Anzu or possibly a new species. A Triceratops skull and other fossilized bones were also found.

The four dinosaurs’ remains will eventually be held in trust for the public by the Bureau of Land Management and will become part of the Burke Museum’s collections after work at its preparation lab.

The triceratops fossils were found on public land and dubbed “Flyby Trike” in honor of the rancher who first identified them while piloting his airplane over the area. The team theorized that the dinosaur died on a flood plain, and its bones were scattered by flowing water or scavenged by a T. rex, before fossilizing.

In July 2021, the team excavated the dinosaurs as part of ongoing research into the so-called K-Pg mass extinction event that killed off all dinosaurs apart from birds. A designated National Natural Landmark, the Hell Creek Formation features clays, mudstones and sandstones deposited during the end of the Cretaceous period and the beginning of the Paleogene in river channels and deltas and occasional peaty swamps.

The Flyby Trike may be one of the last Triceratops living before the mass extinction, according to the team, which estimates that it lived less than 300,000 years before the cataclysm.

The team found the Flyby Trike’s horn frill and bones, ribs, lower jaw, teeth and the occipital condyle bone that was nicknamed the “trailer hitch.” The latter is a ball-shaped bone that connects the skull to the neck. About 30 percent of Flyby Trike’s skull has been found so far.

“Previous to this year’s excavations, a portion of the Flyby Trike frill and a brow horn were collected and subsequently prepared by volunteer preparators in the fossil preparation lab. The frill was collected in many pieces and puzzled together fantastically by volunteers. Upon puzzling the frill portion together, it was discovered that the specimen is likely an older ‘grandparent’ Triceratops,” said Kelsie Abrams, who manages the paleontology preparation laboratory at Burke Museum.

Fossilized plant materials were found with Flyby Trike. These included amber and seed pods, which may allow paleobotanists a glimpse at plant life and what dinosaurs ate.