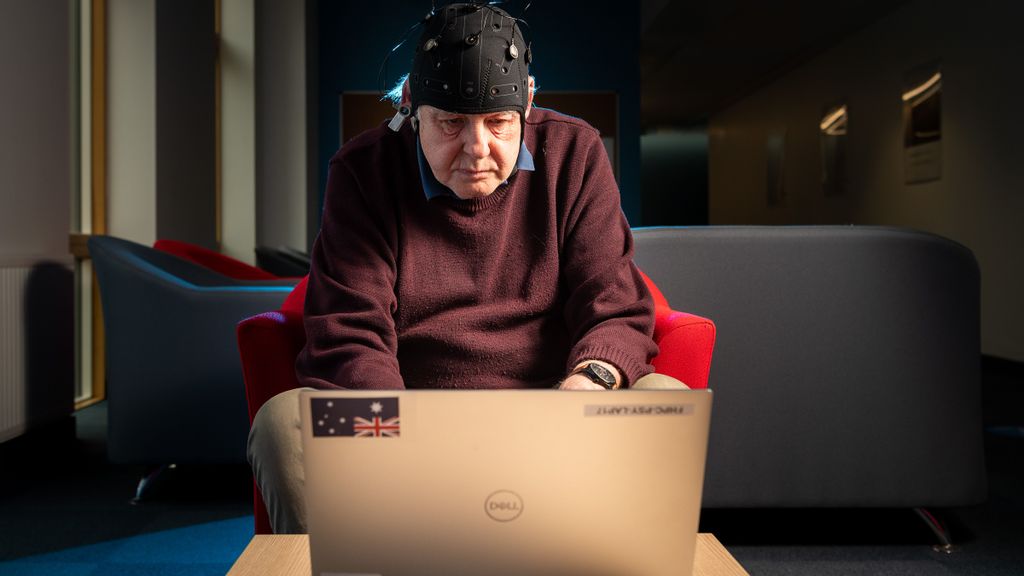 A volunteer, fitted with the Fastball EEG cap, takes part in the passive test developed at the University of Bath, which could diagnose Alzheimer's disease earlier than current methods. (University of Bath)

A new method of measuring brain activity may be able to diagnose Alzheimer’s disease up to five years earlier than current methods, leading to improved outcomes for patients, according to scientists at the University of Bath in southwestern England.

The Fastball EEG technology exposes patients to a series of flashing images for two minutes on a computer, while attendants measure their brain activity with an EEG app.

“Fastball offers a genuinely novel way of measuring how our brain is functioning. The person being assessed doesn’t need to understand the test, or even respond; they simply watch a screen of flashing images, and by the way we manipulate the images that appear, we can learn an enormous amount about what their brain is or is not able to do,” said neuroscientist George Stothart of the University of Bath.

Stothart was the lead researcher in a study published in the journal BRAIN, which described a technique that detects small, subtle changes in brain waves when a person remembers an image.

Currently, Alzheimer’s is diagnosed with a combination of subjective and objective reports of cognitive decline. A clinic administers memory tests, which are prone to biases such as assessment anxiety, as well as tests requiring verbal and written communication, which are ineffective for some patients.

“The tests we currently use to diagnose Alzheimer’s miss the first 20 years of the disease, which means we are missing huge opportunities to help people,” said Stothart. Despite the availability of scientific tools to test brain function, he said, none have been used to assess the brain’s ability to acquire, understand and retain information. Stothart and his team hope that Fastball will achieve that goal.

The study’s authors say earlier diagnosis would mean earlier lifestyle and medical intervention, potentially improving the effectiveness of those interventions and leading to healthcare savings of about 3 billion pounds [$409 billion] per year in the United Kingdom.

Alzheimer’s is the underlying cause of approximately 60 percent of dementia cases. In Europe and North America, it affects about 5–7 percent of the population.

According to the Fastball EEG team, their technology is inexpensive and portable. Easily scalable, it relies on technology already available at hospitals. The team is currently studying the earliest stages of Alzheimer’s disease at the Research Institute for the Care of Older People and the Bristol Brain Centre at Southmead Hospital. Their research is funded by BRACE, a U.K.-based charity that funds research on dementia and cures.

Over time, the team hopes the Fastball EEG will become a screening tool for Alzheimer’s and other forms of dementia, similar to the use of tests to detect high blood pressure during middle age.

The research team will continue to test the technology at earlier and earlier stages of Alzheimer’s progression and expand the types of brain functions measured, including language and visual processing. “This will help us to not only understand Alzheimer’s but also the many other less common forms of dementia,” said Stothart. “We are a long way from that, but this is a step towards that goal.”

«Previous Post
Afraid Of Spiders? This Augmented Reality App Could Help You Beat The Panic»Next Post
Israeli-Grown Vanilla Aims To Disrupt The Industry