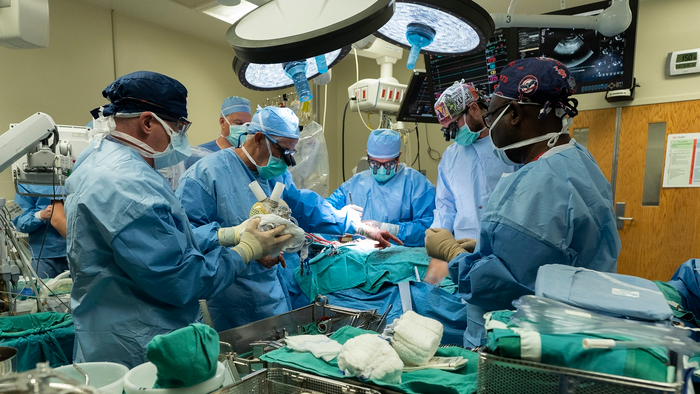 For the first time, surgeons have successfully implanted an Aeson artificial heart in a woman facing end-stage heart failure.

The surgery was performed by doctors from the University of Louisville and the Jewish Hospital at Louisville, using an implant made by Carmat, a French company.

Carmat CEO Stephane Piat said the surgery, the third of its kind in the United States so far, allowed them to complete patient enrollment in their early feasibility study for the device. It was also the first time the device had ever been used to help a female patient suffering from heart failure, according to Piat.

The 57-year-old Kentucky woman with severe biventricular heart failure received the Aeson device during an eight-hour surgery. She had undergone cardiac surgery several years ago and was referred to the Advanced Heart Failure Therapies Program at Jewish Hospital earlier this year for end-stage heart failure. She is recovering well in the cardiovascular intensive care unit at Jewish Hospital — one of only four programs in the United States approved to perform this clinical trial procedure.

Cardiothoracic surgeons Mark Slaughter and Siddharth Pahwa of the University of Louisville’s School of Medicine carried out the procedure on Sept. 14, announcing its success a week later. They also performed an implant surgery on a male patient last month, also at Jewish Hospital.

Currently, about 3,500 patients in the United States are awaiting heart transplants, of whom 900 are women.

“For the other half of the world’s population, completion of this procedure by the Jewish Hospital team brings new hope for extended life,” said Slaughter. “Size limitations can make it harder to implant artificial hearts in women, but the Aeson artificial heart is compact enough to fit inside the smaller chest cavities more frequently found in women, which gives hope to a wider variety of men and women waiting for a heart transplant and increases the chances for success.”

Aeson’s sensors estimate the patient’s blood pressure level and automatically adapt the cardiac output based on that information. The bioprosthetic device is implanted as a replacement for the heart and is attached to an external portable power source.

The Cardiovascular Innovation Institute at University of Louisville tested Aeson’s autoregulation capability, which allows it to adapt the flow of blood by detecting changes in blood pressure. Researchers there have conducted tests on artificial heart components and mechanical assist devices for many years.

“The varying pumping ability of the Aeson device increases its viability [in] more patients,” said Pahwa. “While other devices are set at a fixed rate or create a continuous flow, Carmat has developed the Aeson to automatically adjust the flow, creating an improved performance to meet the body’s changing blood flow needs.”

Aeson is being tested on patients with end-stage biventricular heart failure while they wait for a permanent heart transplant. In Europe, where it has already been approved, about 20 devices have been implanted. Aeson is being tested in the United States for final approval by the federal Food and Drug Administration.

“I am proud that UofL, Jewish Hospital and their doctors are leading the world in implanting this promising and innovative device that could offer hope and time to thousands of people, including our wives, mothers and other loved ones, in [the] coming years,” said Kentucky Gov. Andy Beshear, weighing in on the new development.