Whatever You Do, Don’t Peck A Fight: Prehistoric Penguin Was Nearly As Tall As Some Men 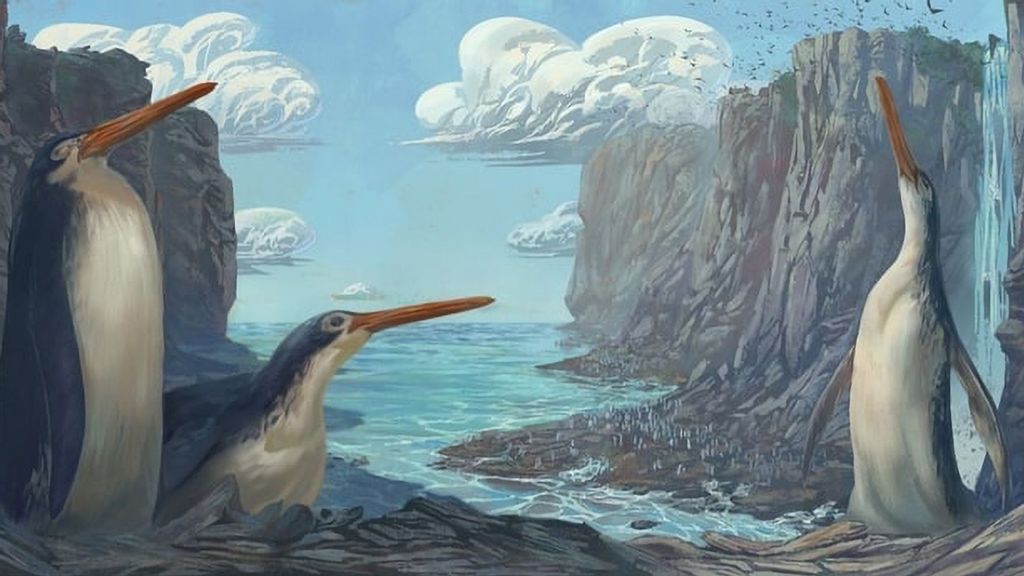 The 34-million-year old remains of a giant penguin that would have been 4.7 feet tall, found by schoolkids on a fossil-hunting trip, is of a previously unknown species, scientists have revealed.

A research team from Massey University and Connecticut’s Bruce Museum confirmed that the fossilized remains found by schoolchildren on a fossil-hunting field trip in New Zealand’s Kawhia Harbour in 2006 belonged to a species that was previously unknown to scientists. They named the species “Kairuku waewaeroa,” after the Maori word for “long legs.”

The study, appearing in the Journal of Vertebrate Paleontology, confirmed that this penguin species had roamed New Zealand’s coastline some 34.6 to 27.3 million years ago and would have dwarfed many of the children who discovered it, at an estimated 4.7 feet tall.

The researchers used 3D scans to learn more about the ancient creature.

“The penguin is similar to the Kairuku giant penguins first described from Otago but has much longer legs,” said Daniel Thomas, a senior zoology lecturer at Massey’s School of Natural and Computational Sciences. Otago is a region of New Zealand’s south island.

“These longer legs would have made the penguin much taller than other Kairuku while it was walking on land — perhaps around 1.4 meters [4.6 feet] tall — and may have influenced how fast it could swim or how deep it could dive.”

“Kairuku waewaeroa is emblematic for so many reasons. The fossil penguin reminds us that we share Zealandia with incredible animal lineages that reach deep into time, and this sharing gives us an important guardianship role,” said Thomas, referring to a recently discovered microcontinent that is almost fully submerged in the South Pacific Ocean.

“The way the fossil penguin was discovered, by children out discovering nature, reminds us of the importance of encouraging future generations to become kaitiaki [guardians],” he said.

“It’s sort of surreal to know that a discovery we made as kids so many years ago is contributing to academia today,” said Steffan Safey, one of the students who discovered the fossil 15 years ago.

“And it’s a new species even. The existence of giant penguins in New Zealand is scarcely known, so it’s really great to know that the community is continuing to study and learn more about them,” he said.

“It’s thrilling enough to be involved with the discovery of such a large and relatively complete fossil, let alone a new species,” said Esther Dale, another New Zealander in the group that discovered the fossil.