T-Ray puts in a busy month of performances and an album release, despite COVID and Hurricane Ida. 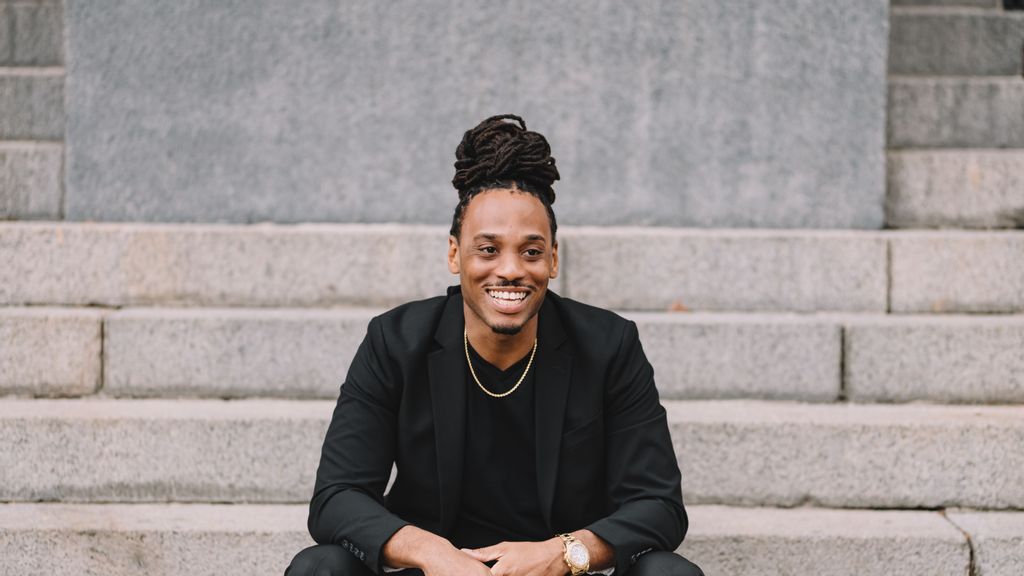 Juggling a full-time job as a music teacher while going back to school and performing open-mic nights became too much for T-Ray The Violinist. Faced with the tough decision of keeping his 9-5 job or becoming a full-time musician, the talented violinist took a leap of faith. For the last seven years he’s been living out his dream.

Louisiana native T-Ray watched his career emerge from playing at private weddings and parties, to performing for the New Orleans Saints and the NBA Pelicans, as well as opening for some of music’s biggest names, including Wale, Erykah Badu, and David Banner. Riding high on the success of his previous album, “Finally Free,” T-Ray The Violinist will soon release his latest project, “Visionary,” which was four years in the making:

Zenger takes a ride on the journey of T-Ray The Violinist from pupil to teacher to musician.

T-Ray: Everything is good. I actually just got back from a show in Pittsburgh. I went to Houston [to get out of the way of] Hurricane Ida, and it’s been nonstop trying to maintain, keep life together and keep moving forward.

Zenger: Not only COVID, but then we had Hurricane Ida hit Louisiana. For a performer, those situations can be detrimental. How have you handled it?

T-Ray: The pandemic impacted everyone in various ways. For me personally, I was without work for a solid three and a half to four months. I remember my last performance was Friday the 13th, and then I just got email after email saying things were canceled. Just like everyone else, I was in a state of shock. It was something we never dealt with before.

From a business perspective, just having everything taken away overnight… I had a lot of plans last year. I planned on doing “The Unexpected Sounds” tour. That was going to be on the back end of a project that I released in February called “Unexpected Sounds Volume 3.” That got canceled. I was going to release my debut EP, “Visionary,” and that got scrapped. It took some time to recalibrate.

There is always a blessing in disguise from things like this, and for me, it gave me chance to step back and look at life at large, not only as an artist. I said, when 2021 came around, I’m not letting anything stop me. This year has been really good. I have been executing even with the hurricane. September is a busy month for me. It’s a chance to see what we’re made of.

Zenger: I’m sure you have a greater appreciation for your craft.

T-Ray: Absolutely! One of the things I have been blessed in my seven years of being a full-time performer is my ability to perform in a multitude of capacities, including weddings, birthday parties and private events. I transitioned to doing shows, and started getting calls to do festivals. It really did make me appreciate everything that much more because last year was supposed to be that transitional year of me becoming a full-blown recording artist with my debut EP. Instead, I had to mentally prepare myself to again doing certain types of performances. I knew it was temporary, I knew it would eventually pass. I just didn’t know when.

Zenger: Your journey started with you being a full-time music teacher, while furthering your musical education, going to school, and booking shows at night to perform. A lot of sleepless nights, and then eventually you leaped out on faith, and it worked out. Tell us about it.

T-Ray: That’s interesting you bring that up. I was a full-time teacher in St. Tammany Parish [in Covington, Louisiana]. Between the time that I graduated from UNO [University of New Orleans] and the time I got hired in St. Tammany was about seven months. I was working two or three days a week with what is now known as “Make Music Nola” in the Lower Ninth Ward [in New Orleans]. In between that, I was doing open-mic nights, weddings and things to build my brand.

Once I started teaching, it was like, OK, I have a job that is an anchor for me, financially stable, and I’m able to build. If I wanted to continue doing these extracurricular activities, I could do so. But there was always something inside of me that said I need to make a decision. I took that leap of faith and went full-fledged with being an artist. It really was just putting myself in all these different spaces.

One of the opportunities I got early on was to play in the Bayou Classic Fan Fest November 2013 [in New Orleans]. I was still teaching at that time. People were still hanging on to CDs, so I remember sitting down in my apartment, me and my best friend, and we burned 200 or 300 copies of “Unexpected Sounds Volume 1.” We just gave them out. It was covers of, Jill Scott-“A Long Walk,” Jay-Z-“Tom Ford” and Jhene Aiko-“From Time.” It was songs that were hot at the time, and I figured while I had the platform of the Bayou Classic, I should give these CDs out for free. It spread like wildfire, and I started getting more and more calls. It was a get-it-out-the-mud situation as far as building a brand outside of education.

Zenger: What made the violin your instrument of choice?

T-Ray: I grew up in Baton Rouge, and when I was in elementary school, they had what was called the Pullout Program that had a visual arts teacher and a music teacher. In my case it happened to be music. They would come to our school on Mondays, Wednesdays and Fridays and pull us out of class, bring us to the auditorium, and we would learn how to play the violin.

At first it was just an outlet to get out of class. But it transitioned in me developing a passion for playing the violin on a deeper level. However, we’re talking about the early ’90s. Being a black kid, having the perception of that instrument being a feminine instrument, drove a lot of my peers away from doing it. The cool kids were playing, and then once they realized it was going to be a lot harder and take a lot of dedication, they didn’t want to play anymore. I happened to be one of the kids that stayed in class and the repercussions from that was, I got picked on. It drove me away from it after sixth grade.

When I got into high school, my best friend was Shaun Ward, and his dad is a well-known contemporary violinist, Michael Ward. He had just finished his CD “Continuum.” Shaun brought his CD to school, and that’s when I got back into orchestra. That was my sophomore year. Listening to this project, it was contemporary R&B. That sparked my interest, and from there I enrolled in strings again, and I found out about NOCCO (New Orleans Center for Creative Arts).

I auditioned at the center, and I was able to do the weekend and summer program my junior and senior years. I was in the jazz department. It was a different type of atmosphere, but it was inspiring and motivating. I thought I was going to be a bass player, but the violin just happened to be the instrument that I had the initial experience with, and it was also one that yielded a lot of opportunities for me.

T-Ray: I’ve been a full-time artist for seven years. I’ve had a multitude of different experiences during those years. One of the things I’ve been blessed with is to have people along the way who saw something different in me tell me, “You got it!” On the opposite end of the spectrum, I’ve been in situations where I’ve performed and I felt like I was there and playing, but people weren’t really hearing me. At times, it made me second-guess myself.

I’m thankful for all the opportunities I have had, but one of the things I realized is, I knew I wanted to be a performing and touring artist. That takes me recording my own music, producing my own music and just putting it out there in the world to attract those type of opportunities. I felt like it was time to literally just free myself. I was sitting in the airport in Houston, and the title just came to me: “I’m finally free.”

It’s crazy because a lot of times we put these restraints and restrictions on ourselves. It’s all a mindset. I continued to battle with the mindset and mentality of “I have to be doing this. I have to do everything from A-Z.” When really, if I just concentrate on two or three things, and hone my sound, hone my skills in this particular area, the opportunities will start to manifest. I felt that “Finally Free” was that cleansing and that capstone of being able to move forward.

Zenger: On Sept. 24 we are finally getting your long-awaited project, “Visionary.” You will be cataloging the journey in documentary form as well. I am sure you are excited to finally be releasing this body of work.

T-Ray: “Visionary” has been four years in the making. It’s another stepping-stone within the journey of being a full-time artist. I had a band from 2015 to 2017 and we just went our own way. I sat down and really had to figure out what direction I was going to go in. One of the things was, “OK, I play the violin, cool, but I also produce. What is my sound production-wise?”

After figuring out what that sound was going to be, I just finally found the name for it, eclectic fusion. After I found that sound, I said, “OK, I need to record a project and I need to put it out, and make my sound and my voice heard as T-Ray The Violinist, not just T-Ray The Violinist who plays the dope covers of the hottest songs.” It was a process of recording the string quartets. I had someone come in to transcribe the string parts that you will hear on the project, aside from the lead violin. There are a couple vocal features on there, as well: Sybil Shanell, Alfred Banks and Gladney.

It’s a very eclectic-sounding project. It has hip hop elements, R&B, soul and house elements. But they all culminate and are reflective of my style, from a production standpoint, but also from a violinist standpoint. Raj Smoove, my big brother— I call him “Mr. Miyagi” — helped me break down all the tracks. When I moved to New Orleans, he was the first person that I worked with. I feel like this is a really good debut of who I am to the world — not just as T-Ray The Violinist, but as my given name, Trenton Ray Thomas.

Zenger: I can’t wait to hear it, good luck with all of your endeavors. Is there anything you want to add?

T-Ray: On Sept. 25, I will be in Biloxi, Mississippi, opening for Frankie Beverly & Maze at the Gulf Coast Soul and Comedy Fest, so it’s like the perfect storm for that weekend, no pun intended. We don’t need any more storms (laughing).