‘Money Heist’ Returns For The Final Battle On Netflix

The hit Spanish show releases its fifth and final season in two volumes: September and December. 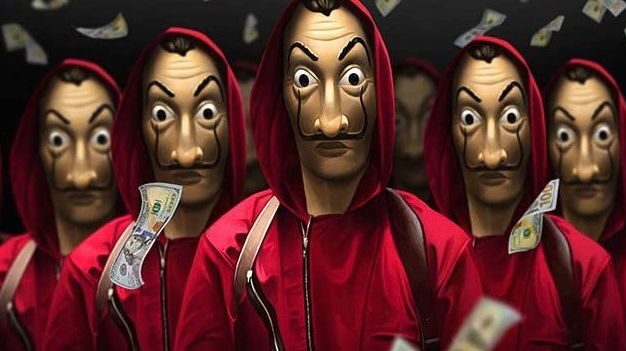 Throughout its four seasons, “Money Heist” had received critical acclaim for its sophisticated plot, interpersonal dramas and direction. Netflix renewed the show for a fifth and final season in July 2020. (Amazon)

The Spanish network Antena 3 launched the original “La Casa de Papel” (The House of Paper), a 15-episode Spanish-language heist crime drama, in May 2017. Created by Álex Pina, “La Casa de Papel” was released as a limited series in two parts.

Through its run, the series has received critical acclaim for its sophisticated plot, interpersonal dramas and direction. Netflix renewed the show for a fifth and final season in July 2020. It is being released worldwide in two five-episode volumes on Sept. 3 and Dec. 3.

“The series is driven by a criminal mastermind called ‘The Professor’ (played by Álvaro Morte) who has a plan to pull off the biggest heist in recorded history, robbing the Royal Mint of Spain,” said Jesús Colmenar, the executive producer and director.

“Aside from the exceptional performances from our amazing cast, what makes the series so exciting and popular are the scripts written by Pina,” said Colmenar.

“That’s right,” said Corberó. “Pina is a last-minute writer, and he is obsessed with some kind of vivid inspiration that fuels the rock ’n ’roll vibe of the show. Everything happens so wildly.”

Born in Pamplona, Spain, Pina began his career as a journalist, eventually working at the Europa Press Agency. His desire to write for television led him to work on various series as a writer and showrunner. Pina has teamed with Netflix on the series “White Lines,” a co-production with “The Crown” group, which began streaming in May 2020.

“Pina has his own way of working,” said Colmenar.

“Not me, the director, nor any of the actors can know two episodes ahead what is going to happen. This [the process] works because it helps us in having more information about how the dramatic arc will work. It also helps us in providing more room in which to change the story. We have the master through the line of the story, but the rest can easily change at the last minute,” he said.

“I know with Netflix, there are 190 countries watching us. If I thought about it on the set, I could go crazy. So, I just follow the script and don’t think of the audience,” said Morte, the series lead, who originally studied communications engineering.

Morte landed his first leading role in a feature film in the Netflix’s “Mirage” (2018). In addition to his acting work, Morte owns a theater company called 300 Pistolas, founded in 2012.

“I agree with Morte that the rapid changes could drive you nuts,” said Corberó, who has been acting since she was six. “But we had some pre-established rules before and during seasons one and two. By the time Netflix came into it, we had already lived the show and inhabited our characters, so we just continued on the same path. On a personal level, I’m still digesting all that has happened. I am aware of how unexpected and big this has been. But at the same time, it’s also beautiful.”

“What Úrsula said is accurate,” said Colmenar. “We always try to work with the same passion regardless of the audience we are targeting. This is something we’ve held onto from the beginning, and we didn’t change when we became bigger.”

One thing that changed with the show’s worldwide distribution was its public attention when shooting in Thailand, Panama and Italy. That was challenging, especially when adding COVID-19 protocols.

“We were mobbed with fans in Italy,” said Colmenar. “The show is very complicated to shoot, especially in the middle of the pandemic with all the security and safety measures.”

Colmenar just smiled when asked if he could offer a clue about season five.

“I have watched it. I can tell you that this is the biggest and most thrilling end of a show. We have pulled out all the stops. This is the final battle; the audience will get a vision of everything,” he said. “This is not the end of the bank robbery, but the end of ‘Money Heist,’ which is quite a huge thing.”