VIDEO: Is A Robot Chef Next? Engineers 3D-Print Chicken And Use Lasers To Cook It

The future may see a ‘Photoshop’ of digitized recipes for printing food. 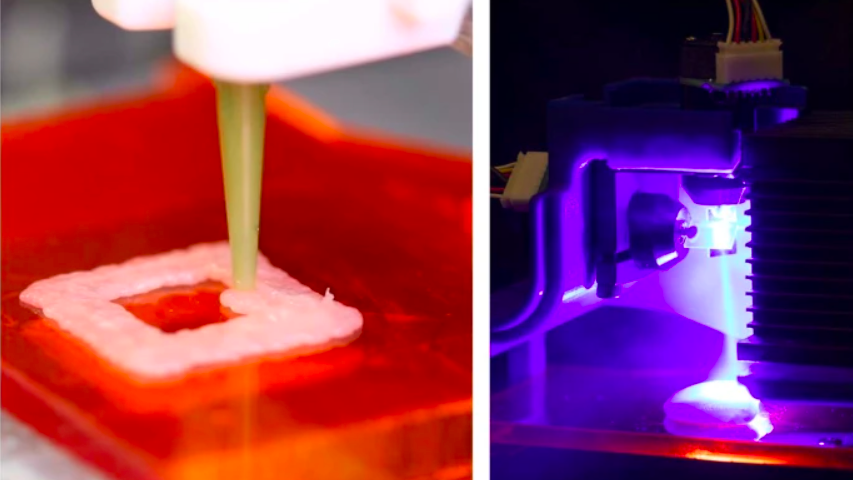 On the left, a 3D printer extrudes raw chicken onto a plate; on the right, a blue laser beam is directed at a sample of raw chicken after the printer deposits it. (Jonathan Blutinger/Columbia Engineering)

Fans of the kitchen from The Jetsons and food “replicators” from the Star Trek franchise may soon be able to digitally print dinner — and heat it at the touch of a button. And scientists say they might like it more than the real thing.

Engineers at Columbia University have taken a step toward making those sci-fi meals a reality by creating a single device that can use a 3D printer to assemble food and lasers to cook it.

“Food is something that we all interact with and personalize on a daily basis. It seems only natural to infuse software into our cooking to make meal creation more customizable,” said researcher Jonathan Blutinger.

The Columbia “Digital Food” team, led by mechanical engineering Professor Hod Lipson, has been working on 3D-printed foods for nearly 15 years and is now experimenting with multi-ingredient printing.

“We noted that, while printers can produce ingredients to a millimeter-precision, there is no heating method with this same degree of resolution,” Blutinger said. “Cooking is essential for nutrition, flavor and texture development in many foods, and we wondered if we could develop a method with lasers to precisely control these attributes.”

The technology developed by Columbia University researchers has moved closer to seeing unmanned appliances cook practically anything and tailor it for a user’s preferred flavor, texture and shape.

The researchers achieved food-safe temperatures by using a blue laser to trace a spiraling path on meat and an infrared laser to brown it on the surface. They learned that higher laser speeds raised a food’s temperature more quickly at first, and single passes of lasers at more modest speeds cooked food slowly.

The hardware and software is relatively low-tech, they say, and it needs support from programmers who can make the most of it.

“What we still don’t have is what we call ‘Food CAD,’ sort of the Photoshop of food. We need a high-level software that enables people who are not programmers or software developers to design the foods they want,” Lipson said. “And then we need a place where people can share digital recipes like we share music.”

For his study, published in npj Science of Food, chicken was put through a blender and then extruded through a 3D printer nozzle.

The chicken samples were printed at a thickness of 3 millimeters (about 1/8 inch). Scientists tested a range of cooking depths, moisture retention, flavors and color development options and compared laser-cooked and conventionally cooked foods.

They found they could brown the chicken for flavor and bring it to a temperature that made it safe to eat. The study also showed that cooking meat with a laser shrinks it 50 percent less than cooking it conventionally, and the high-tech product has twice the moisture and a flavor that’s similar to what consumers are used to.

High-tech food printing has already shown promise in NASA’s work on long-term space missions. The space agency awarded a $125,000 contract to develop 3D-printed food with a 30-year shelf-life for eating far away from Earth.