Afraid Of Spiders? This Augmented Reality App Could Help You Beat The Panic 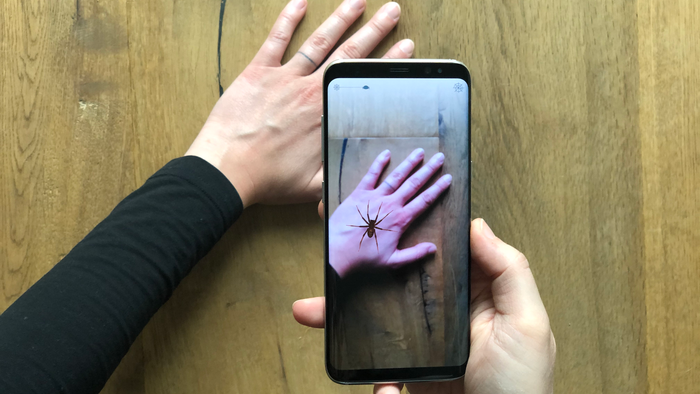 Psychologists have a new kind of weapon to help people who wrestle with arachnophobia: smartphone programs that augment reality with virtual spiders.

Researchers at the University of Basel in Switzerland have developed an app that has showed success during a clinical trial, one of several projects there designed to use new technologies to treat old mental health conditions.

People who used the app, called Phobys, demonstrated a reduced fear of spiders after trying it at home a half-dozen times for 30 minutes at a stretch. Users are prompted to scan a tabletop, a floor or their own arm from a few feet away. Then they tap on the screen to see a spider projected onto the surface they chose.

“It’s easier for people with a fear of spiders to face a virtual spider than a real one,” said lead author Anja Zimmer. She called the app approach “a low-threshold and low-cost treatment.” The research completed by Zimmer and her team was published in the Journal of Anxiety Disorders.

Arachnophobia is a common fear that imposes real limitations on sufferers. Fear of spiders, scorpions, ticks and mites can lead some to avoid social gatherings, limit their travel or obsessively check their surroundings for signs of menacing bugs. Even a photograph of a spider or evidence of webs can trigger screaming, fainting, sweating and heart palpitations.

Therapeutic exposure to real spiders can help reduce the effects of arachnophobia, according to the authors, but patients seldom want to expose themselves.

The team, led by Professor Dominique de Quervain at Basel, conducted a two-week clinical trial of Phobys with 66 people who suffered from a fear of spiders. Some completed six half-hour training units with Phobys, and others had no app to help them.

The subjects approached a real spider in a see-through box before and after each treatment, but got only as close as their fears allowed. The spider drew far less fear and disgust from the group that used the app, and those people were able to get closer to the animal.

The Phobys app has 10 progressively more challenging sets of tasks that allow arachnophobes to see and interact with virtual spiders. An assessment at the end of each level measures the user’s fear and disgust. The app, not the user, “gamifies” the treatment and decides when it’s time to move to the next level.

Users get encouragement in the form of animation and sound effects. Those with mild symptoms can use the app on their own, but researchers say those with more serious problems should use it under professional supervision.

As with many mobile apps, there’s a free version and a paid version. Users can test their phobia levels at no charge by downloading it from the Apple app store or Google Play; treating their condition by breaking down their fears comes with a $4.99 fee that unlocks all the levels. More than 1,000 people downloaded Phobys in its first month.