Famous “General Sherman,” the world’s largest tree by volume, is surviving flames thanks to an Ohio-based scientist’s research. 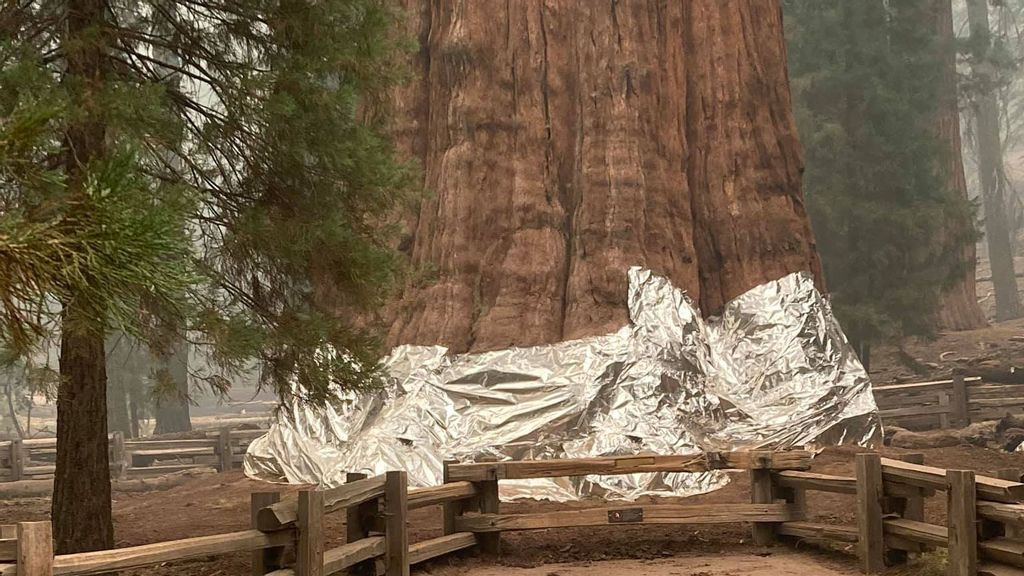 The giant “General Sherman” sequoia, protected by fire-resistant aluminum blankets, has so far been spared damage by wildfires in Sequoia and Kings Canyon National Park in California (@SequoiaKingsNPS/Zenger)

It’s another victory for “General Sherman,” 160 years after the Civil War.

The world’s largest tree measured by volume is 275 feet tall and over 36 feet in diameter at the base. Sixty feet higher, the stately tree is 17.5 feet across, according to the National Park Service.

So far the tree has survived two wildfires raging through Sequoia National Forest. Lightning strikes sparked the Paradise Fire and the Colony Fire this month in Sequoia and Kings Canyon National Parks. Hot, dry weather and strong wind gusts have propelled the fires, which have turned nearly 22,000 acres of forest into a wasteland.

“Despite the fire reaching the Four Guardsmen in the Giant Forest, fuel removal efforts by firefighters, combined with structure wrap applied by crews to the base of the iconic sequoia trees successfully protected these national treasures,” the National Forest Service said Sept. 19 on Facebook.

The General Sherman, estimated to be more than 2,000 years old, and other giant sequoias were wrapped in the aluminum blankets that can withstand extremely high temperatures.

Experiments involving fire blankets for wrapping a whole house were investigated in the laboratory and in prescribed wildland fires by Fumiaki Takahashi, a mechanical engineer at Case Western Reserve University in Cleveland, Ohio. Takahashi published his report in Frontiers in Mechanical Engineering after a decade of research.

He found that the blankets work “under severe heat-exposure high-wind conditions, but for limited periods of time,” according to the study. “In the laboratory experiment, two-layer thin fabric assemblies were able to block up to 92 percent of the convective heat and up to 96 percent of the radiation (with an aluminized surface).”

FireZat, based in San Diego, Calif., supplies fire blankets to the U.S. Forest Service and the Bureau of Land Management and to homeowners, according to its website. It claims the product can reflect 96 percent of radiant heat away from whatever it’s protecting.

While General Sherman has survived the wildfires so far, other ancient sequoias, some as tall as 200 feet, have been scorched or destroyed. The National Park Service has not yet made numbers available.

More than 7,000 wildfires in California this year have damaged or destroyed 3,289 structures and burned 2,326,430 acres, according to the California Department of Forestry and Fire Protection. The agency reports three fatalities as of Monday.

«Previous Post
Crickets, The Pre-Hispanic Delicacy Could Be The Food Of The Future»Next Post
Whatever You Do, Don’t Peck A Fight: Prehistoric Penguin Was Nearly As Tall As Some Men