Monumental rock sculptures made by the first hunter-gatherers could have been a fertility site. 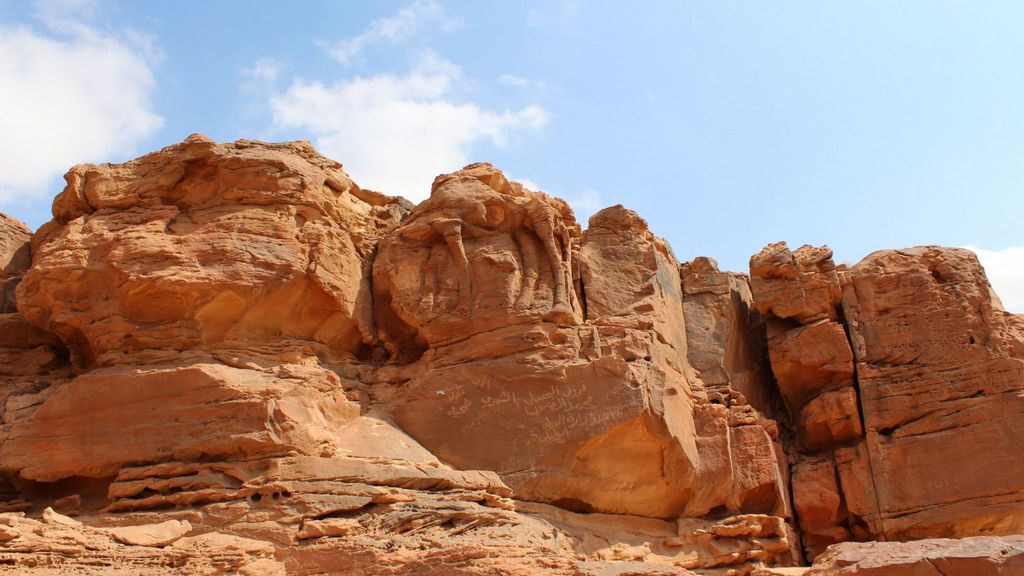 A carving of a full-size camel, found in northern Arabia, dates back to the Neolithic period. (Maria Guagnin/Zenger)

An international team of researchers investigating giant camel carvings etched into the side of rocks in the Saudi Arabian desert has discovered that the etchings date back to 6,000 B.C. That would make them four times older than previously believed.

Scientists had initially traced the 21 monumental reliefs at the Camel Site in Al Jawf in northwestern Saudi Arabia to the Nabataean period, 2,000 years ago, but the new study, appearing in the Journal of Archaeological Science Reports, revealed that the carvings are much older.

Researchers from the Saudi Ministry of Culture, the Max Planck Institute for the Science of Human History, the French National Centre for Scientific Research and King Saud University used cutting-edge dating methods to establish the correct age of the carvings.

Among the carvings, they found not only depictions of camels but also horses that would have roamed the Saudi desert during the Neolithic period (10,000–4,500 B.C.).

Rock art is extremely difficult to date, they said, because of the erosion it suffers over time.

To establish an age for the site, the team analyzed tool marks, assessed weathering and erosion patterns and used portable X-ray equipment.

The data indicated that the sculptures were made with stone tools during the 6th millennium B.C., at which time the desert was a lush green savannah where social groups of typically nomadic livestock herders let their cattle, sheep and goats graze.

“We can now link the Camel Site to a period in prehistory when the pastoral populations of northern Arabia created rock art and built large stone structures called mustatil [monuments with sandstone walls, found in northwestern Saudi Arabia],” the researchers said in the study.

“The Camel Site is, therefore, part of a wider pattern of activity, where groups frequently came together to establish and mark symbolic places,” they said. “Each relief would have taken 10 to 15 days of carving to complete, and the stone tools used to chip out the 3D shape and polish the surface would have been resharpened and replaced frequently.”

The complexity and size of the carvings have led researchers to believe they were made by a large group of Neolithic people who came together at times of celebration to create the art as a community.

“The weight gain and references to the mating season in the camel reliefs suggest that they may be symbolically connected to the yearly cycle of wet and dry seasons, to which these biological changes are linked,” the researchers said.

“Neolithic communities repeatedly returned to the Camel Site, meaning its symbolism and function were maintained over many generations,” said Maria Guagnin, the lead author of the paper.

«Previous Post
Fireflies’ Ultrasonic Sounds May Be Their Armor Against Bats»Next Post
Whatever You Do, Don’t Peck A Fight: Prehistoric Penguin Was Nearly As Tall As Some Men