Insects are rich in vitamins and cheaper than other meat sources. Their consumption could help reduce greenhouse gasses. 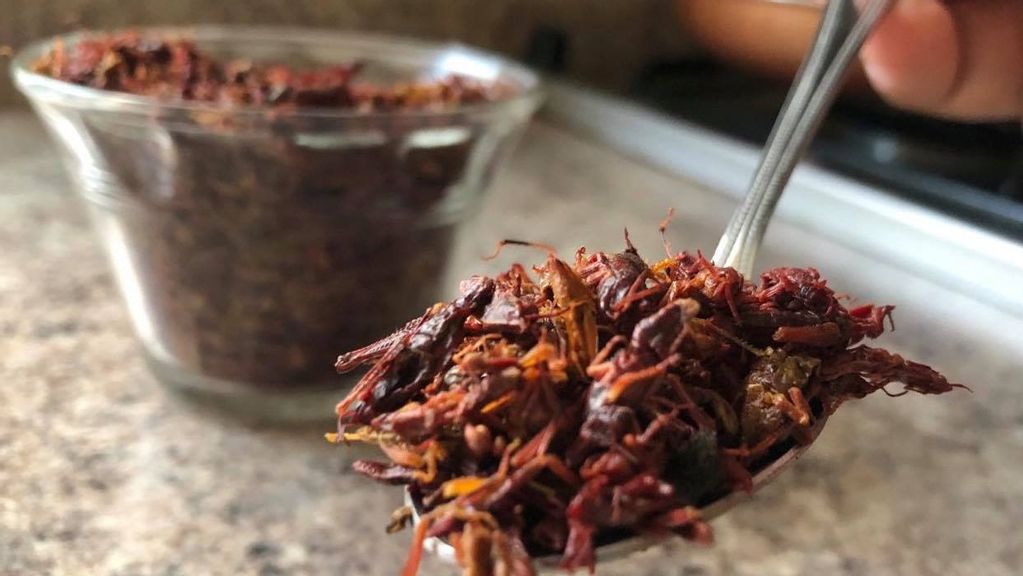 Rich in protein, crickets have been a food source in Mexico since pre-Hispanic times. (Julio Guzmán/Zenger)

Mexico’s gastronomy is famous, but foreigners may not be aware of how varied it is.

The country’s cuisine includes traditional ingredients, from corn, beans, peppers and tomato, to more exotic components — such as crickets.

Mexicans have been eating bugs since pre-Hispanic times and today, some consider them the food of the future.

Crickets have a strong, intense and slightly acid flavor, as well as a crunchy texture. The combination brings a unique experience to the palate. Cooks use them in different dishes, including tacos, tlayudas (roasted 11-inch tortillas, topped with beans, cabbage and tomato), stews or snacks.

Oaxaca is one of the states where crickets are often eaten. Oaxacans harvest them in the fields and sell them in street stalls all over the place.

Locals and tourists in Oaxaca may enjoy exotic tamarind sherbets with crickets and pizzas topped with these bugs. They even add crickets to their esquites — boiled corn kernels, with cheese and mayonnaise — bathe them with cricket salsa and serve them on a corn husk. Usually, they accompany these dishes with mezcal, the region’s traditional drink.

“When the region was wilder, there were plenty of crickets in the fields. I used to harvest them with other children. We purged the insects [empty their stomachs] and roasted them with salt, nothing more. We ate crickets in tacos with cheese or by themselves. I really like their taste. They do not need anything but salt,” said Maricruz Matus, who still lives in the state.

Crickets have many nutritional properties.

“They are rich in vitamin B1, B12 and riboflavin. Studies say insects have vitamins and minerals, which would be beneficial for us and an option to supplement our daily diet,” nutritionist Teresa Guerrero Cortés told Zenger.

The tradition of eating crickets is no coincidence in the country. The Valley of Mexico’s people have considered them a vital component of their diets since pre-Hispanic times. Ancient Mexicans saw insects as a source of protein. They enjoyed Chicatana ants and escamoles — ant or fly roe — as seasonal foods long before the Spaniards brought farm animals. Pre-Hispanic Mexicans complemented corn and vegetables with insects to balance their diet.

Crickets also played an essential role within the cosmogony of pre-Hispanic Mexicans, who used them to predict the weather.

For the pre-Hispanic civilizations, “there was always a connection between the interpretation of the environment and food. Crickets were abundant during the rainy season. The more crickets they had around, the better rains would come and the better harvests they would have,” Jonatan Chávez Sánchez, a historian at the Antiguo Colegio de San Ildefonso museum in Mexico City, told Zenger.

The insect’s relevance was such that one of the key places in the country’s history and present-day Mexico City bears the name Chapultepec, which means “the cricket hill” in Nahuatl, the tongue of the Aztecs. Chapultepec has a spring that used to provide the city of Tenochtitlan with drinking water via an aqueduct in the 14th century. Chapultepec was still the city’s water source during the viceroyalty period, from the 16th to the 18th century. A castle built in the area in the 18th century became Emperor Maximilian’s palace.

Crickets were important for Mexico’s ancient cultures, but the Spanish colonizers thought otherwise. Bernardino de Sahagún, a 16th-century missionary and one of the historians who recounted the fall of Tenochtitlan and the birth of then-New Spain, when describing the fauna of the Americas, referred to these insects as vermin.

“The Spanish did not see insects as a favorite food. They associated bugs with the pandemics that Europe had recently experienced, including the Black Death, and diseases that became epidemics overnight, such as smallpox,” said Chávez Sánchez.

As a consequence, the elite avoided eating crickets. They considered them to be “food for the poor,” Chávez Sánchez said.

Today, some cultures still refuse to eat insects. But the United Nations’ Food and Agriculture Organization (FAO) recommends insect consumption as a strategy to fight food shortages in several parts of the world, due to their high nutritional content and affordable price, compared to meat. In addition, insect consumption could help reduce the greenhouse gas emissions produced by the livestock industry.

But despite the FAO’s recommendation, nutrition experts suggest being cautious, since insects would not replace all meat’s properties. They do not provide the amino acids the body needs for protein synthesis, found in meat, eggs, caffeine and milk. “They have some, but that depends on the insect species,” said Guerrero Cortés.

“An in vitro study of the insect will tell you that it has a lot of protein, perhaps comparable to that of meat, but we still don’t know the amount of protein the [human] body absorbs. So, we cannot compare them to meat or any [other] animal food source,” she said.

The FAO estimates that 2 million people in the world include insects in their diet.