US Borders Remain Closed To Europeans, Stranding Many From Their Homes

Two Italian researchers launched an Instagram page to shed light on the impact of the travel ban on immigrants working in the U.S. 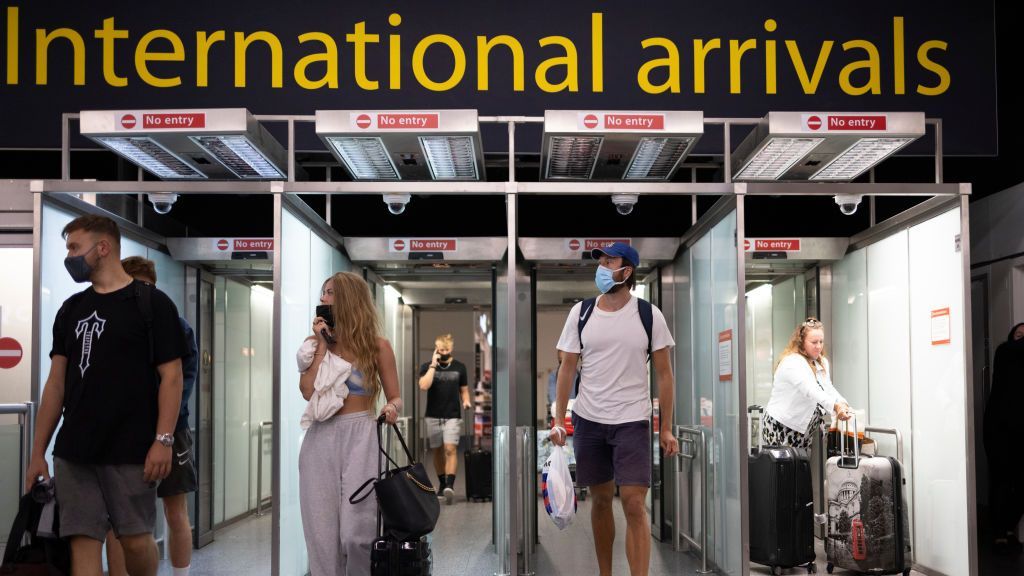 Travelers arrive at Gatwick Airport in London, England, on July 30. Restrictions to and from the UK were put in place as COVID-19 disrupted global travel. (Dan Kitwood/Getty Images)

Francesca Taraballi and Bruna Corradetti launched an Instagram page called “BringUShome,” aimed at connecting Italians and Europeans affected by the US ban on non-essential travel. The page soon had more than a thousand users, who share experiences and advice and support each other emotionally.

“We got the idea during the UEFA European Championship,” Corradetti, a biomolecular scientist at the Texas Medical Center in Houston, told Zenger. “While gathering with European friends, we realized that the fact that we couldn’t go home and be with our families was toning down our enthusiasm, and we understood that only by creating a group, we could make our voices heard.”

Taraballi, the director of the Center for Musculoskeletal Regeneration at the Texas Medical Center, and Corradetti are among the tens of thousands of Europeans stuck in the U.S. because, if they return to their “blacklisted” home countries, they might not be able to come back to their jobs.

In March 2020, as the COVID-19 virus spread across the U.S., then-President Donald Trump suspended entry to non citizens who had been “physically present” in Europe’s 26-country Schengen area for the previous 14 days. The ban also applied to those in the United Kingdom and Ireland. European Commission member states responded by restricting non-essential travel of U.S. citizens to their countries.

U.S. travel restrictions, which President Joseph R. Biden Jr.’s administration reinstated, has disrupted the lives of most visa holders. This measure, combined with the long waiting times and increased difficulty in renewing visas, has prevented many from visiting their families for nearly two years.

Corradetti, who is also an assistant professor at Swansea University’s School of Medicine in Wales, was in the U.K. when borders were shut down globally. She managed to return to Houston in October 2020, after waiting for months for embassies and consulates to resume activities.

Taraballi last visited her family in Milan in December 2019, a few months before the first COVID-19 outbreak.

The two Italian researchers’ pandemic travel hardships are echoed around the globe.

“We came across stories of grandparents that couldn’t meet their grandchildren or people that couldn’t attend the funeral of a dear one,” Taraballi said.

Elena Basso, an Italian associate research scientist at the Metropolitan Museum of Art in New York, lost her father to COVID-19 in March 2020. But because of the travel ban and document issues, she couldn’t reach her family northwest Italy’s in Piemonte for 15 months. When she finally did leave the U.S., she knew she was risking her job.

“I wasn’t sure they would grant me an NIE [National Interests Exception] to come back,” she said. “This past year has been one of the most stressful and painful of my entire life.”

After collecting similar experiences on social media, Taraballi and Corradetti realized that the problem was even bigger than expected. The fact that many U.S. embassies and consulates are still working at reduced capacity is creating a backlog that will be hard to address by simply lifting the ban, the two Italian researchers said.

Delays in visa evaluation processes are likely to persist even once the ban is lifted, Nicola Tegoni, an expert in immigration law, told Zenger. In 2019, the U.S. issued more than 500,000 non-immigrant visas to Schengen area and U.K. citizens, Tegoni said.

“In 2020, according to the latest available data, that number plummeted to 165,000, about one-third of the pre-pandemic amount,” she said. “And because 60 percent of foreign investments in the United States come from Europe, the ban is also hampering the volume of business between those two regions.”

Taraballi has been witnessing that trend unfold in academic circles.

“We are no longer finding people to hire because most of the workforce in the research sector comes from India, China and Europe,” she said. “We have had unfilled job openings for two years.”

That is why BringUShome members are also collaborating to find creative solutions to the travel restrictions.

Some of them have managed to reenter the U.S. after spending at least 14 days in a “bridge country,” one not affected by the ban. Croatia, Albania, Mexico and Santo Domingo have been popular waiting-period destinations.

“When people succeed in entering the U.S. thanks to the tips this community shares, it’s a huge success for us,” Corradetti said of “BringUShome.

But as well as being prohibitively time-consuming and economically expensive for most travelers, opting for the “bridge country” might be risky to one’s health, Taraballi and Corradetti said. While the rate of fully vaccinated adults in the Schengen area has exceeded 70 percent and has reached 80 percent in the UK, according to European Union and United Kingdom health agency statistics, that figure is much lower in many of the countries from which entry into the United States is now permitted.

“In general, travel restrictions can be helpful,” said Dr. Richard Martinello, an infectious disease expert at Yale Medicine. “They help diminish the amount of connectivity between groups, which does help to prevent transmission of the disease, so there’s some degree of benefit to it.”

With COVID-19 being endemic all over the world, “there’s a real question about how travel restrictions from selected countries help to benefit the country imposing them,” Martinello told Zenger.

Asked about a potential vaccine mandate for air travel, White House Press Secretary Jan Psaki stated on September 15 that the Biden administration has been “discussing and looking at ways to provide consistency, to provide clarity and steps that will ensure” international air travel “in an equitable way.”

However, it is still unclear when a new policy will come into force. Although the current rules “have been quite confusing,” Psaki said, “that’s not an indication of a new policy that’s forthcoming.”

Whatever the case, BringUShome’s founders say they are prepared to keep speaking up for as long as necessary.

“We launched this group to give voice to Italian and European citizens affected by these restrictions,” Corradetti said. “We managed to turn the interest of the Italian press towards the travel ban and start a conversation with Italian institutions. … BringUShome has turned into a community where people support each other — and that’s what matters the most.”