During a walk in the woods, the dog dug up a pot of hundreds of silver coins worth an estimated $90,000. 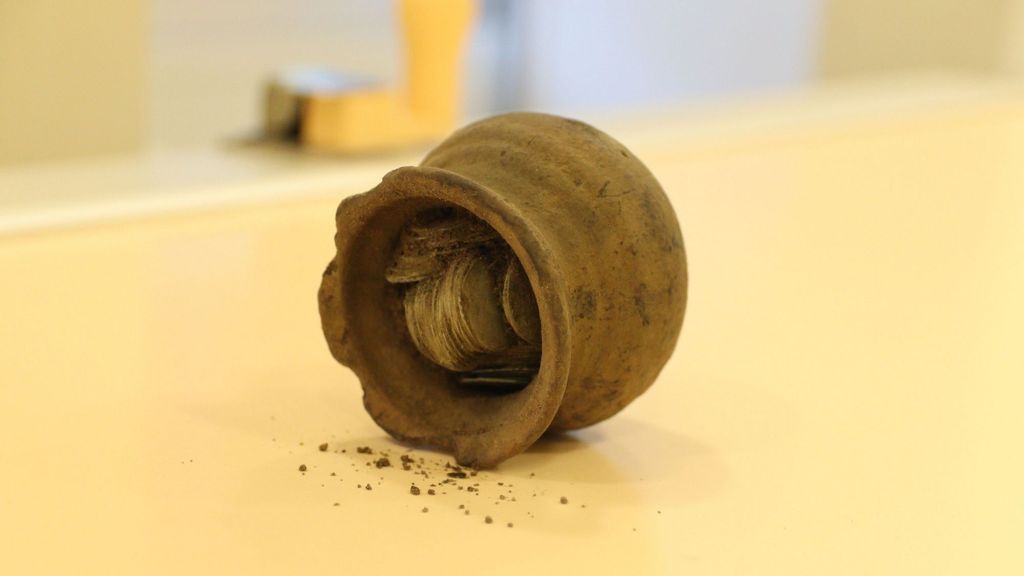 A clay jar containing silver coins from the 14th century was found by Masa, a dog, in Usti, Vsetin District, in the Czech Republic. (Valasske Regional Museum/Zenger)

Czech archeologists are excited by the discovery of a clay pot containing hundreds of silver coins from the 14th century — dug up by a dog on a walk.

The dog, named Masa, found the treasure in the woods in the village of Usti, located in the Czech Republic.

Recognizing that the small pot filled with silver coins was probably valuable, the dog’s owner handed the artifact over to the Valasske Regional Museum, about 20 miles away.

“One of the most valuable archeological finds in the history of our region is being investigated by experts from the Museum of the Wallachian Region,” the museum said in a statement. “A clay mug full of silver Prague groschen from the 14th century was handed over by a man who discovered the treasure together with friends on a walk with a dog in the village of Usti.”

King Wenceslaus II was one of the most important of the Czech kings. During his reign, he overthrew the kings of Bohemia, Hungary and Poland.

Bohemia was the kingdom’s largest producer of silver in Europe at the time, and the king capitalized on this by creating the silver penny, an example of which has been discovered in the clay pot. The silver penny went on to become one of the most widely used coins in Europe for centuries.

The silver was taken from a mine found in Kutna Hora in Central Bohemia. The king had assumed control over the mine, turning silver production into a royal monopoly, before issuing the Prague groschen, or “penny” in English.

The number of coins produced was very high because the Kutna Hora mine was one of the richest European silver strikes. Between 1300 and 1340, the mine is estimated to have produced as much as 20 tons of silver per year.

The dog walker who found the coins told the museum that his dog had dug up the clay pot, which was buried only a few centimeters deep.

Samuel Spanihel, the archeologist at the museum leading the investigation into the find, said, “We returned to the site hoping to find more artifacts, but there doesn’t appear to be anything else there.”

The museum said the initial analysis of the coins confirmed that they were Prague groschen issued during the second half of the 14th century by Wenceslaus II of Bohemia.

Although the archeologists had originally believed the pot only contained a few coins, a CT scan revealed hundreds more below the top layer.

The pot was dismantled on Sept. 8, yielding 374 coins plus three others that were stuck together and could not be identified.

Spanihel said, “I would like to thank the honest finders for handing over the treasure. They have helped reveal another piece of the region’s history and will allow the public to see these beautiful coins.”

The experts at the museum are continuing their research. They hope to build an accurate picture of the history of the coins within a year and then put them on display for the public.