Brazilian Travels The World On Foot 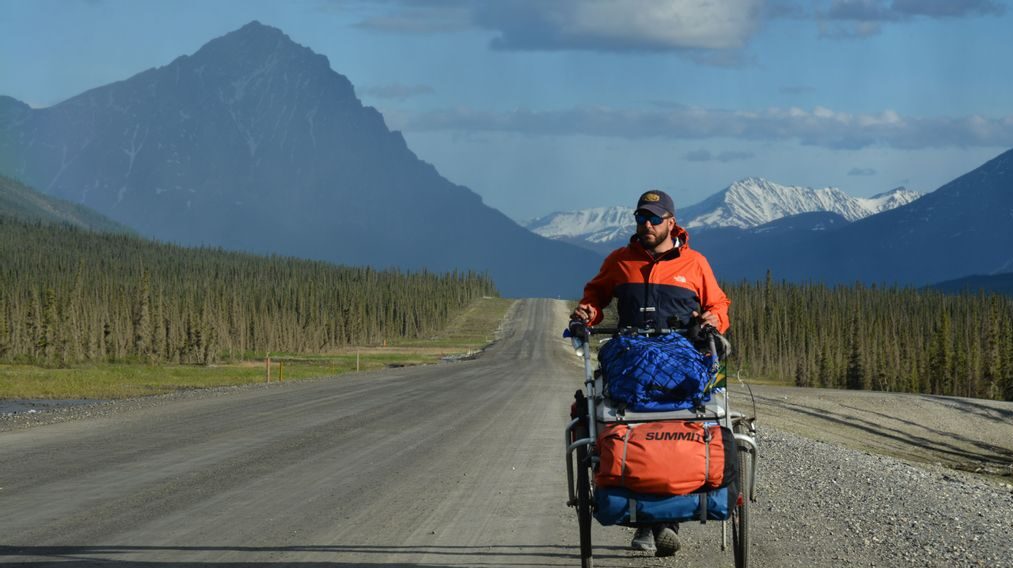 Brazilian Matias Tartiere has a singular approach to life and travel.

“Walking long distances through the deserts, forests, glaciers and towns of the world,” is how he describes his solo adventures.

Zenger caught up with him in Alaska, as he waited for government authorization, given pandemic restrictions, to walk into Canada.

Tartiere said his dream to travel the world on foot began four years ago, when he left his two jobs in Joinville, Santa Catarina, Brazil. “I worked for a while as a waiter at a snack bar, then I went to the mountain adventure store to tend to clients. I saved up for eight months and decided it was time to travel,” he said.

The Brazilian had already visited the neighboring countries of Argentina, Chile, Bolivia and Perú, in 2013 and 2016, but always by plane, car or bus, never on foot.

“For this trip, I made a little adaptable cart to take my basic items and be self-sufficient. I baptized the cart ‘el Potro’ (a male horse less than a year old),” he said.

He chose Turkey, located between Europe and Asia, as a starting point, since he wanted to cross the European continent to the Atlantic and then head to the Americas.

The wanderer found Montenegro and Bosnia the most welcoming, and France the most trying.

Tartiere landed in Istanbul, Turkey, in May 2017. In his backpack, he carried a few clothes, only one pair of shoes, toiletries and electronic equipment to record his walk. He checked el Potro, his tent, solar panel and personal items on the plane.

“In Istanbul, I took a bus to the city of Edirne, and then I started to walk to Bulgaria. I walked through Turkey in two days, and I slept next to the highway in the city of Demirköy.”

In his cart, he had canned food, bottles of water and a GPS, all key to his success. “Getting to Turkey was a cultural shock for me. Hearing the call of the mosques every day in that complex language, the prayers, it was different and intriguing,” he said.

In Bulgaria, he walked through 18 cities, including Sofia, the capital, where he admired the beauty of its architecture. From there he went to Romania, where he walked through Bucharest, the capital. He says it is one of the most beautiful historic downtown areas in Eastern Europe. In only 11 days, he crossed Serbia and Macedonia.

“I consider myself a very lucky guy, since I was never held up or robbed on my walk,” he said. He charged his cell phone battery, his laptop and other equipment with a small solar panel hooked to the cart. He often used the electricity at a gas station along the highway.

A long walk through Greece

In Greece, his walk took 50 days and left him exhausted. He stopped in Athens, as well as the beaches, beckoned by the crystaline waters of the Aegean Sea. Of the dozens of cities he visited, Ioannina, in the Northeast of the country, stands out the most, as well as Kalampaka and Kastraki, where he saw Meteora, which in Greek means “half sky.” This UNESCO World Heritage Site has six monasteries built on huge rocks 1,800 feet in the air.

In Albania, in southeast Europe, Tartiere wore through his only pair of shoes. “The blisters on my feet from walking forced me to buy another pair, which cost me $75,” he said.

Some days in Montenegro

In Montenegro, a small country in the Balkans, in the Southeast of Europe, Tartiere decided to take a five-week rest. It was November 2017, and the winter would be too long and hard for a walk to Portugal. Even though Montenegro uses the euro, it is not part of the European Union, so Tartiere was able to stay there for more than three months.

“Montenegro is small, but the people are very welcoming. I decided to take a break there, because if I left Montenegro and went into the European Union, I could only stay 90 days and I wouldn’t be able to walk to Portugal, because of the cold, the snow, the rain,” he said. In Montenegro, he worked as a volunteer at a youth hostel; in exchange, he was given food and housing.

When winter ended, in mid-April 2018, Tartiere continued to Bosnia and Herzegovina. He walked through 15 cities, always with his cart, el Potro. He spent two days in Sarajevo, the capital, the site of one of the most violent conflicts of the Yugoslav breakup from 1992 to 1995. The war led to 200,000 deaths and 2.5 million refugees. “In Bosnia, the people were very welcoming. I walked down the street, and they waved at me from their homes and even invited me for coffee,” he said.

From Sarajevo, he walked to the south of Bosnia, where he stayed for two weeks. He visited the city of Mostar, rebuilt in 2004, after it was destroyed in the war in 1993. He said he was moved by the bullet holes remaining in the walls of homes and buildings.

Next, Tartiere went to Croatia, where he visited the Plitvice Lake National Park. “It’s a fantastic place, with unique nature scenes,” he said. This park, with 16 lakes formed by waterfalls, has been a UNESCO Heritage Site since 1979. Tartiere said he never stopped walking along the coast of Croatia, bathed by the Adriatic Sea, famous for its warm water. Along the seashore, he walked an average of 12 miles a day.

From there, he moved on to Slovenia, where he stayed for five days. There, he had to buy his third pair of shoes. But close to the border with Austria, things got more intense.

“It was the most difficult walk I’ve done, because of the Alps. Austria is a very mountainous country, el Potro was heavier, and I have to admit that I really suffered. It took a lot of effort and calm breathing,” he said.

In Austria, the Brazilian traveled to historic cities, such as Villach, the second largest in the country, Sankt Margarethen im Lungau, and Salzburg, the home of the famous composer Wolfgang Amadeus Mozart. From Austria, he walked to Munich, the capital of Bavaria, in southern Germany, and he visited 10 cities in the region. Next, he walked through Liechtenstein, Switzerland, Italy, France, Spain and Portugal.

He had the toughest time in France.

“The worst country has been France, where they denied me a drink of water three times. That had never happened to me in any other country. In fact, in Bosnia, one of the best in terms of hospitality, when I was on a highway far from any town, there was a little house in the distance, and someone was calling to me. When I got closer, a woman asked me if I’d like a cup of coffee,” he said.

From Africa to Brazil

After walking for a week in Portugal, Tartiere took a flight to Morocco, in northern Africa, where he walked several more miles. From there, he flew to Brazil, rested some, and then flew to the United States.

In May 2019, before the pandemic, in the town of Deadhorse, Alaska, Tartiere restarted his trip. He walked for three weeks, from Deadhorse to Fairbanks North Star, where he rested for three months at a friend’s home. There, he uploaded content to his YouTube channel and raised funds through donations, so he could continue his voyage around the world.

Now, his goal is to wait until land crossings are reopened so that he can walk through the Americas until he gets to Ushuaia, Argentina, on the southern tip of South America. From there, Tartiere plans to walk across Asia, from Vladivostok, Russia, to Egypt, in Africa. He will then continue to Cape Town, South Africa.

He plans to complete his journey in 2024, if the pandemic doesn’t interfere with his plans.

Translated and edited by Melanie Slone; edited by Fern Siegel.