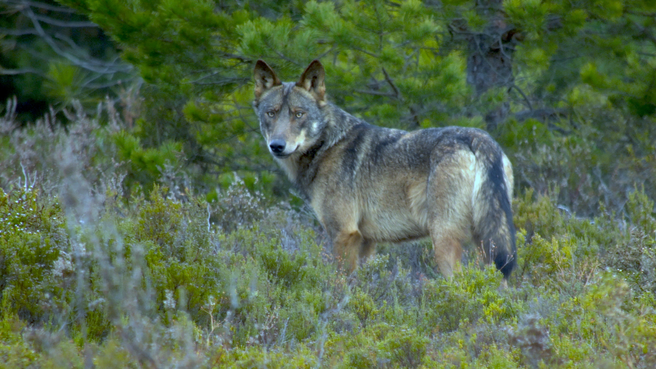 The future of the Iberian wolf, seen in its natural habitat in Sierra de la Culebra, has stirred heated debate in Spain. (Chisco Lema)

City dwellers and rural communities of Spain have locked horns over the central government’s decision to protect wolves.

In May, the Ministry for the Ecological Transition and the Demographic Challenge made wolves a protected species and banned hunting them effective Sept. 25.

Spain’s wolf population, of between 2,000 and 2,500, is estimated to be the second largest in Europe. It has been growing and ranging south since the 1970s when targeted hunting was introduced and poisons and traps banned. Attacks on domestic livestock and pet dogs have increased, according to groups opposed to the ban.

Wolf hunts had already been banned south of the Duoro River, which divides the provinces northeast of Madrid from the rest of the country. North of the river, landowners charge hunters thousands of dollars for the privilege of hunting wolves, which is allowed by the government on a lottery basis.

Agustin Palomino of ASAJA, Spain’s largest agricultural professional organization, told Zenger that there are no resident wolves in Andalucía, Spain’s southernmost region. “Banning wolf hunts in a place where there are no wolves is counter-intuitive,” he said. According to an official census, no evidence of wolves has been found in Andalucía since 2013.

Swedish researcher Hanna Pettersson told Zenger she spent much of 2020 in Spain to understand how three rural communities coexist with wolves, despite facing livestock losses.

“Spain should incentivize those areas where wolves are flourishing,” said Pettersson.

“Wolves are returning to places where they have been extinct for decades, sometimes centuries. The key challenge we face is preparing and supporting communities so that they can adapt and flourish, thanks to, or sometimes despite, their return.”

“While it may seem contradictory, in Sierra de la Culebra, wolves are hunted, but tourists also come to spot them,” Pettersson said. Wolves are “beautiful creatures” that do cause problems for traditional farming in Spain, she said.

Sheepherders still follow their flocks on foot as they have for centuries in the country but now tend to fence them in at night and use sheepdogs as guards.

Adhering to such traditions has proven costly and work-intensive, Pettersson said.

Compensation or subsidies are scarce for impoverished small landholders in places where wolves have returned. Conflicts have ensued when herders have been unable to prove to bureaucrats their animals have been wounded or killed by wolves.

“Even in the places that have wolves but don’t complain about them, like Sierra de la Culebra, the stress they have on top of all the other stresses, which they carry without complaining because they are used to it, it’s so unfair,” Pettersson said.

“If we as a society want wolves and have people to coexist with them, that’s what I mean by sending out the wrong signals,” she said, emphasizing that it would be better for the government to help places where coexistence is already successful rather than chastising them.

“We need the coexistence communities to thrive, to provide a positive example and illustrate to those who are anticipating the return of wolves that living with them is possible,” she said.

The province of Asturias had a successful approach to the return of wolves and resulting losses: a local NGO is certifying so-called “pro-biodiversity” lamb, assuring reliable prices for producers and environmental standards, she said.

In her study, which appeared this month in Frontiers in Conservation Science, Pettersson called for institutions to support transparent and local participatory decision-making when disputes arise over concerns about wildlife and a bolstering of trust in the decision-making process so that the “livelihood” of both people and wolves are maintained with minimal interaction.

“There are more than 5,000 attacks on livestock every year,” López-Schummer said.

Near Madrid, forest rangers long blamed livestock attacks on “wild dogs until a wolf was killed on a highway that passes through an area where they claimed there were no wolves,” he said.

Ranchers and herders must plead for compensation from regional governments for their losses, López-Schummer said.

“But even with a good lawyer, there is no guarantee of payment. That is the reason for their growing opposition to the hunting ban,” he said. “By renting land for hunting wolves landowners may be more assured of compensation.” Without it, López-Schummer fears a return to traps and poisons.

“Everybody wants wolves,” he said, “that’s clear. But in a controlled way so that wolves can coexist with livestock in Spain. There is a growing global conflict between life in the city and countryside. City people have a very romantic view of country life. They think it is like Disneyland, but don’t know what it’s like to live there.”

Some rural areas in Spain have seen a population decrease of more than 30 percent since 1975, as residents sought out job and other opportunities in the nation’s cities and growing suburbs.  López-Schummer said the hunting ban can only make life harder for stockmen and herders, prompting them to leave.