Some Flower Petals ‘Buckle’ To Produce Iridescence That Attracts Bees 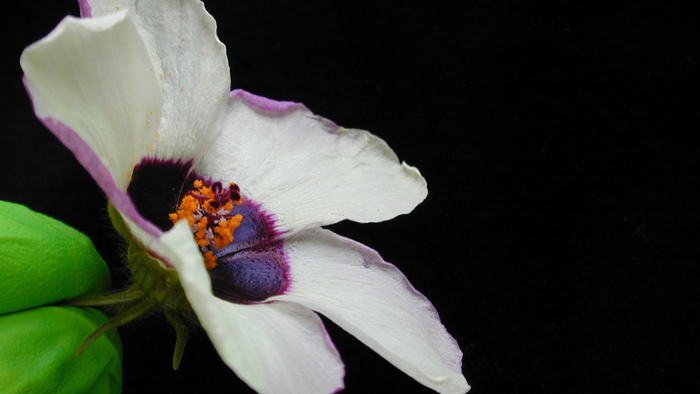 Mechanical buckling produces striations on some flower petals that cause iridescence that attracts pollinators. Striations start to form in the cuticle on the upper surface of the purple region of the Hibiscus trionum petal during the early stages of bud development and are fully established by the time the flower is fully developed. (Chiara A. Airoldi)

Flowers use not only radiant chemical color to attract pollinators but some also use iridescence, scientists have found.

Approximately 35 percent of the world’s crops depend on pollinators such as bees and wasps. As pollinator populations decline, the study of relationships and signaling between plants and pollinators is becoming increasingly important.

Before now, it was not known how flowers develop nanoscale ridges on the surface of their petals to diffract light, much like the multihued reflections on a soap bubble. Researchers from the University of Cambridge have confirmed that hibiscus plants employ buckling to deform the surface of their flower petals to produce iridescence. Their findings appeared in Cell Reports.

“The petal striations on hibiscus flowers develop during petal growth,” said Sarah Robinson, one of the researchers on the team, who also noted that her colleague Beverley Glover’s team was the first to discover flowers’ iridescent properties.

According to Robinson, Glover and her team had suspected that the iridescence was caused by mechanical properties triggered by the expansion of the petals, producing a form of buckling.

That theory was tested with an automated confocal micro-extensometer (ACME) — a robotic system developed by Robinson to measure the mechanical properties of plants. They applied a specific force to stretch immature hibiscus petals that had not yet developed striations to determine whether it was possible to mechanically induce the patterns.

“The ACME … gave us the unique chance to investigate [whether] hibiscus striation patterns could be mechanically induced,’’ said the study’s lead author, Chiara Airoldi.

“We saw striations appear almost instantaneously when a mechanical stress was applied. This told us that it was buckling that was causing a wrinkling of the petal surface and not a slower biological process,” said Robinson.

On measuring the induced striations and finding they had the same properties as those produced naturally, the researchers were surprised to discover that they could induce striations at 90 degree angles to those that occur naturally.

For Robinson, this means the striations’ orientation is not fixed. However, the researchers could not induce striations in other parts of the petals, suggesting that the formation of striations is under genetic control.

Buckling occurs in the flower’s cuticle, the researchers found. The cuticle is a waxy surface consisting of two layers covering the epidermis of flowers and plants. Each layer has a distinct mechanical property, which makes buckling possible.

“Using [the] buckling theory, we [developed] a model and recreated the experiment. This allowed us to illustrate why some cuticles wrinkle and others do not, emphasizing the role of layers,” said Carlos Lugo.

“Using cryo-SEM (scanning electron microscopy) fractures, we have been able to show that the cuticle that striates has two physically distinct layers. We are further investigating the development of hibiscus petal striations through a combined approach of mathematical modeling and [taking] measurements of [the] physical properties of the layers,” said Airoldi.