Former footballer has launched Mission1Race to help show that we are all uniquely alike.
By Percy Lovell Crawford September 16, 2021
Facebook
Twitter
Linkedin
Email 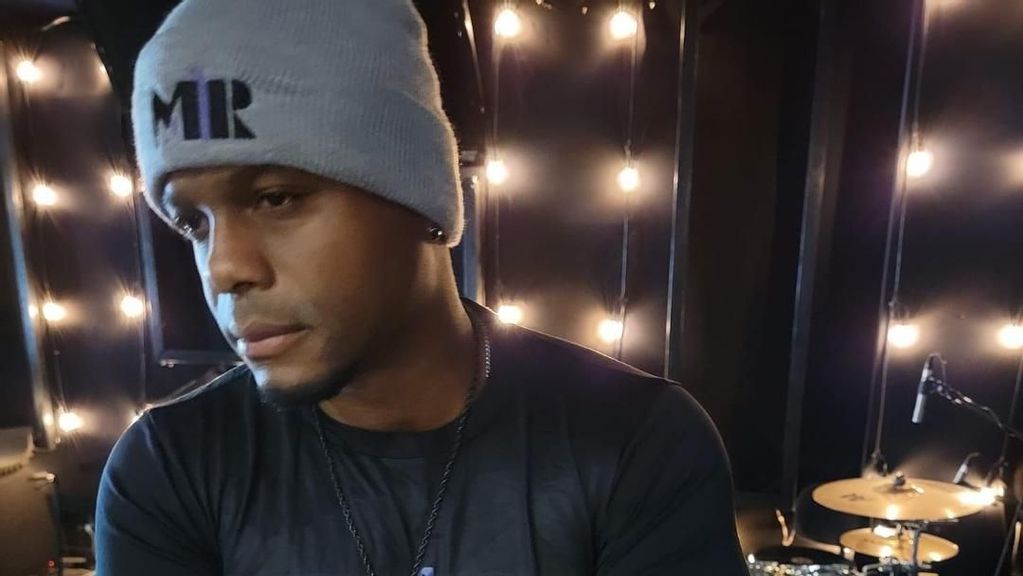 Richard “RichRel” Reliford in the recording studio. He will release his “SonShine” album on Sept. 24. (Team M1R)

Growing up in suburban Chicago, Richard “RichRel” Reliford experienced the good, bad and the ugly. However, his faith won’t allow him to focus on the negative. Instead, he uses that energy as teachable moments through his Mission1Race foundation and his music to bring people together and gain an understanding as to why to not hold on to hatred.

On Sept. 24, he will be releasing his “SonShine” album, which features songs meant to uplift spirits with music that everyone can enjoy. “RichRel” opens up to Zenger News about a trip to Africa that changed his perspective on life, the creative process behind his new album and much more.

Zenger: How did, Mission1Race become your mission?

Reliford: I don’t push my faith on anyone. But it’s hard for me to separate the love of God and therefore the love for people that drives me. I’m a mission-driven person. It would have to go back to my youth of me being born and raised in the Chicago suburb of Bolingbrook, and experiencing the beauty of diversity and the brutality of racism. I had friends and coaches who are awesome, but also experienced physical, emotional and verbal abuse because of racism. So, that dichotomy is always there. I’ve seen it in sports, in the southwest suburbs in Chicago, in America and in my ministry.

All of a sudden, I joined World Vision [a global Christian humanitarian organization] and two things happened. First, I visited Africa, and it blew my mind because we have been misled about what Africa is. Just having freedom in the ’60s in Uganda, which is run top to bottom with Africans, it blew my mind. It kind of took some of the anger off of me and made me realize, we’ve been lied to. It didn’t make me pro black, but it made me less volatile because my history didn’t start on a ship. I can let some of that go.

I’m in South Africa now on another trip, and that’s when it really broke me. I experienced a post-apartheid [situation], and I thought to myself, this is way more intense than I thought, and this is not just domestic, this is a worldwide problem. People are believing a lie that we are of different value, and/or better or less than, when everyone should just be thankful for with who and how they were created.

I can’t tell this in any short way. I come back to the States, and I’m getting off of a stage, spreading a message because we’re World Vision. We are preaching and inviting people to partner to help extreme poverty. But what God was doing was giving me a voice and my message. It’s about hearing clearly from God. My question I would ask the audience is, “How many times have you clearly heard from God?” I would ask old and young. And the number I would get, Percy, it’s only a handful of times that we really hear from God. And God pressed this on me, what’s our responsibility when we do? Because it’s precious and rare. Shame on us if we don’t do it wholeheartedly. I get off the stage and God was like, “I’m glad you said that because I got something for you to build.”

He gave me the seed for Mission1Race in 2010. While working with a non-profit and doing other things, I started submitting the paperwork to create that organization. When God told me it was going to start with a 250-mile run from San Diego to Santa Barbara, I did what every good person in the Bible does: I started negotiating. Wait, did you say, run part of it, and then bike part of it? “No, you are going to run, from mission to mission. I am reclaiming the story of these historic missions on the coast, and you’re going to tell people that we are uniquely the same.” We are unique, so we don’t have to assimilate. Be black, be Hispanic, be white.

Let’s just say I get a chance to talk to someone who I feel is walking in bigotry and hate. One goal is to stop it and build systems to stop it, but I really want a racist not to be racist. I didn’t say I want to round them up and muffle them. I actually want to ask them, “What in your heart has lied to you that you can judge me? Or be a sexist, or homophobic, go down the list, think you’re better than a person because they served time in prison?” I’ll challenge all of that with Mission1Race. It’s challenging the value of humanity from the false degrees of separation. That’s what fuels me. I can’t separate that mission from my music. Whether you call it gospel or not, whether it sounds churchy enough or not, it depends on the song. I’m also not trying to alienate people.

Zenger: This mission to abolish inequality isn’t just about race for you.

Reliford: It’s tough, but God has built me for this. I have always kind of been an outcast. I’ve never fit in any of the boxes. I did football, but music was actually first for me. My father was a by-ear blues guitarist. I was making tracks and beats talking about a different subject matter because I didn’t grow up in the church coming up in Chicago. If I tell you some of the hooks I had then, it wouldn’t be the same album. I have been doing that all of my life.

I play the guitar on “My Always Love.” That’s my heart, that’s my passion, bringing folks together. And that’s not weakness. I know that doesn’t sound militant enough for some people, but calling someone to be one with you is actually more than just give me my rights and my respect, and leave me alone. I don’t want a new separate but equal. I want to a right-next-to-and-equal. I want in the same building and equal. I want in the same program and equal. We gotta be careful because right now it’s like we’re trying to build this separate society. No, we’ve been there. We don’t want that.

Zenger: You played Division 1 football at the University of Akron. Does part of the togetherness you’re calling for stem from that?

Reliford: You just hit it: sports, and athletics. If you look up the word, community, one definition is, though we are many parts, we are in harmony and are one. No one’s asking anyone to destroy that. Community says, you don’t have to be in close proximity and all the same. Instead, you share common interest, causes and ideas, and that builds an affinity towards a person and those walls come down.  Sport does that. If a classroom is run right, it does that, and the diversity of a team does that.

I can’t tell you that the white man is the problem for everything. Do you know what the problem with that is? You would have to throw out Coach Guernsey, my youth football coach, who was one of the nicest men to me in my life, who mentored me. I would have to throw out the three people that introduced me into gospel. God was very intentional about the fact that, “That’s not your story, Richard. Be proud to be black and be who you need to be, but you love on these folks, don’t go left because it’s not real.” Anytime you take a paintbrush and say, “all of these people or all of that, or everyone from here,” it’s usually wrong.

Zenger: Absolutely! Your album, “SonShine,” seems to have something for everyone on it. I guess it follows your goal to spread diversity. Was that intentional?

Reliford: It was. My first performance ever was, ‘SonShine.’ Shout out to The Tabernacle Church in South Southaven, Mississippi, and Bishop Vincent Matthews, who is the head of all missions for The Church of God In Christ. Using a very traditional denomination like that, you would think it would not be a match. And yet this man is such a movement-minded man, I had to give him his props. He invited me to come out to this event on July 3 and 4, performing on Saturday and then saying a message on Sunday.

The song was “SonShine,” which came from brokenness. “SonShine” is because the enemy didn’t want me here. I went through some struggles in my life very recently that actually had me praying for death. I was saying, “I’m ready to go.” There is some spiritual truth when God says, “The sun is coming up tomorrow.” The lie that the enemy tells you is, “It’s always going to be like this.” No, the sun will come up tomorrow means God is still running things and there is still hope. I did a testimony in church and did the song, and God reminded me why he gave that to me.

Every song is eclectic because of Rickey Lumpkin II, a producer I work with. I want to prop him out because I’ve made a lot of music, until this phase of my life, and it’s all about the collaboration. I have a ton of songs that are unreleased. I would go to Rickey, and he would say, “I’m feeling that one, I’m not feeling that one.” That was very humbling for me. All of those songs had stories. God gave me gifts. “Good Friday” was actually written on Good Friday, while I sat outside a mall on my MacBook. “SonShine” has something for everyone because I’m all over the place and because of the diverse person I am.

Zenger: Tell us about the event you have lined up for Sept. 24, the release date of “SonShine.”

Reliford: The event will be a fundraiser concert. Here is where you will see the marriage between Mission1Race and RichRel. It’s branding, we have apparel, and my intention is, if I can pull people together, why not have a cause? I’ve done Iron Man, marathons and all that, but that was because of World Vision at the time. If you’re going to do something that’s entertainment, for me attaching it to a cause where there is so much need is a must.