Study: Modern Snakes Are All Descended from a Handful that Survived Dinosaur Extinction

Snakes that survived the blast went on to fill the evolutionary gaps left by the mass extinction. 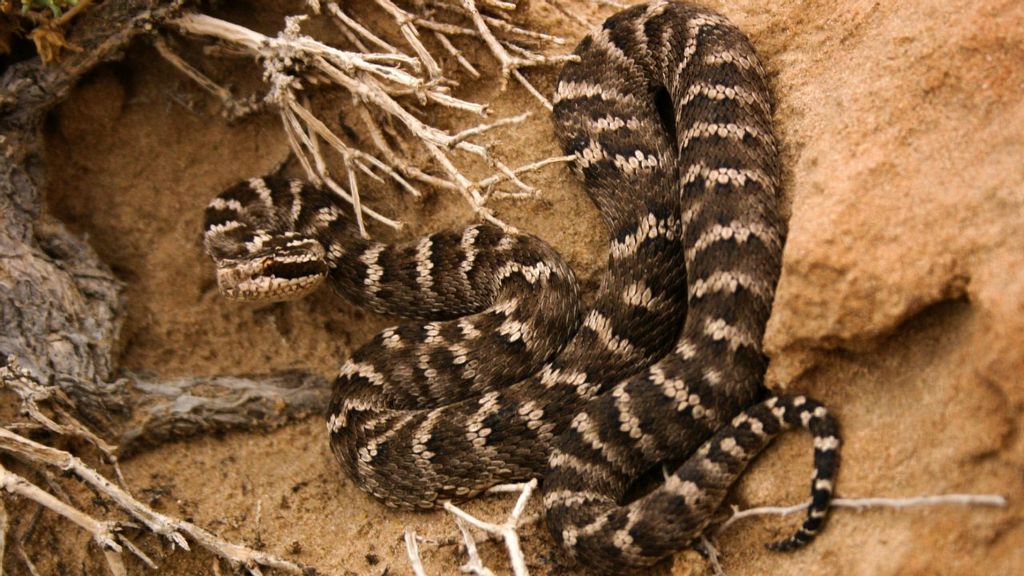 The Mongolian Pitviper, like all modern snakes, evolved from snakes that survived the mass extinction event caused by an asteroid impact 66 million years ago. (Nick Longrich/Zenger)

Modern snakes evolved from a handful of species that survived the mass extinction event that wiped out the dinosaurs, according to British researchers.

All 4,000 living snake species can trace their origins back to just a few snakes that survived a cataclysmic event 66 million years ago, they say. That event, known as the Cretaceous–Paleogene extinction, ended the reign of the dinosaurs and killed three-quarters of living organisms on Earth. The modern scientific consensus is that a violent collision with a meteor or a comet, between 6 and 9 miles wide, caused it.

Scientists at the University of Bath in southwestern England and fellow researchers from Bristol, Cambridge and Germany used genetic analyses of modern snakes to pinpoint their evolutionary origin. Their study was published in the journal Nature Communications.

“Our research suggests that extinction acted as a form of ‘creative destruction,’” said Nick Longrich from the Milner Centre for Evolution at the University of Bath, one of the study’s authors. “By wiping out old species, it allowed survivors to exploit the gaps in the ecosystem, experimenting with new lifestyles and habitats.”

“This seems to be a general feature of evolution,” Longrich said. “It’s the periods immediately after major extinctions where we see evolution at its most wildly experimental and innovative. The destruction of biodiversity makes room for new things to emerge and colonize new landmasses. Ultimately, life becomes even more diverse than before.”

Longrich and his collaborators say they believe snakes’ ability to shelter underground and go without food for long periods of time helped them survive the destructive effects of the asteroid impact.

The extinction of their competitors, including dinosaurs and other snakes, allowed the survivors to move into new niches, habitats and continents. Snakes moved into Asia for the first time after this event, according to the scientists.

They evolved into thousands of varieties of snakes. The diversity of today’s species from tree snakes, sea snakes, venomous vipers and cobras to huge constrictors such as boas and pythons, only emerged after the dinosaurs were wiped out, the researchers said.

“It’s remarkable, because not only are they surviving an extinction that [wiped] out so many other animals, but within a few million years, they are innovating, using their habitats in new ways,” said Catherine Klein, the lead author on the paper.

Klein’s team found additional evidence that snakes evolved once again, with greater species diversity, during a global “icehouse” cooling. The Earth formed new polar ice caps at this time, which preceded what we now call an ice age.