The Mexican wolf was considered extinct. Now, there are more than 600, thanks to the commitment of various zoos. 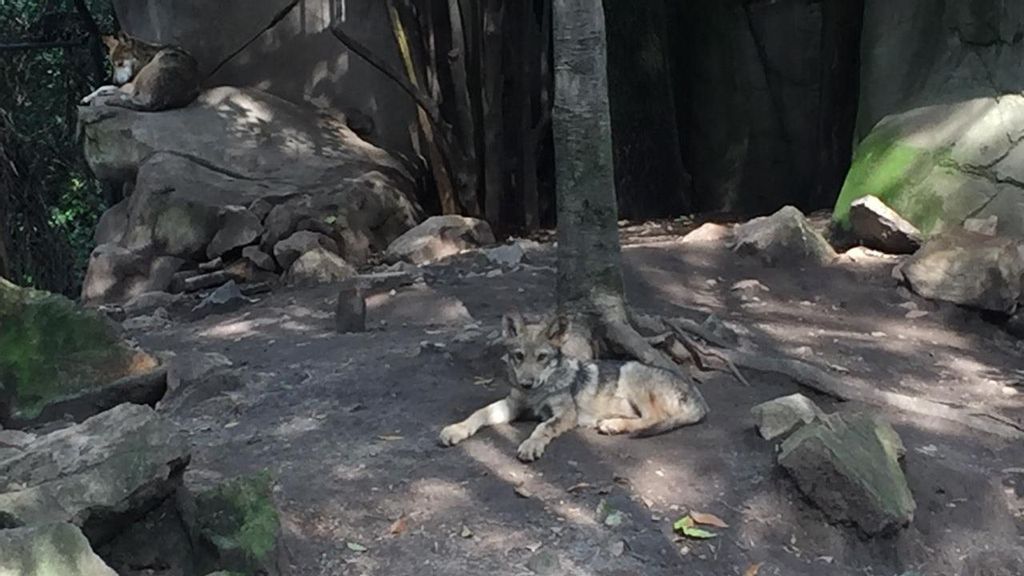 Two Mexican wolves were born in Chapultepec Zoo, in April 2021. Their safety and development are paramount here. (Larsa Barón/Zenger News)

MEXICO CITY, Mexico — Zoos may be controversial in some quarters, but they are instrumental in saving species.

The Mexican wolf was considered extinct in the 1970s. Today, there are more than 600 of them, because zoos kept them from disappearing completely.

Mexico City has three zoos dedicated to such preservation: Chapultepec, San Juan de Aragón and Los Coyotes. They fall under the Ministry of the Environment’s Zoological and Wildlife Conservation Area.

The three house more than 1,800 animals and over 250 species. Fernando Gual Sill, the director of the Chapultepec Zoo, says they play a key role in species protection.

However, some groups, such as Animal Save Movement and World Wildlife Fund, oppose zoos. They argue animals should roam free.

“Many endangered animals have been rescued or reproduced thanks to zoos. If [zoos] were gone, like some activist groups want, a lot of species would be lost,” Gual Sill says.

“Besides the Mexican wolf, we have rescued the California condor, the black-footed ferret, the bison and the axolotl. All these animals were saved thanks to the hard work put in by zoos over many years. Now they are here, safe and protected,” he said.

There are plans to rescue other species.

“Amphibians are at serious risk of extinction all over the world. When water gets polluted, they are the first to feel the effects. We want people to become aware of the importance of these animals, for them to see how we work in the lab, to see screens, to be able to touch them. Make an interactive museum. If you haven’t seen these animals, how are you going to appreciate them?” he said.

To that end, the San Juan Aragón Zoo is building a sanctuary for predatory birds.

The Chapultepec Zoo is going to open an Axolotl Museum and a Conservation Center for Amphibians in December.

Chapultepec Zoo covers 42 acres. Given the pandemic, and in order to protect people and animals, several areas are cordoned off. The zoo is also open to fewer visitors.

The one-day record for Chapultepec, San Juan de Aragón, and Los Coyotes Zoos together is  76,827 visitors, on July 29, 2018. Today, despite the restrictions that allow only 30 percent occupation and limited hours, the zoos are still committed to their mission.

“We like it when people have a special connection with the animals by giving them names. When we have baby animals, we invite the public to name them,” says Gual Sill.

“It’s an unforgettable experience. We want the visitors to discover the animals’ habits, their quirks, how they live, and to identify with them. A child who forms an important bond with some zoo animals will want to study and work with them. And we will have bolstered a life pursuit,” he said.

Cinthya Rodríguez, who frequents Chapultepec Zoo, says that an interest and love for animals develops in childhood.

“I once thought about studying biology because I really liked animals,” she said. “That’s why I’d like someone to explain them to me, especially to kids. If they get [the kids’] attention when they’re little, they’ll be more interested,” she said.

“When I come [to the zoo], I like to see the plaques next to the animal exhibition areas,” said Jonathan Ríos Vargas, who frequents Chapultepec Zoo. “That information is important because it tells us about where they came from, what they eat, their habits and how they live.”

At the same time, some visitors say they would like to have more information about the animals.

“The plaques have very little information. I don’t know what zoos are for, but there is not a lot of outreach. They need to do more things to make them more attractive,” said Cinthya Rodríguez.

The animals in the pandemic

Despite closure to visitors, zoos house living beings, so it must be manned at all times.

“Regardless of the pandemic, we’ve been working normal hours. The animals eat every day and have other needs. We can’t just abandon them,” said Gual Sill.

Since the zoo has had to restrict the number of visitors, it depends on other sources of income.

“With the virtual zoo, the number of visitors increased on our social-media sites. Dr. Marina Robles, Mexico’s Secretary of the Environment, asked us, while the zoo was closed to visitors, to make segments, videos and interesting stories about all the work we do. In fact, we uploaded a virtual tour of the zoos,” said Gual Sill.

“When we opened again in March, we took all the necessary, optimal measures for public spaces. After being closed for a year, there were a lot of new things. Deer, antelope, rabbits, California condors and Mexican wolves all had babies. And at the Aragón Zoo and here, we had baby giraffes,” he said.

Some visitors say the pandemic might have been good for the animals’ well-being.

“I hadn’t been to the zoo in years. Now, it looks better cared for than before. It’s a good thing to have so many areas closed, due to the pandemic,” says Héctor Orta.

“Now, there are fewer animals in one place. Before the pandemic it was fuller and more crowded. They’re fixing it up, and it’s cleaner,” said Ema Laura Rodríguez.

“In zoos, we watch over the animals and protect them from a lot of the threats they face in the wild. We protect them from illness, we vaccinate them, we deworm them, and we feed them a diet that fits their age and needs,” he said.

He says zookeepers are key, since they take care of the animals.

“They clean, disinfect, feed them and tell the vet about any problems. For zoos to function, we have about 120 workers, including zookeepers, vets, pathologists and nutritionists. We also have reproduction specialists and people in the labs,” he said.

“All the jobs are key. We have a lot of older animals. Some of our oldest animals are the spectacled bears, which are 30, the pandas, which are about the same age, and some older birds, as well as an orangutan.”

Gual Sill says these animals would probably have died outside the zoo.

“An older animal in the wild is easy prey for other species and its pack may abandon it. Under our care, they can live up to two to three times longer,” he says. “We’ve been able to get 6-year-old volcano rabbits, old age for them, to reproduce. In fact, we’re the only zoo in the world that has done so.”

The future of zoos

Gual Sill also wants to educate the public on a zoo’s role.

“The worst thing that can happen to a zoo is for people to think its function — rescuing and preserving animals — is not important,” he says. “We don’t know if in the future other species will need this space.”

Now, people who visit the zoos ask for more information about the animals and a place to understand wildlife better.

Translated and edited by Melanie Slone; edited by Fern Siegel