The German triathlete hopes to break a record. Fans call him a “real-life Forrest Gump,” after his favorite movie. 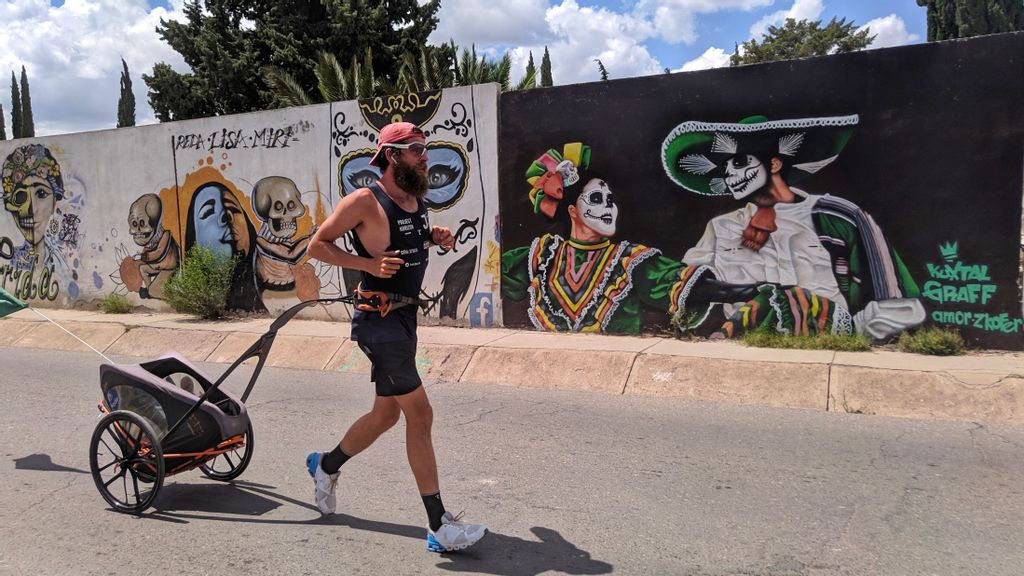 When he was a 20-year-old student, he decided to travel the world, taking off on his first cycling adventure. He later added swimming and triathlon. When he was 29, he rode his bike through Europe and Asia, earning his first Guinness World Record.

Then, he broke the Pan-American world record, traveling 8,000 miles from Alaska to Patagonia, and the world bicycling record from North Cape, Norway, to South Africa.

Today, the 34-year-old athlete has a new goal: to run more than 2,700 miles through Mexico, from Tijuana to Cancún, participating in 120 marathons in 120 days as part of the longest triathlon ever.

“These types of challenges are an inspiration for any athlete, because you take your body to unknown levels. What is most admirable about him is that he has no large team backing him, accompanying him. Most people that take on these types of risky challenges go with a masseuse, a doctor and a nutritionist,” Luis Velarde Rocha, a marathon runner, told Zenger.

Deichmann set off on his adventure in September 2020. First, he swam 310 miles along the coast of Croatia, and then he cycled across Europe, Russia, Japan and Korea.

In the Americas, Mexico was the first country that let him in during the pandemic, so he organized a safe route.

“Safety and the heat are my main concerns, I try to avoid the drug-trafficking zones along the border and the Pacific Coast and the high humidity,” he wrote on his Instagram page.

So far, Deichmann has run through Tijuana, Baja California; Durango, Zacatecas, Jalisco, Guanajuato, Mexico City, Puebla and Oaxaca. He is hoping to reach his goal in the first week of October.

“I run about six or seven hours, then I take a break to eat or to travel to the campground or hotel, so I’m active about eight hours a day,” he told Zenger.

He says when he gets to Cancún, he’ll take a boat to Portugal. From there, he will ride his bike to Munich, Germany, where his trip started.

Even though Deicnmann has visited several countries, he has been wooed by Mexico and its landscapes and cuisine, as well as the people he has met.

“Mexico is simply fantastic; I love its different landscapes, like the desert and the Baja California beaches, the sierra in Durango and Oaxaca. I like the food, but what I like the most are the people — they are very kind and cheerful. In some towns, they greet me with mariachis, or sometimes I have like 20 people running behind me singing ‘Cielito Lindo’,” he said.

The “real-life Forrest Gump,” as he’s now called, said that since ‘Forrest Gump’ was his favorite movie as a child, he always wears a ‘Bubba Gump Shrimp Company’ cap when he runs.

The first one happened in Baja California.

“In Baja California, I was running alone in the middle of the desert, when suddenly a truck showed up and a mariachi band got out and started playing. They wanted to motivate me with a song, and that doesn’t happen in Germany,” he said.

The second story is from Durango.

“When I got to Durango, I went through a town called El Salto. There, a group of runners went with me, and they had a little dog named La Coqueta [sweet and flirty]. When the runners left a few miles later, the dog stayed with me for 80 miles, because she followed me everywhere. But I couldn’t take her with me, so when I got to San Marcos, I asked over the media and television if someone would adopt La Coqueta. A lot of people wrote me, and finally somebody in El Salto adopted her. When she got there, they welcomed her and gave her a medal. She became the most famous dog in the world, because there was a report on her on TV,” he said.

“All over Mexico, people always run behind me, offering me sports drinks, water, etc., but in a little town in Oaxaca, the people running with me put melons, four pounds of mandarin oranges and more gifts in my cart. The cart was so heavy I couldn’t run anymore. Viva, Mexico!” he said.

Deichmann has a message of inspiration for anyone who wants to start running as an athlete, or who simply wants to make dreams come true.

“The most difficult thing is always to start, so most people don’t. But if you start and put all your heart into it, you learn. For example, I’m not a runner; I’m a cyclist. Now, I’m running 120 marathons with discipline and the desire to do so,” he said.

The triathlete hopes to break the record in Mexico so children in Africa who don’t have schools or public transportation can study.

“I work with an NGO [World Bicycle Relief] that gives bikes to children from small towns, so they can go to school. More than $30,000 will be donated to this cause,” he said.

Translated and edited by Melanie Slone; edited by Fern Siegel