Popcorn With Zenger: ‘Copshop’ Is A Crazy Fun Violent Experience 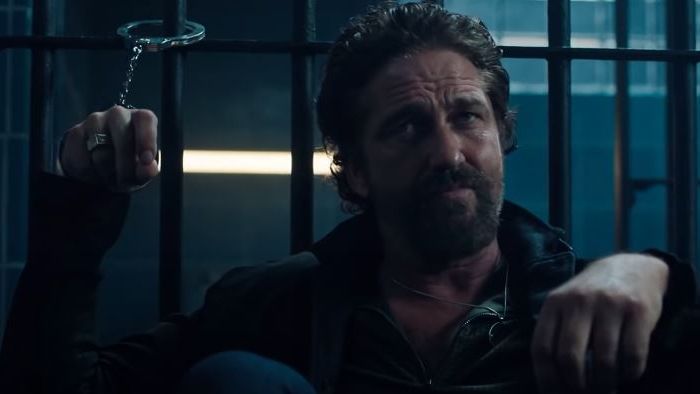 Gerard Butler plays a hitman captured by the police after a failed job in “Copshop.” (Courtesy of Open Road Films)

The current cinematic landscape is calling for more remakes and reboots than the human mind can tolerate. A simple request for modern film studios: if a lack of originality is now mandated, can we at least have films that are inspired by classics instead of being just cheap knockoffs of them?

Open Road Films attempts to be a solution by creating an original film based on 1970s-style action shoot-’em-ups. By original, of course, you would have to omit that Joe Carnahan is the writer and director of this film and most of his movies are styled the same way. In what is usually a page out of Netflix’s book, “Copshop” takes an ensemble cast of notable actors and places a relatively unknown star in the lead role in an attempt to create a new star by proxy.

Actress Alexis Louder, whose most notable credit comes from HBO’s short-lived “Watchmen” reboot, doesn’t have many big-screen roles on her resume. But with action stars Frank Grillo and Gerard Butler by her side, Louder looks to make an impact in an insane story about a marked man in a police station, and how no one is safe until his contract is cashed.

The Story: “Copshop” begins with a normal night for the Creek City PD as rookie officer Valerie Young (Louder) responds to an on-site riot during which she gets sucker-punched by a two-timing hustler named Teddy (Grillo) who is looking to get himself out of some serious trouble.

Thinking that he is safe inside a police headquarters, hitman Bob Viddick (Butler) follows Teddy into prison by faking a DUI hoping to get into his cell and complete his mission. Viddick’s mission to take out Teddy doesn’t go according to plan, which opens the door for a rival assassin to finish the job, causing complete mayhem in the process.

With no backup in sight, dirty cops on the payroll and a determined killer on their heels, a cop, a killer and a con man have no choice but to rely on each other if they plan on surviving until morning.

Bright Spots: Those who are familiar with films such as “Smokin’ Aces,” “The A-Team” and “The Grey” will see a lot of similarities with “Copshop” because they were all directed by Joe Carnahan, who has a knack for colorful characters, uberviolence and over-the-top action.

The secondary characters are completely over the top, but considering the canvas of the film, their performances work. Grillo and Butler are noticeable faces who spend most of their screen time eating up the scenery with dialogue and character building. Grillo, who sports a hilarious man bun, navigates a thin line of gray between hero and villain in a film with very few heroes.

The movie starts getting fun when Toby Huss, who plays Anthony Lamb, enters the film as the psychopathic Southern hitman who kills for fun and has no line he won’t cross. The movie’s tempo changes when Lamb begins to run throughout the film like a one-man army, and the tone shifts to survival in the best way. Lamb is a show stealer, but his performance magnifies the shortcomings of others.

Weak Spots: Louder is pretty solid in the film, but in a cast of colorful characters, her performance is the least gripping. “Copshop” presents Louder as a hard-nosed cop reminiscent of Danny Glover’s Murtaugh in the “Lethal Weapon” movies. But while the script gives Louder lines to sound like she is just as tough as the boys, you never truly believe them. A cop this young wouldn’t normally be this jaded, which makes it hard to buy her performance as believable despite the fact she has a pretty sweet gun… for a rookie.

The premise that a police headquarters — even in a small Nevada town — could be under complete siege for an entire night with no one in the outside world noticing is completely ridiculous. But the film never asks you to take it seriously. As far as the story goes, most of the backstory behind our characters is incomplete. The film doesn’t bother to tie up loose ends because the goal is to explain why they are at the prison, and anything after that won’t be important once the bullets start flying.

The Takeaway: Carnahan’s throwback style makes “Copshop” feel fresh; the action is fun, and the characters are memorable. If Open Road Films delivers a sequel — which the film teases — it will be a welcome high-octane ride.

See or Skip: “Copshop” is a relentlessly entertaining shoot-’em-up film with B-movie style and charisma.