Demonstrations against President Jair Bolsonaro had a low turnout throughout Brazil, despite various government scandals. 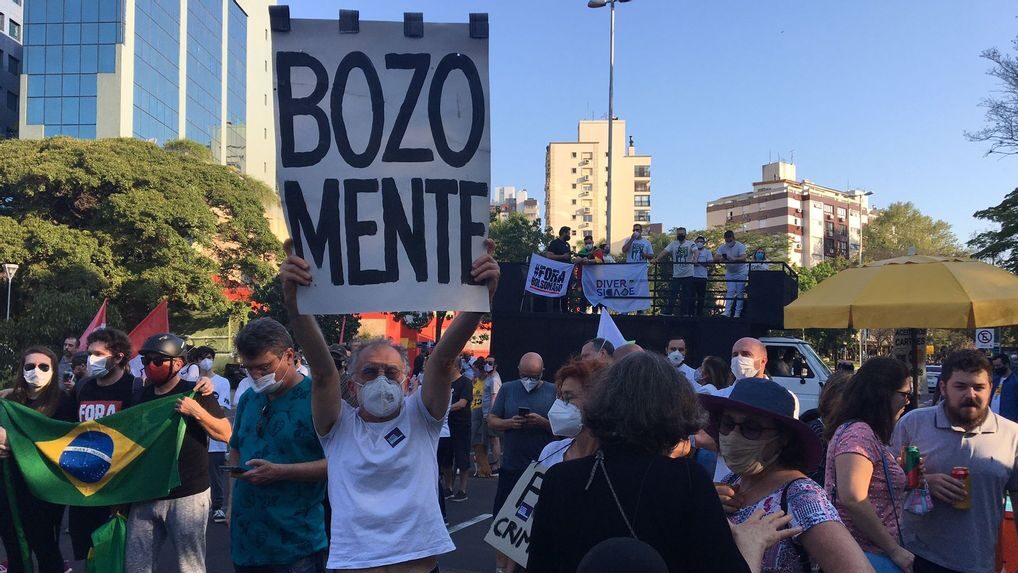 A protester with a sign claiming that Brazilian President Bolsonaro is lying. (Luciano Nagel/Zenger)

But the protests had a low turnout, compared to the Sept. 7 demonstrations supporting the president. In many cities, the call for protests included the slogan “Neither Lula nor Bolsonaro.” The motto discouraged people involved in social movements connected to former president Luiz Inácio Lula da Silva and the Workers Party (PT), which brought him to power.

Paulo Peres, political scientist and professor at the Federal University of Rio Grande do Sul, told Zenger that Sunday’s acts spread over more than 15 Brazilian capitals — but do not have enough force to achieve Bolsonaro’s removal.

“Not for now. We are still far from that, despite the serious economic crisis and the scandals involving the government — especially those connected to the pandemic that the Parliamentary Inquiry Commission revealed,” said Peres. He alluded to the ongoing investigation on alleged irregularities in contracts, fraud in bids, embezzlement of public resources and other illegal activities related to the pandemic response.

The demonstrations took place in the afternoon and had the support of politicians and union leaders who pushed for Bolsonaro’s removal and demanded more COVID-19 vaccines. Many wore white T-shirts as a peace request. Unlike Bolsonaro supporters, most wore face masks to prevent the spread of COVID-19.

Rio de Janeiro, Salvador, Belo Horizonte, São Luís, Vitória and Manaus’ protests in the morning were nearly empty. The same was true for demonstrations in Porto Alegre, Rio Grande do Sul’s capital, despite the attendance of Governor Eduardo Leite, who became the target of strong homophobic criticism from the president after he came out as gay.

A member of the Ciudadanía party, Luiz Jacomini was among Porto Alegre’s protest organizers. The demonstration occurred in Parcão, a neighborhood that served as the meeting place for Bolsonaro supporters, on Sept. 7. Jacomini believes the participation of opposition parties is key if they want Bolsonaro to leave power.

“I understand the PT and the Socialism and Freedom Party’s choice of not joining today’s demonstrations [because they were opposing Lula]. But its effect is evident in the impeachment movement’s low support. Now, we run a greater risk, that Bolsonaro remains in office. We are under threat of an institutional breakdown,” said Jacomini.

Among the hundreds of protesters who demanded Bolsonaro’s immediate impeachment was state deputy Juliana Brizola, from the PDT. Accompanied by her advisers and some party members, the deputy said most Brazilians do not want to continue living in such a polarized country.

“This polarization has brought us here, to this demonstration. … Gasoline costs $4.80 per gallon, people are losing their jobs or dying of COVID-19, and there is still a vaccine shortage,” she said.

“I am a member of the PDT. I have a thousand disagreements with the MBL’s idea of the state. But I come here to protest because there is an issue where we both converge, and which is more important: the removal of the man who happens to be the president. We regret that the PT and other parties are not here with us, which in my opinion leads to increasing disagreement and polarization,” said Brizola.

“Despite the serious health crisis, Bolsonaro still has around 20 to 25 percent of the popular support. Most importantly, he has the support of congressmen whose votes would prevent the approval of an impeachment [process]. In addition, the president of the Chamber of Deputies remains firm in supporting the government. He could accept any request for impeachment and move the process forward,” Peres said.

The Chamber of Deputies president Arthur Lira has received more than 123 requests to impeach Bolsonaro. That should lead to an investigation into Bolsonaro’s crimes and irregularities. But Lira has not followed through and keeps the requests on file. There is among them a “super request” of parties and movements denouncing the government for 23 crimes of responsibility, including prevarication in the Covaxin vaccine scandal.

“We already had a military dictatorship. Now we have a military democracy. From what I understand, the plan is that Bolsonaro leaves power without an impeachment process because he already has no electoral chance against the PT in 2022. How to do this is the question at stake now,” Peres said.

Translated and edited by Gabriela Olmos. Edited by Melanie Slone and Fern Siegel.