Lawmakers must negotiate a compromise in the limited time they have remaining. 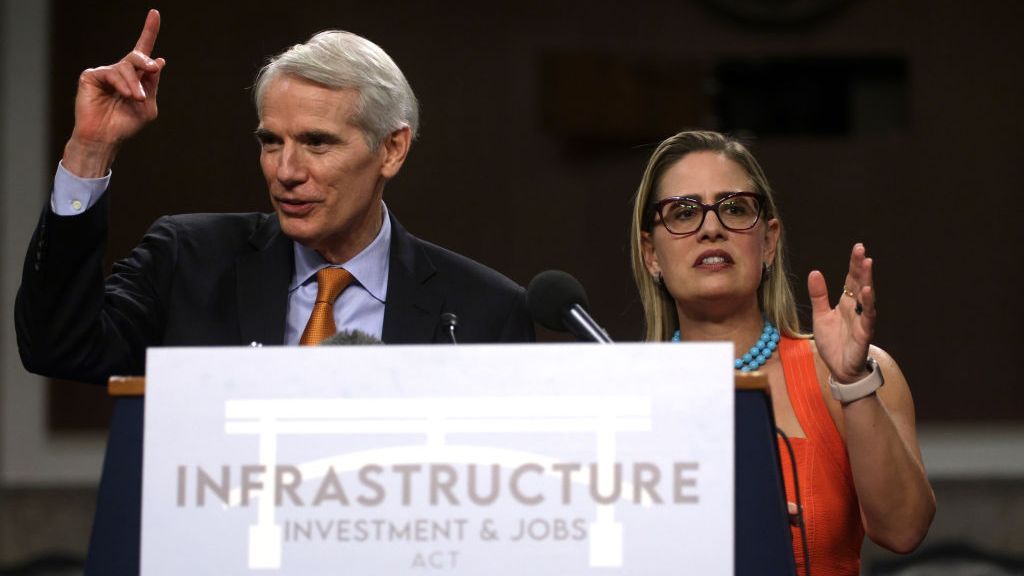 Sen. Rob Portman (R-Ohio) and Sen. Kyrsten Sinema (D-Ariz) answer questions during a news conference following a Senate vote on the bipartisan infrastructure framework on July 28. Democrats are working on a budget reconciliation to pass the bill with a simple majority vote in the Senate. (Alex Wong/Getty Images)

A stalemate among congressional Democrats is jeopardizing their chances of passing a $3.5 trillion budget reconciliation bill — and could throw a wrench in House plans to take up the Senate-passed $1.2 trillion infrastructure plan if left unresolved.

With committees on a leadership-imposed deadline to complete their portions of the reconciliation bill this week and the House set to vote on the bill by Sept. 27, Democrats have struggled to find consensus. Reaching a compromise before the deadline could prove difficult as progressive lawmakers squabble with moderates over the hefty budget resolution price tag.

“They don’t have a lot of time, and once they get into next year, that’s when it would be much more difficult to enact legislation because of the election year,” Peter Bergerson, a political science professor at Florida Gulf Coast University, told Zenger.

Despite their slim majority in the Senate (including two Independents who caucus with them), Democrats face the challenge of finding unity on the reconciliation bill, which is not expected to garner any Republican votes. Democrats are aiming for the budget reconciliation, which could be passed with a simple majority vote in the Senate.

While both chambers have passed a budget framework for $3.5 trillion over the next decade, some moderate Democrats, including Sens. Joe Manchin (D-W.V.) and Kyrsten Sinema (D-Ariz.), have said they want to see that number come down in the final bill. Their progressive colleagues do not agree.

During appearances on Sunday morning TV shows, Manchin indicated $1.5 trillion would be the highest amount he could support for the spending plan. He also questioned the deadlines set by Senate Majority Leader Chuck Schumer (D-N.Y.) and House Speaker Nancy P. Pelosi (D-Calif.).

“[Schumer] will not have my vote on $3.5 [trillion], and Chuck knows that, and we’ve talked about this,” Manchin said on CNN’s “State of the Union.”

“We’ve already put out $5.4 trillion, and we’ve tried to help Americans in every way we possibly can, and a lot of the help that we’ve put out there is still there, and it’s going to run clear until next year, 2022. What’s the urgency?”

Manchin’s line in the sand may prompt progressive Democrats to respond with an ultimatum of their own — potentially derailing both the reconciliation bill and the infrastructure bill, which gained bipartisan support during the Senate vote.

Rep. Jamaal Bowman (D-N.Y.) has said he could not rule out voting against the infrastructure bill if Manchin’s demands on the lower cost for the resolution are met.  The higher-priced bill aims to expand the social safety net and includes several items on President Joseph R. Biden Jr.’s “Build Back Better” agenda.

“We’ll see when we get there,” Brown told MSNBC on Monday. “But we still have several weeks — weeks of negotiation to make sure we are all on the same page before it’s time to vote.”

Other House progressives have conditioned their votes for the infrastructure bill on the reconciliation bill passing the Senate. That would require Manchin’s support; Democrats cannot afford to lose any party members’ votes in the Senate.

Similarly, just a few Democrat defectors could block the reconciliation bill in the House.

“We have the bookends now,” Bergerson said. “What Manchin wants is the bottom, $1.5 trillion. And then we have what other Democrats and President Biden want, $3.5 trillion. The compromise is going to be in between someplace.

“And they’re going to have to fine tune it and have certain things that will kind of sweeten the pie for Manchin, as well as some of the other Democrats. There may also be some individual pieces that will be added that will close the deal.”

Changing how the bill is financed could be one way to sway the moderates.

The House Ways and Means Committee released a funding plan on Monday that proposes a number of tax increases. Key among them:  raising the corporate tax rate to 26.5 percent, adding a surtax of 3 percent on top earners and bumping the basic capital gains tax to 25 percent. The plan would raise more than $2 trillion in revenue over 10 years, according to the committee, and pay for more than half of the spending agenda.

“The House made good on its promise to offset most or all of the cost of the investments with sound revenue raisers and health savings. This should end vague debates about the ‘size’ of the package and focus discussion on the specific policies included in this groundbreaking legislation,” stated Chuck Marr, senior director of federal tax policy at the Center for Budget and Policy Priorities, and Samantha Jacoby, a senior tax legal analyst at the center.

The proposed tax increases could appeal to Manchin, who has said he favors raising taxes on corporations as a way to pay for the reconciliation plan.

But with the approach of the 2022 midterm elections, the final price tag could drop as Democrats vie to retain their power in Congress.

“As for the size of the final spending bill, it might be a little smaller than $3.5 trillion, but not by much,” Eileen Appelbaum, co-director of the Center for Economic and Policy Research, told Zenger. “Advocates for people and families and their representatives in Congress have formed a broad coalition and vowed to fight for the entire package of spending priorities. It will not be acceptable to them to have some spending priorities cut.”

While Democrats are at an impasse on the reconciliation bill, the House Ways and Means Committee’s funding proposal provides a glimmer of hope as negotiations among lawmakers and the Biden administration move forward.

Sinema on Wednesday morning was set to meet with Biden to discuss the reconciliation bill, and Manchin was scheduled to meet the president later in the day.

“They’re moving slowly, but they’re moving toward a compromise,” Bergerson said. “It appears that there’s some light at the end of the tunnel.”