Police dogs Socks and Bryn are fine after the incident. 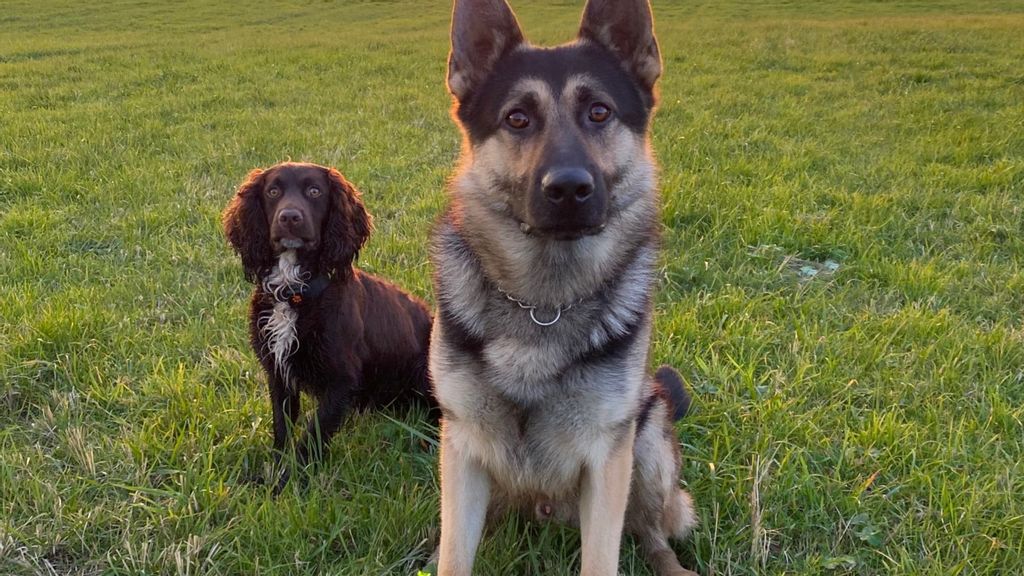 Northamptonshire, England, police dogs Bryn and Socks are OK after a run-in with a car thief. (Northants Police/Zenger)

K-9 Socks was shaken but eventually recovered after a car thief rammed a police vehicle in which he was sitting.

Police bodycam video of the incident on Feb. 26 in Northamptonshire, in the East Midlands of England, was released on Sept. 14.

The suspect, Alexander James Lundy, stole an Audi from a driveway in Cold Ashby and ran over the owner’s foot in the process, according to police.

Police officers found the Audi abandoned a short time later. As one policeman was making inquiries about whether anyone had seen the suspect, Lundy drove at him in another car, police stated.

“Lundy was tracked to Rothwell, where he was blocked into a driveway by quick-thinking Police Constable Lucy Sculthorpe, one of the force’s dog handlers,” the police stated. “She told him to stay where he was and got one of her two police dogs, Bryn, out of her car. However, Lundy proceeded to ram her vehicle, nearly squashing her and Bryn against a stone wall in the process.”

Sculthorpe said she checked Bryn for injuries “and saw that he thankfully, appeared to be OK.” She then checked police dog Socks, who was still in the police vehicle when it was being rammed.

“Socks is normally a very friendly, lively, sociable little dog who loves people,” she said. “When I first got him out of the van after this incident, he seemed a little shaken. He would normally look at me straight away for his ball, but he just wandered around on the grass for a few minutes and when a male nearby spoke to me, he moved away from him, whereas, he would normally go over to someone and look for attention.

“I reassured him and put him back in the van to settle,” Sculthorpe said. She then sourced another van to carry both dogs, so hers could be recovered.

“The following day when I put Bryn and Socks in the van to go for a walk, I noticed Socks was much more unsettled than he usually is,” she said.

“I believe the incident unsettled him and made him temporarily more nervous of being in the van. This took a couple of days to resolve, and I made several short test journeys with him to reassure him that he would be OK.”

Lundy was later arrested after crashing a car he was driving into a tree in Rothwell and leading police on a chase by foot. He admitted to numerous offenses and was sent to jail for three years, police said.

“Thankfully, with [Sculthorpe’s] help, police dog Socks has made a full recovery following the incident and is back to his lively, happy self with numerous successful incidents attended since,” police stated.

«Previous Post
VIDEO: Grin And Share It: Scientists Show How They Gave A 70,000-Year-Old Neanderthal His Smile»Next Post
The Music And Genius Of Fela Kuti: Remembering Nigeria’s Afro Beat Maverick 24 Years On