More than 200 years after its creation, the dish continues to delight the palate of locals and visitors. 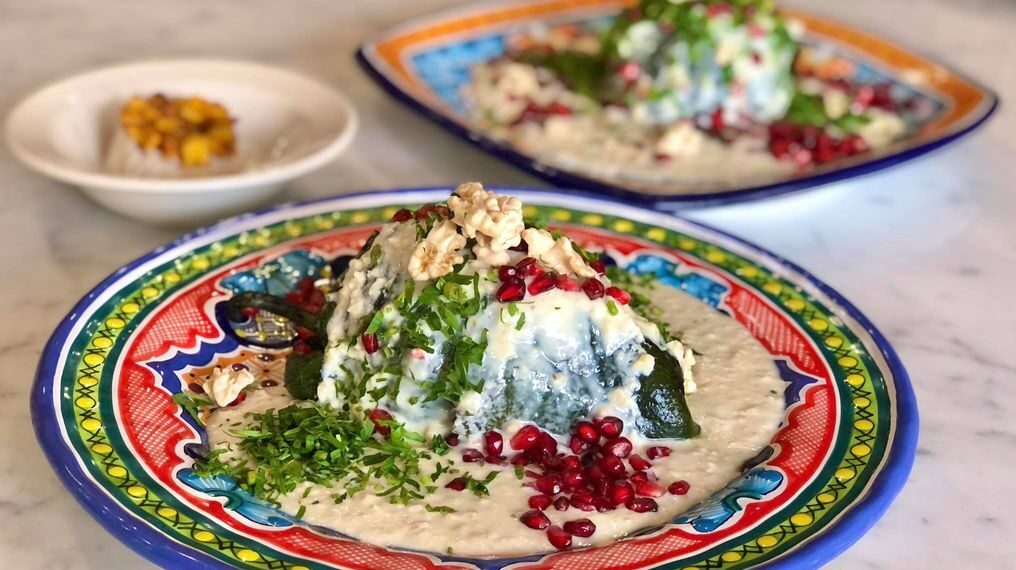 The dish has the colors of the Mexican flag: green, for the peppers and parsley; white for the nogada; and red for the pomegranate seeds sprinkled on top. (Julio Guzmán/Zenger)

The dish is one of the most elaborate and representative of Mexican cuisine. A plate of chiles en nogada displays the colors of the Mexican flag. It has a flavor combination tested throughout history, mixing culture and culinary art.

“Sweet, salty and crunchy flavors explode in the dish, due to the nut and spices,” said chef Marión Díaz Ordoñez, from Mexico City’s Bistrot Marión restaurant.

Many Mexicans prepare chiles en nogada in September, which is when most of its ingredients are fresh. The season coincides with the date of Mexico’s independence celebration, on Sept. 15. For many Mexicans, chiles en nogada’s taste brings back countless family memories.

“I first tried chiles en nogada with my parents and my cousins when I was 10. The colors caught my attention. I liked its ingredient combination, especially the mix of nuts with pomegranate seeds and pepper. It was a pleasant tasting experience because the dish joins soft and mildly strong flavors,” diner Karla Gaenza told Zenger.

The original recipe calls for a poblano pepper previously ‘tatemado’ (roasted over the fire) and skinned. Cooks usually stuff it with a stew of finely chopped beef, fried with minced apple, pear, peach and almond. The stew has raisins, onion, bell pepper, and tomato, too. Some dip the pepper in a batter of beaten egg and fry it. Then, they serve it on the plate, add the nogada — a creamy sauce made with cheese, walnut, milk, sugar and cinnamon — and garnish with pomegranate and parsley.

Legend has it that the Augustinian nuns of the Santa Mónica convent, in the state of Puebla, learned that Agustín de Iturbide — one of the leaders of Mexico’s independence movement — would be celebrating his birthday, on Sept. 27, 1821, in their town. To please him, the nuns combined all the seasonal ingredients and prepared a special dish that would include the colors of the Mexican flag — green for poblanos and parsley; white for the nogada (walnut cream); and red for pomegranate seeds.

At the time the nuns created the dish, Iturbide had adopted a flag with those colors. The current Mexican flag is still green, white and red, but has a different coat of arms.

The nun story is a well-known legend, but the dish may have an older origin, said Gerardo Navarro, an archaeologist at Mexico’s National Institute of Anthropology and History and the Teteles de Santo Nombre archaeological site and zone museum’s director.

“Historical records, especially cookbooks, that go as far back as the 17th century, include an older recipe for chiles en nogada. It [the cookbook] belonged to a family from Puebla, the Trasholeros. Agustín de Iturbide probably ate or was given chiles en nogada, but it doesn’t necessarily explain the dish was created specifically for him,” he told Zenger.

Although chiles en nogada’s origin may not be entirely clear, what is certain is that it mixed pre-Hispanic peppers with meat, milk, eggs, nuts and fruits, originally from Europe, and pomegranate, which came from Asia. The ingredient fusion speaks of the country’s history.

“We Mexicans are also heirs to that influence,” Navarro said.

“In old cookbooks from the 17th or 18th century, chiles en nogada was considered a dessert. This [tradition] comes from the Spanish cuisine, especially the Andalusian, from southern Spain, which has an Arab influence. There, it is customary to fill peppers with strawberry and serve them as a dessert. Chiles en nogada is a clear example of [how food is a] cultural mix, where a Mexican recipe may call for [elements of the] indigenous, Spanish, Arab and French traditions,” said Navarro.

When preparing chiles en nogada, cooks honor a legacy of hundreds of years of tradition and secrets. The smallest detail in the recipe can change its taste and spoil it in more severe cases. But chefs work hard to be true to the legacy and satisfy the most demanding palates.

For chef Luis Ángel Muñoz, who works in a restaurant in the German region of Rhineland-Palatinate, which borders France and Luxembourg, the responsibility of introducing chiles en nogada to foreigners has been a great challenge.

“Many ingredients [in the recipe] are unknown [in the region], or those who know about them may use them in different dishes. Here in Germany, people eat a lot of pepper, but in France or Luxembourg, they don’t. I introduce chiles en nogada as a traditional Mexican dish, and when possible, I tell some of its history. That’s when people reconsider their idea that Mexican cuisine is only tacos or enchiladas,” he told Zenger.

Muñoz usually adds pine nuts to the recipe, which should be fresh, since they provide a particular flavor. He tries to clean the walnut thoroughly for the nogada because if it is not well peeled, it may make the dish bitter or oxidize the nogada’s color.

Muñoz also chops the almonds evenly with the fruits and makes sure the pepper does not have any burnt skin residue. He knows that careful prep will pay off.

“Listening to unexpected [comments of diners] brings me satisfaction, happiness, joy and more. Some people may not have liked the dish or liked nogada more than filling, but personally, I am happy to know that customers leave with a new knowledge of Mexican gastronomy and a bit of history,” he said.

In addition to making the traditional recipe for chiles en nogada, chef Marión Díaz Ordoñez has experimented with new versions of the dish. She prepares a specialty of pepper stuffed with duck and nogada made from walnuts and macadamia nuts, which could be considered a fusion with French cuisine. Chef Díaz Ordóñez suggests accompanying the dish with rosé wine.

“People await them. They sell very well. For me, they are the best. I also prepare vegan and vegetarian peppers for those who don’t eat meat. … There is a basic recipe for chiles en nogada, but each cook’s interpretation makes a particular pepper unique,” she told Zenger.

Brenda Canto usually cooks the dish and participates in the chiles en nogada festival in Calpan, Puebla. Known for harvesting most of the recipe’s ingredients, Canto asks customers to value the dish and pay what it is worth.

“People here in Mexico may be looking for a large pepper at a low cost. I believe they [customers] need to value the work behind each chile en nogada. It is not like making soup. There is an artisan process behind every ingredient,” she told Zenger.

Tihui Campos, the director of the federal government’s food culture program, at the Secretary of Culture, recommends respecting the period in which most ingredients have their best flavor.

“We have to find a way for young people to identify with chiles en nogada’s production and consumption. Let’s invite people to enjoy the dish, demand it during the season — to avoid altering the cycles of nature —and continue with the tradition,” said Campos.

“May eating [chiles en nogada] continues to be a celebration of Mexican cuisine.”