Combate Global And Univision Have Been A Winning Combination 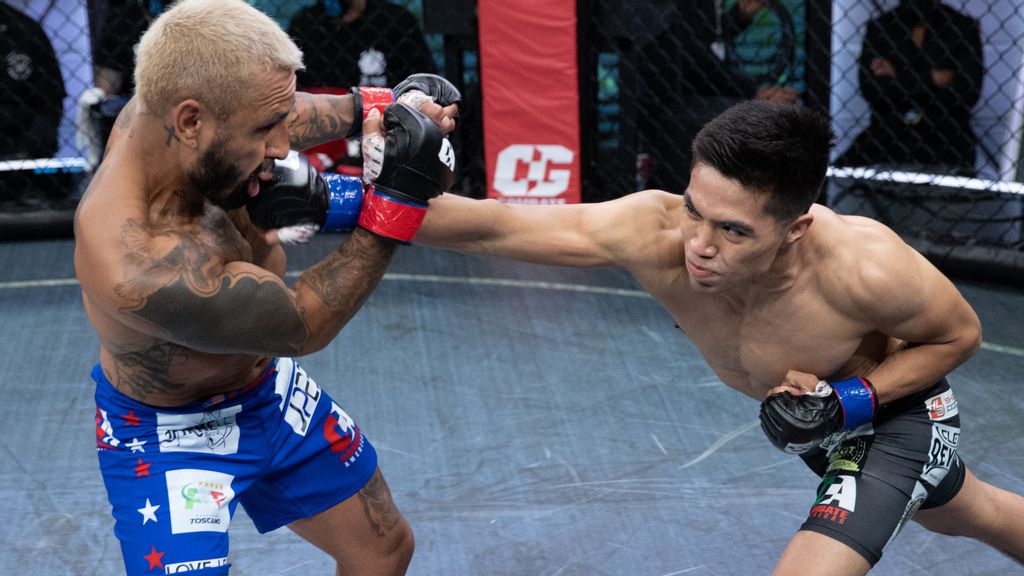 David “The Black Spartan” Martinez (right) and Francisco Rivera Jr. during their fight on May 30, 2021. Martinez won via KO in the second round to take a Combate Global eight-man bantamweight tournament in Miami. (Combate Global)

A unique partnership between a mixed martial arts company and Univision, a leading Spanish-language television network, is making a strong showing in the Nielsen viewer ratings.

Combate Global, an MMA property that features primarily young Hispanic fighters, aligned with Univision in July, with the network acquiring what has been described as a “significant” equity stake in the company. Combate fights appear regularly in a late-night time slot on Univision and have quickly become the No. 1 Spanish-language program on late-night television, according to Nielsen data. Combate is also seen on Paramount+, which owns the English-language rights.

An estimated 350,000 viewers watched the first show on Univision  on April 9, airing in a 12:30 a.m. time slot. On Aug. 1, the Combate fight night attracted 946,000, edging a show on rival UFC the previous night, in the Nielsen ratings. It was the first time another MMA show had higher ratings over the same weekend an Ultimate Fighting Championship event was on ESPN.

“I sometimes don’t believe our numbers when they send them to me,” said Campbell McLaren, who founded Combate Americas 10 years ago and renamed it Combate Global earlier this year. “In four months, we’ve tripled the audience from where we started. It’s pretty spectacular.”

The most recent telecast, on Sept. 10, drew national interest with Alana McLaughlin becoming the first transgender woman to compete in a professional MMA bout since Fallon Fox in 2012. McLaughlin, 38, won her pro debut, beating Celine Provost by submission in the second round.

It’s the kind of forward thinking that McLaren — a co-founder of the UFC — has used to turn Combate into a unique attraction. Events such as “The Last Latina Standing,” an eight-woman tournament held in August, have drawn solid ratings.

“We’ve created the first new audience for MMA since the inception of the UFC,” McLaren said. “It’s passionate; it’s fun; it’s entertaining, and it’s a different group of faces than what you’re seeing on other TV sports.”

Univision is happy with the early returns as well. When Univision, which prides itself as being the home of soccer, sought to add another sport to its programming, it viewed Combate Global and its stable of young Hispanic fighters as a natural fit. McLaren built Combate with Hispanic fighters from the U.S., Mexico, Chile, Colombia, Ecuador, El Salvador, Venezuela, Puerto Rico, France and Spain, among other countries. Many of the fighters have only a few bouts.

“We’re very happy with the results so far, and we’re just starting,” said Olek Loewenstein, Univision’s president of sports content. “It’s a great opportunity and a bet that we took that already is paying off for us.”

Univision began buying the rights to Combate fights nearly four years ago, but “it wasn’t family,” McLaren said. The relationship went to another level with the signing of a five-year rights deal and Univision acquiring an equity stake.

Combat sports have become a valuable property with the emergence of streaming video. Endeavor-owned UFC, the market leader, is a key component of Disney’s ESPN Plus, and Univision hopes Combate can enhance its future streaming services.

“We wanted to partner with an MMA company and do something bigger than a straight media deal,” Loewenstein told Zenger. “Media networks throughout the years — and especially with larger properties — have had this relationship where we are the rights holder and the sport is the rights owner and there’s a great relationship for a certain period of time. The moment the rights deal is done, all that vanishes. The audience follows the sport, and everybody goes their own way if the deal is not renewed.”

Owning an equity stake in the company not only gives Univision added incentive to build the Combate brand but assures the network it will benefit should another network ultimately pay a sizable amount for the rights fee.

“I want to be part of the growth of the property and reap the benefits when it’s established,” Loewenstein said. “If there’s a third party that wants to buy the rights for Combate for an absurd amount of money, I will make money if I’m an equity partner even if I don’t have the property on air.”

McLaren, a television producer, is accustomed to creating MMA success stories. He was an original founder of the UFC, producing UFC 1 through 12. He says Combate succeeds because it doesn’t compete for the same fighters or audience that UFC attracts.

“I realized the potential for an audience that’s very different from the UFC’s audience,” McLaren said. “That’s what we’ve built with Univision’s help. The average age of our audience is 27 and 60 percent female at times.  We’ve had an all-woman tournament and an all-woman card. We’re younger, more female, and multi-cultural, and it’s on a Spanish network. It’s a new approach that’s visually different.”

Univision’s commitment is evident with the construction of a state-of-the-art studio for staging events with no crowd in attendance. Built during the onset of COVID-19 and located in Miami, the studio stages not only televised MMA bouts but also a wide assortment of multi-cultural content.

“We decided to create a unifying experience for the television audience with a unique studio,” Loewenstein said. “For us, it has become a great asset. It not only allows us to do the fights, but we do interviews the day before for social media and other ancillary content. We’re seeing how we can expand the use of the studio for other things.”

McLaren has scouts searching Mexico, France, the Dominican Republic and Spain for young male and female fighters trying to break into MMA. Being able to offer them a chance to appear on Univision is an added incentive.

“I’m finding folks that are very young, and we’re putting them on a network they all know,” McLaren said. “Their families can throw a party and watch. We give people who don’t have a lot of opportunities an opportunity. It’s a chance to be on TV, be in the limelight, develop a career and make some money.”

Combate has a special event scheduled for midnight ET on Nov. 12, when it will stage a one-night, eight-man, single-elimination tournament pitting fighters from the United States against Mexico. American fighters will be on one side of the bracket and Mexican fighters will be on the other. The winners of the two brackets meet in the finals. It’s similar to the winner-take-all tournaments that UFC featured in its early years when fighters needed to win three bouts on one night. It follows a USA vs. Mexico soccer match on Univision.

Considering how successful the partnership has already been, McLaren sees nothing but good things ahead for Combate Global and Univision.