Judith Heumann and other activists say more is needed to ensure equality. 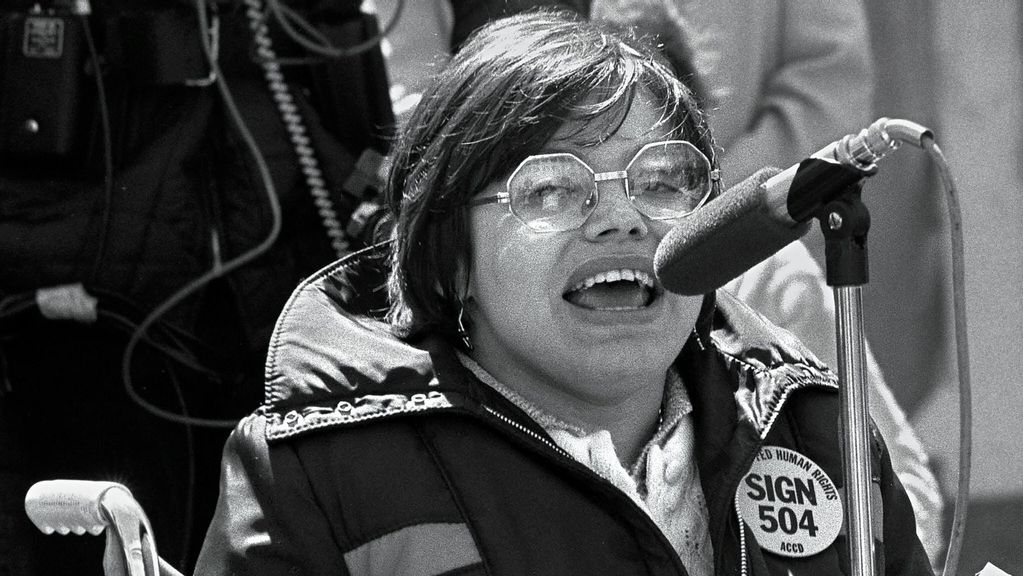 Judith Heumann at the 504 Sit-in at HEW's San Francisco office in 1977, which she helped lead, lasted nearly a month. It led to the signing into law of Section 504 of the Rehabilitation Act, the first U.S. federal civil rights protection for people with disabilities. (Courtesy of Judith Heumann)

Judith Heumann, an international leader in the movement for disability rights, remains at the forefront after nearly 50 years.

She was featured in the Oscar-nominated 2020 documentary “Crip Camp,” about Camp Jened for disabled children in upstate New York. It was a key incubator in the early 1970s for what became the disabled-rights movement.

All document her fight for visibility, equal opportunities and independent living since being stricken with polio as an 18-month-old in 1949. When 9-year-old Heumann came to Camp Jened in the summer of 1957, it was the first public place she felt included and “seen.” Since then, she focused on ensuring disabled people are included as full-fledged members of society, not objects of pity.

Some 26 percent of adult Americans — roughly 61 million people — have some sort of disability, whether it’s limited mobility, deafness, blindness, autism, a neurological disorder or something else, according to the Centers for Disease Control and Prevention.

Heumann fought alongside disabled activists and non-disabled allies. It’s widely acknowledged that her natural leadership qualities and ability to inspire have played a large part in the disability-rights movement since its inception.

During President Richard Nixon’s administration, Section 504 of the Rehabilitation Act, the first U.S. federal civil-rights protection for people with disabilities, became law in 1973.

Secretary of Health, Education and Welfare Joseph Califano, who served under President Jimmy Carter, balked at enforcing 504’s provisions, sparking a well-documented demonstration in 1977. The 504 Sit-in at HEW’s San Francisco office, which Heumann helped lead, lasted nearly a month. Near its end, Califano signed the 504 Act.

Another major advancement — the Americans with Disabilities Act (ADA) — was signed into law by President George H.W. Bush in 1990. The ADA prohibits discrimination against people with disabilities in several areas.

President Bill Clinton signed into law the  Ticket to Work and Work Incentives Improvement Act of 1999, which provides Social Security Disability Insurance and Supplemental Security Income to disability beneficiaries with a “ticket” to obtain vocational rehabilitation services, employment services and other support services from an employment network of their choice.

President Barack Obama signed the Every Student Succeeds Act in 2015 to assist teachers in supporting students with disabilities. He also signed the Workforce Innovation and Opportunity Act in 2014 to provide more employment opportunities for people with significant disabilities. Obama issued Executive Order 13548 in 2010, “to establish the federal government as a model employer of individuals with disabilities.”

“It’s fair to say discrimination against disabled people cuts across all communities,” Heumann said in a telephone interview. “There are no illusions that one political party or the other completely gets it. The reality is Democrats understand many of the major issues that we deal with, and are learning and are willing to learn, as opposed to… I’ve become more and more disillusioned by what’s been going on in the Republican Party.”

Amid the controversy generated by Republican-governed states like Texas and Georgia, which passed legislation aimed at what Democrats see as voter suppression, one sizable interest group has remained under the radar: the disabled.

National Disability Voter Registration Week, from Sept. 13-20, is a project of the REV UP campaign (Register, Educate, Vote, Use Your Power), an initiative of the American Association of People with Disabilities (AAPD). Heumann is a board member. The campaign is about access, not only to voting but also to influencing policy.

Voting by mail, early voting and curbside voting are essential tools for enfranchising the disabled. A study published recently by the Program for Disability Research at Rutgers University and the U.S. Election Assistance Commission found that more than 53 percent of the 35 million eligible voters with disabilities voted by mail in 2020, compared with 42 percent of the non-disabled.

“We are working toward removing barriers in the voter registration and voting process itself, as well as working to get elected officials, those running for office and those managing elections, to recognize the disability community as a powerful voting bloc,” said AAPD President and CEO Maria Town.

“This year in particular, our messaging focuses on the ways our votes connect directly to our day-to-day lives. Our efforts … are really focused on making sure people understand their vote is more than something that happens at an election — it shapes the policies and programs that impact your lives.”

Although Town supports the For the People Act, introduced in Congress this year and backed by the Biden administration, she has issues with one part of it: a paper ballot mandate.

“Paper ballots are inherently inaccessible to folks who are blind or low vision, (and) to people, like myself, who have disabilities like cerebral palsy, so our signatures change every time we sign them, and to people with learning disabilities who may struggle to read standard print,” Town said.

Instead, AAPD advocates more research into secure electronic voting. Despite a wide perception that online voting is susceptible to hacking, people do banking, file taxes and look up their medical records online. This leads many to ask why this doesn’t extend to voting.

“Last year, we celebrated when an astronaut was able to vote from space,” Town said. “We allow our military and uniformed service members to vote remotely … and we want to make sure that people with disabilities have the rights to use similar systems. I’m from Louisiana, and I’m very aware that even elections with fully paper ballots can be hacked.”

Another disability activist, Bob Kafka, a longtime organizer with the grassroots group ADAPT based in Austin, Texas, said: “The metaphor I use about the disability vote is: ‘We’re not a fondue, we’re a tossed salad. Our community is very diverse. Voting might be seen as the salad dressing that pulls us together because we want to put in place policymakers sensitive to disability in general: ADA, education laws, fair access in housing.

“We join with other groups to try to get federal legislation, but then if that doesn’t work, or even if it does, we still have the necessity to go state by state, bringing out the disability vote.”

Texas Gov. Greg Abbott has used a wheelchair to get around since he was paralyzed in an accident in 1984, but many do not see him as an ally of the disability community.

“One of the things that is very strange,” said Kafka, is “if the governor was… gay or lesbian, a person of color, Latino, and [if his] community would be against that person, that would be a news story. But the general media, I believe, is afraid to touch his disability. They don’t know how to handle it, so he gets a pass. We in the [disability] community recognize and would hope he would have some sensitivity, but he is totally oblivious, whether it’s ADA, healthcare, voting, you name it — his position is contrary to almost any disability group at the state level.

“He doesn’t want federal control telling the state of Texas what to do. But he basically overrides local and city mandates, whether [for] masks, vaccination, [and] more than that. He’s totally a hypocrite.”

The governor’s website states: “The Governor’s Committee promotes compliance with and facilitates implementation of the ADA, Texas Accessibility Standards and other state and federal disability rights laws.”

“Folks want to restrict the rights of black and brown people, and disabled people and women to vote, particularly,” said Town. “I want to be clear, too, it’s not just southern states. States like Arizona, Iowa, Wisconsin are all dealing with these extreme voter suppression laws. The way we fight back in the short term, for the bills that haven’t passed, is calling your elected officials or contacting them in whatever way works for you. Your voting rights are sacred and need to be protected and not shut down.”

Abbott signed the state’s new voting bill into law on Sept. 7. The bill, widely reported as being more restrictive, is being challenged  in lawsuits filed by civil rights groups.

The U.S. Supreme Court in July voted 6-3 to uphold Arizona’s voting law, which restricts early ballot collection by third parties and another allows for tossing ballots cast in person at the wrong precinct, among other things.

Major changes over the years

There have been huge changes in the 31 years since the ADA was signed into law, and disability rights are now generally recognized as essential civil rights. But much more needs to be done, activists say.

“The ways that we vote are changing,” said Town. “People should have as many options and ways of voting as possible, and every one of those options needs to be accessible. We have been talking with and working with the Biden administration to make sure they understand what the disability community’s priorities are when it comes to voting. We are in alignment on many things.

“Even though things are more accessible, there are still disabled people who are put away in either institutions or even in their own homes and just thought of as out of sight, out of mind,” she said. “Even though we have things like the ADA that establishes all these standards for accessibility, we haven’t dedicated the cultural or social will to actually make our society inclusive and accessible in every aspect of life.

“And even though the ADA exists, systems like Medicaid, which so many people with disabilities rely on, still haven’t been adequately funded so that people with disabilities can access all the supports that they need to survive. So maybe they can go onto a sidewalk and get on a bus, but they don’t have access to the support person they need to actually go to work,” Town said.

“We need to start cultivating not only new leaders, but also [work] at the state and local level for disability groups to come together,” said Kafka. “There’s a lot of good young talent, but it’s not put together yet.”

Heumann’s voice will be heard again in a biopic for Apple Original Films based on her memoir. The film will be directed by Sian Heder, who directed and wrote “CODA (Child of Deaf Adults),” a movie about the deaf community. There’s buzz that Ali Stroker, a Tony Award-winning actress who uses a wheelchair, will portray Heumann.

Heumann said it is essential that an actress with a disability portrays her in the film.

“We’re hoping that the [film] will have significant representation of disabled people, every aspect of it,” she said.