Meat-eating creature weighed 1.4 tons and had special kind of scales to keep cool. 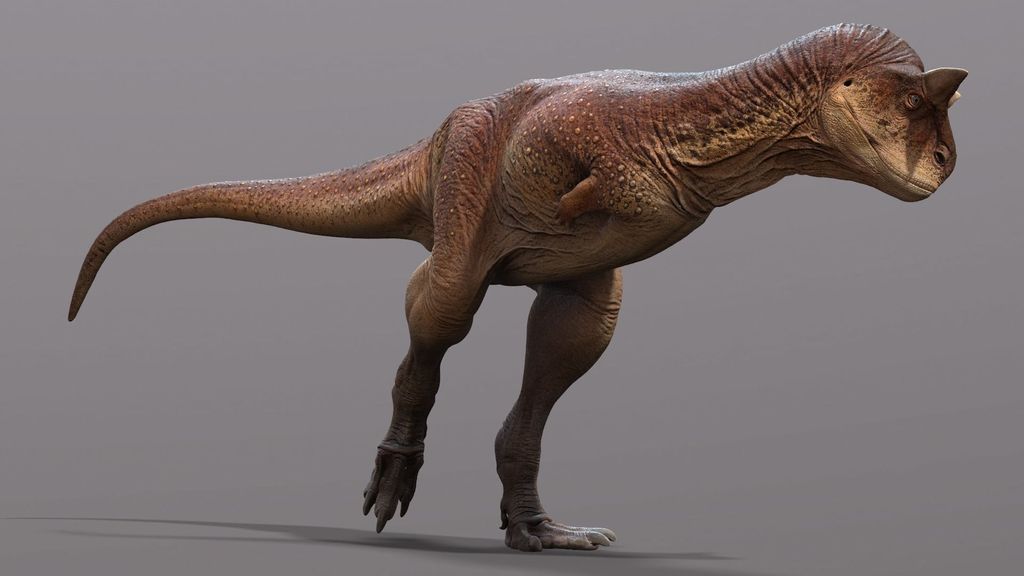 A flesh-eating dinosaur with horns that earned it the name “carnivorous bull” takes shape in a “makeover” — a series of illustrations by researchers studying fossil evidence.

Describing the theropod dinosaur for the first time, the scientists also discovered it had a unique scaly skin, according to their research published in Cretaceous Research.

The skeleton of the Carnotaurus (carnivorous bull) was first discovered and named by Argentine paleontologist José Bonaparte in Patagonia in 1984. It was never properly examined until the recent work by Belgian and Australian paleontologists Christophe Hendrickx and Phil R. Bell.

The skeleton was found with layers of fossilized skin from the dinosaur’s shoulder, thoracic region and tail and possibly neck, making it “the first meat-eating dinosaur discovered with skin,” the researchers said.

The remains were later determined to belong to a 1.4-ton theropod that would have grown to between 24.6 and 29.5 feet in length, dating back an estimated 72-70 million years, to the Late Cretaceous period.

Paleontologists had not studied the skin of the Carnotaurus in detail until Hendrickx, from the research institution Unidad Ejecutora Lillo in San Miguel de Tucuman, Argentina, started examining the remains.

“The study is important because very little is known about the scaly skin of theropods in general, and no one before had ever provided a comprehensive description of the skin of Carnotaurus,” Hendrickx said.

“By looking at the skin from the shoulders, belly and tail regions, we discovered the skin of this dinosaur was more diverse than previously thought, consisting of large and randomly distributed conical studs surrounded by a network of small elongated, diamond-shaped or subcircular scales.”

Hendrickx worked with Bell, an expert in dinosaur skin at the University of New England in Australia, who said the Carnotaurus is reminiscent of the thorny devil lizard found in the Australian outback.

The dinosaur is believed to have been an active predator roaming the plains of Patagonia in search of food.

The researchers believe the diamond-shaped scales on the Carnotaurus’ skin would have been crucial in regulating its temperature, especially during hunts when it would exert huge amounts of energy to move its large body.

“The study provides detailed information on the morphology of the best-preserved scaly skin in a theropod dinosaur in different body areas for the first time,” Hendrickx said.

“The study also reveals the absence of feathers in Carnotaurus (and possibly other abelisaurid theropods) and the presence of large 2-6 centimeter [0.7-2.3 inch] randomly distributed conical scales covering the body.”

Hendrickx hopes the study will set a new standard for how to describe and illustrate the skin and appearance of dinosaurs, and that it will encourage others to undertake the difficult task of determining what these creatures looked like before they went extinct.