Vice President Kamala Harris and Sen. Elizabeth Warren have been called on to help protect Newsom from being ousted on Sept. 14. 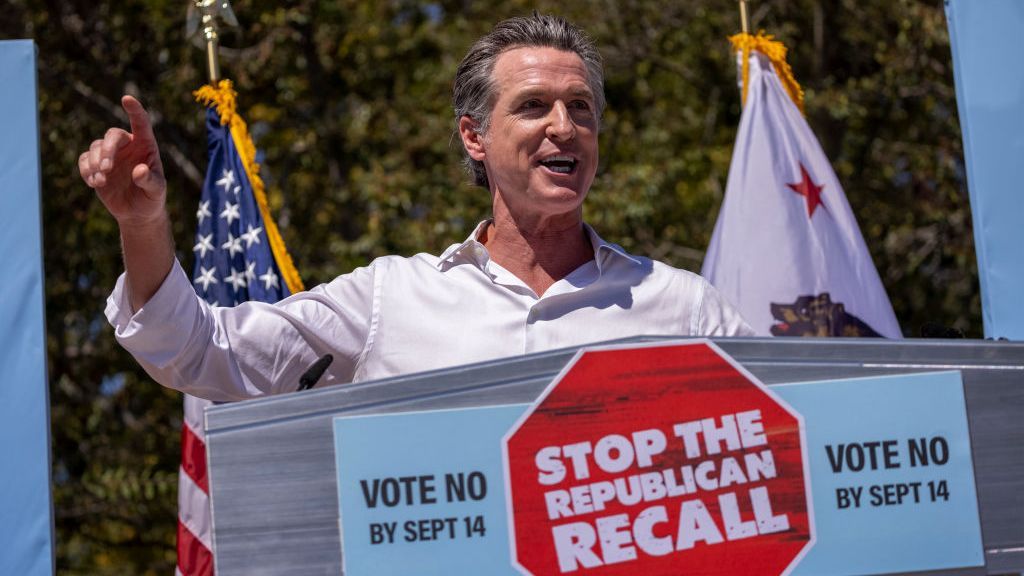 Democratic Party leaders’ all-out effort to keep California Gov. Gavin Newsom from being recalled from office is down to its final frenetic hours.

“Your vote could be the difference between protecting our kids and putting them at risk, helping California recover or taking us backward,” Obama said in the ad.

Polling has favored Newsom to stay in office since the recall effort started in February 2020, but over the course of the campaign, he has faced mounting criticism for his handling of the coronavirus pandemic in California.

Democrats argue that those within their ranks displeased with the governor should vote for a primary challenger next year rather than hand the state to a Republican in the meantime.

“The only issue in the recall is: Will the Democrats be sufficiently energized, sufficiently interested that they would turn out and vote barring some catastrophic negative event?” Jack Citrin, a political science professor and director of the Institute of Governmental Studies at the University of California, Berkeley, told Zenger.

“What it was always going to come down to was, in a largely pro-Democratic state where Democrats outnumber Republicans hugely, the only way that Newsom is going to lose is if somehow Democrats do not vote for him, do not turn out to vote for him or somehow are angry with him and opposed to him,” he said, adding that seemed unlikely.

“There’s never been any evidence that there was large Democratic disillusionment with him.”

U.S. President Joseph R. Biden Jr. is also expected to appear alongside Newsom the evening of September 13 for a final campaign stop in Long Beach. High-profile politicians from the Democratic Party’s progressive wing, including Sen. Elizabeth Warren (D-Mass.), Sen. Amy Klobuchar (D-Minn.) and Rep. Alexandria Ocasio-Cortez (D-N.Y.), have voiced support for Newsom and have called on voters to reject the recall as has Vermont U.S. Sen. Bernie Sanders, an Independent.

“Your vote could be the difference between protecting our kids and putting them at risk, helping California recover or taking us backward,” Obama said in the ad.

The threat of Newsom being replaced by Republican and lead opponent Larry A. Elder, a conservative talk radio host who once called former President Donald J. Trump’s 2016 election the result of “divine” intervention, has also helped galvanize efforts to keep the former lieutenant governor and mayor of San Francisco in office.

The petition to recall Newsom was introduced shortly before the COVID-19 pandemic wreaked havoc in California. He has since been criticized for being slow to reopen industries in the state and for attending a birthday party in November 2020 that looked a lot like the gatherings he had been encouraging residents to avoid.

Other petitioner grievances against Newsom’s leadership include high state taxes, California’s homelessness epidemic, his imposing sanctuary state status for undocumented immigrants and his move to place a moratorium on the death penalty in the state.

A SurveyUSA poll released last week showed that about 54 percent of Californians now oppose the recall effort while 41 percent support it. Data released around the same time by Berkeley IGS indicated that 60 percent of respondents plan to vote to retain Newsom, leaving the governor’s chances of being recalled ‘’pretty implausible,” Citrin said.

“Because what happens in the end, especially when those polls came out, the Democrats got very, very alarmed. They mobilized. Newsom and his team have spent probably $100 million, maybe more, on ads and get-out-the-vote drives.

“All that happened was that the Democrats woke up and they got mobilized.” Citrin added.

“And they started to frame things not just as a Republican plot to overthrow a democratically elected leader, but that should he be defeated, should the recall succeed, then you’d get this radical, anti-vaxxer, anti-abortion, anti-everything that the Democratic Party and the state favor.”

Despite the polls, Republicans have not been letting up in their effort to oust Newsom.

Elder held what was described as the “largest political rally” ever in Santa Barbara last week, and he has taken shots at Newsom’s support from the well-known Democratic figures.

&ZeroWidthSpace;&ZeroWidthSpace;“If Gavin Newsom thinks that flying in Joe Biden and Kamala Harris — not exactly the most admired government officials at the present time — will make him look better, that’s all you need to know about how oblivious and detached Newsom is from a large majority of Californians,” Elder wrote in a tweet.

Republicans tend to vote on election day rather than via absentee or mail-in ballots, which could lead to a potential surge in pro-recall votes on Tuesday. But the prospects of Elder taking the governor’s mansion still remain slim.

“The declining perception among Democratic likely voters that the current recall is appropriate, coupled with the growing belief that the removal of Newsom would lead to things getting worse, are shifts that would help to energize support within the recall opponents’ base,” Mark Baldassare, president and CEO of the Public Policy Institute of California, said in an early September statement.

But a successful recall vote in California — while rare — is not unheard of.

Of the 55 attempts to recall the state’s governor since 1911, one has been triumphant. Voters in 2003 recalled then-Democratic Gov. Gray Davis and elected former Republican Gov. Arnold Schwarzenegger as his replacement. However, two major differences between that recall vote and Tuesday’s could play out to Newsom’s benefit.

“At that point in 2003, the state was much less one-sidedly pro-Democratic,” Citrin said. “Secondly, Schwarzenegger was a credible, popular, rather charismatic, moderate Republican replacement. This time around you have none of the above.”