Sea slugs and manta shrimp are among his favorite subjects. 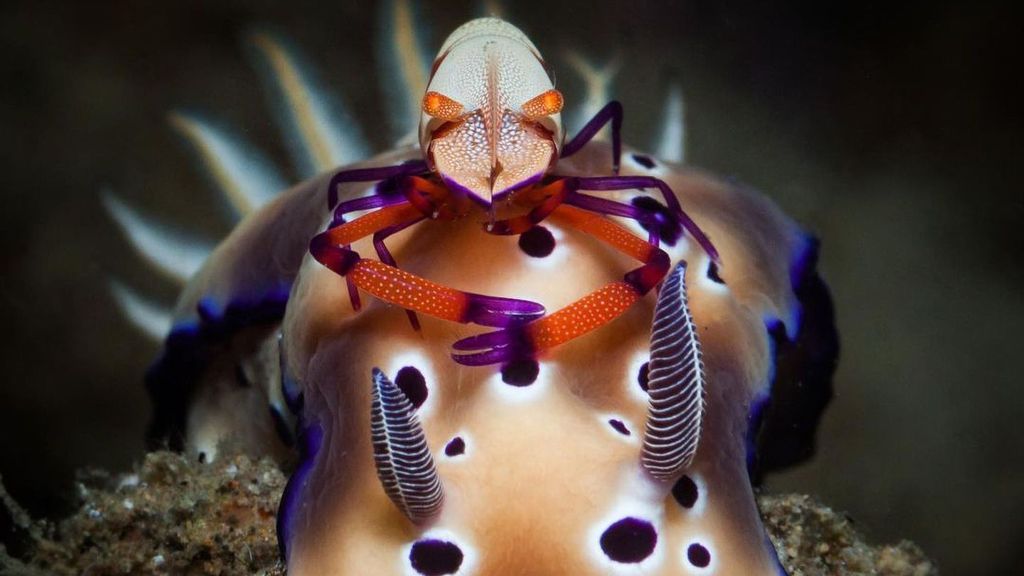 The symbiotic relationship between a nudibranch and an emperor shrimp in waters off the Philippines is captured by Mark Bradiola. (@underwatermojo/Zenger)

Scary-looking marine creatures have captivated deep-sea diver and photographer Mark Andrew B. Badiola, who lives in the Philippines.

He said he dives up to four times a day to capture the perfect image.

Badiola said he has always been passionate about photography, especially underwater photography, but it took time to acquire “the right tools.”

He has snapped an array of jellyfish, marine worms, clownfish, spiny seahorses, soapfish with long antennae, eels, octopuses and other cephalopods.

He started by using his phone, capturing photographs “of whatever I found beautiful. If you have passion for anything, you manage to put in the work and enjoy doing what you love, and then the rest is history.

“The duration of underwater photography usually takes an hour or two, with an hour of surface intervals in between dives, usually three to four dives during the day,” Badiola said.

“If I still have the energy, I do a blackwater dive [a night dive, miles offshore]. I’ve been taking photos underwater for almost a decade, but really got serious in 2015.

“It could be the lighting on the subject or the look in the eyes of a marine animal. It might be the thought of exploring the world beneath, which usually gives you the feeling you are in another world.

“Maybe it’s more of the joy of simply taking the underwater photos. The process itself is the journey. Nature is just awesome. If you open your eyes to the world and nature around you, you’ll be truly Inspired by it.”

He spends at least three days, with multiple dives a day, to make the excursion worthwhile, he said.

“Within three days, I have enough underwater photos of multiple subjects. I usually start my dive at 8:30 a.m. so I can rest in the afternoon. If I still have the energy, I go for a night dive. With a strict one hour of surface intervals in between dives, this allows me to get rid of the nitrogen that builds up in the body.

“Each dive would be one to two hours depending on my air consumption. Photo dives are usually shallow; this allows me longer bottom times.”

His favorite creature, aside from nudibranchs (commonly known as sea slugs) are mantis shrimp: “I’m just simply fascinated by them.”

Badiola said scuba diving “is pretty safe. The danger, I guess, is not knowing what you’re doing and not being aware of what creatures can be dangerous. To be safe is to be mindful of your no-decompression limit … and not to touch anything underwater. Act as a guest when diving.”

He said face masks are being dumped on reefs in addition to the usual waste products tossed in the water.

“It’s vital to create environmental awareness regarding rubbish, especially plastics that are not biodegradable,” he said. “They can break down into microplastics, which are then consumed by marine life, which we consume, as well.

“Our oceans are fragile,” he said. “We depend on them, not the other way around. The food we eat, the air we breathe. We should be more mindful and kind to the environment for future generations.”