After getting his degree in social sciences at the Federal University, Alexandro Cardoso plans to attend graduate school. 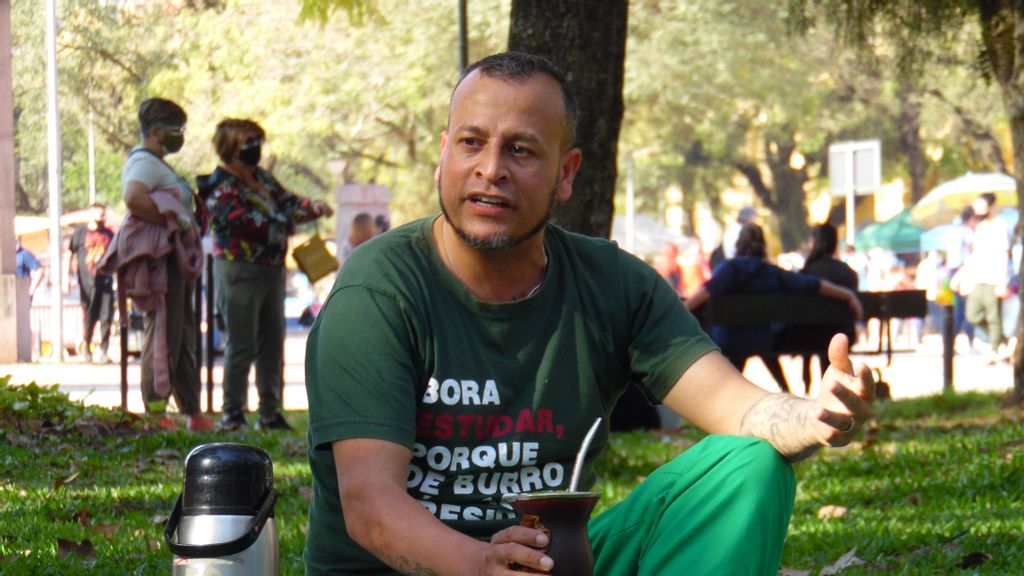 Alexandro Cardoso is studying at the Federal University of Rio Grande do Sul, thanks to a scholarship. (Víctor Cardoso)

The son of recycled-waste collectors, 41-year-old Brazilian Alexandro Cardoso was born into a family that picked through other people’s household garbage.

When he was only two months old, he went with his mother, who carried him as she pushed her cart, looking for recyclable products in the streets of Passo Fundo and Porto Alegre, the capital of the state of Río Grande do Sul.

His parents and six siblings made a living picking it up and turning it in.

“After Alex was born, right away I started to take him with me. At that time, I picked up the recyclable waste along with my husband [now deceased], who did the same work. I didn’t have anybody to leave my son with, so I took him with me while I worked,” says his mother, Tânia Maria Cardoso, a 61-year-old recyclable-goods collector.

Cardoso worked his entire childhood, adolescence and young adulthood doing the same work on the streets of Passo Fundo, the city where he lived and studied through the fifth grade. Then he had to leave his studies behind and move to Porto Alegre with his family.

”I decided to go back to school to have a little more dignity. When I was in fifth grade, I didn’t feel so respectable. We live in a world of appearances, and I saw these people with diplomas and was sad, feeling a little inferior,” said Cardoso.

He wasn’t satisfied with his “street smarts” and the tough, painful lessons of going through garbage every day in exchange for a few coins. He wanted more. But before he went back to school, when he was just 16, he became a father. School plans were put aside.

Work was his priority — going through garbage, taking out the recyclable products, selling them and putting food on the table.

“I’ve been cold and hungry, mainly when going through garbage. Cold kills; people who have no place to take cover really suffer, and hunger hurts. I know very well what it means to get up early, walk a long way, push a cart and go out to pick up recycling in the rain, in the wind. I know how much people suffer, how terrible the cold is and how it can kill,” said Cardoso.

To overcome life’s hardships, in 2015, Cardoso was able to finish his elementary and middle school through the program called Educación de Jóvenes y Adultos (EJA). That was when he took a free, pre-university course, and in 2018, he was accepted into the social sciences major at the Universidad Federal de Río Grande do Sul (UFRGS), in Porto Alegre.

Today, he has a government scholarship for $80 a month.

“I plan to keep up with my studies, to go for a master and PhD, but when I think about my life journey, our story doesn’t have to be one of overcoming hardship. We need to have public policies so that we don’t have to overcome hardships. It isn’t right to romanticize these situations, you know?

“Unfortunately, the current policy is for people to have needs, to be needy. People fight every day, work hard, get up early, take a crowded bus, pay bills. So, we tell stories of self-improvement, but I don’t know how much that helps or makes it harder for people fighting to survive,” he said.

Recently, Cardoso published his first book, “Do Lixo a Bixo: A Cultura dos Estudos e o Tripé de Sustentação da Vida”, with Dialética. It tells the true story of a somewhat illiterate garbage collector who lives in the dangerous housing in risk zones and who started to work when he was still a child, eventually making it to college.

Cardoso’s story is full of danger — being exploited at work and being ostracized — but also a tireless struggle, of resistance to obstacles and achievements.

Regarding ostracism, Cardoso remembers the day he traveled to an event involving recycled material collectors in Brasília, where he stayed at a hotel. When he was registering and filling out the hotel form, he put that he was a recycled waste collector.

“It’s very difficult, embarrassing, because I had to explain to the hotel staff what I did, how, why and where. Going to a hotel and being treated that way is very sad. Unfortunately, these situations almost always come up, and I’m prepared for it, I have the answer on the tip of my tongue,” said Cardoso, who is one of the founding members of the National Recycled Material Collectors Movement.

Cardoso, who now works as a manager in a Recycled Waste Coop in the south of Porto Alegre, talks about his travels and his conferences (before the pandemic), where he told his life story to people all over the world.

Over the years, students, professors and doctors from universities throughout Brazil, as well as people in Uruguay, Argentina, Bolivia, the United States, Germany, France and India have heard him speak.

Lucía Fernández is an urban architect and the global coordinator of the Recycled Materials Collectors with the Organization for Women in Informal Employment at the University of the Republic, in Uruguay. She met Cardoso in 2003, at the National Festival of Waste and Citizens, which took place in Belo Horizonte, Minas Gerais, Brazil.

“My bond with Alex, besides being political, is one of friendship, since I’ve known him for years. We often meet up in other places, like India, Africa, Europe. I’m proud to be part of his story,” she said.

Cardoso’s mother said, “I see my son as a winner, a warrior. I’m very proud of Alex. He has even been an inspiration for his brothers and sisters to go back to school, and that was very good. Alex has taken a step forward and his siblings are following him. All my children left school at a very young age because they had to work and now, as adults, they’ve gone back.”

In the book“Do Lixo a Bixo: a cultura dos estudos e o tripé de sustentação da vida,” the term “Bixo” is an informal name for new college students. In standard Portuguese spelling, it should be written as “bicho.” But as the term has become part of the popular vernacular, the version with an “x” is used at colleges. “Lixo” means “garbage,” so the title means “From Garbage to College Student.”

Translated and edited by Melanie Slone. Edited by Fern Siegel