Helmet display terminals and smart gloves are among tech developments getting a trial run in Oregon’s desert region. 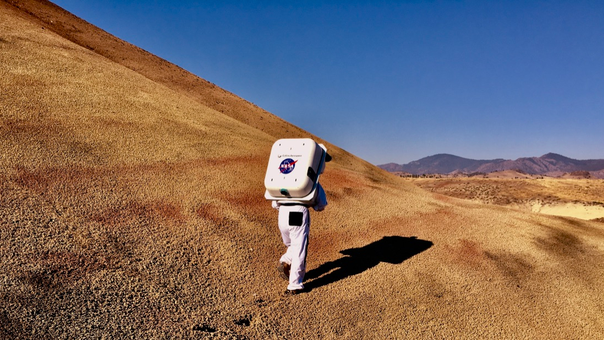 At the same sites in Oregon’s High Desert region where Apollo astronauts once trained and tested their innovative protective gear, NASA and cooperating organizations in September tested new spacesuit technology while incorporating lessons learned from America’s manned and robotic missions to the moon and Mars.

“It was exciting to be in Oregon to revisit some of the very locations where, in 1964 and 1966, the Apollo astronauts received field training in geology and tested spacesuits,” said planetary scientist Pascal Lee of the SETI Institute and the Mars Institute.

“We have also identified new candidate sites for moon and Mars exploration preparation, now that we know more, compared to the mid-’60s, about the moon and Mars,” said Lee, the director of NASA’s Haughton-Mars Project.

NASA’s Artemis Program aims to land the first woman and next man on the moon, near the lunar south pole, by 2029 and eventually send manned missions to Mars. Several new technologies are in the development and testing stage to ensure the safety, productivity and cost-effectiveness of future EVAs (Extra-Vehicular Activities) or spacewalks on the Red Planet and the moon.

“We see the integration of our Information Technologies and Informatics Subsystem into a spacesuit as a game changer for conducting EVAs,” said Greg Quinn, who leads advanced spacesuit development at Collins Aerospace.

“While real-time mission support from Earth will remain important, exploring the lunar poles, where NASA intends to land Artemis astronauts, means that direct-to-Earth communications will not, at times, be possible, even via orbital relays. So, we need to provide future lunar explorers with the means to safely perform more autonomous EVAs,” Lee explained. “The need for autonomy will be further compounded in the case of Mars, where communications delay will drastically limit real-time mission support from Earth.”

While astronauts currently rely on checklists written on notebooks attached to their elbows, Collins has developed technology that allows them to track checklists and their vital signs and those of their EVA companions through a display system in their helmets.

With the new technology, astronauts can also monitor a wide range of EVA systems, such as their location, oxygen and water reserves as well as their distance from supplies. They can also access maps and other data. EVA systems requirements for future lunar pit and cave exploration were also investigated in Oregon, a first for a spacesuit manufacturer.

The field trial integrated Ntention’s Astronaut Smart Glove (ASG) with the Collins technology. The ASG provides a human-machine interface (HMI) in the helmet and glove, allowing the astronaut to operate robotic arms, cranes, rovers and drones with minimal hand gestures, compatible with wearing a constricting and rigid pressurized spacesuit. The ASG field test demonstrated the successful collection of rock sample materials from remote locations not directly accessible to the astronaut.

“Our field test this year demonstrated how an HMI like our Astronaut Smart Glove system can be seamlessly integrated into a spacesuit and offer future astronauts on the moon and Mars much greater perception, reach and control of their surroundings,” said Moina Tamuly of Ntention.

“By coming to Oregon, we wanted to recapture Apollo’s historic legacy but also scout out new experiences for future astronaut training and spacesuit testing as we take on this century’s new challenges, the lunar poles and Mars,” Lee said.