Astronomers Obtain The Sharpest Images Yet Of Dog-Bone Asteroid Kleopatra 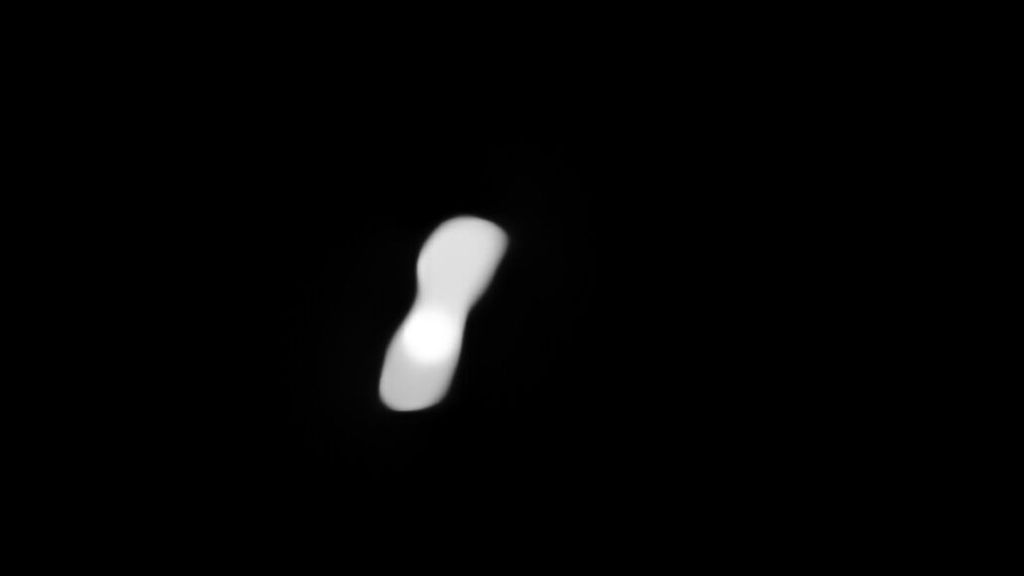 This processed image, based on observations taken in July 2017, shows the two moons of the asteroid Kleopatra (the central white object), AlexHelios at the top-right and CleoSelene at the bottom-left corners of the picture. (ESO/Vernazza, Marchis et al./MISTRAL algorithm (ONERA/CNRS))

Astronomers in Chile have captured the sharpest pictures yet of Kleopatra, a strange asteroid that looks like a dog bone.

The European Southern Observatory’s Very Large Telescope (ESO’s VLT) in the South American country was used by a team of astronomers to obtain a 3D image of Kleopatra and find clues about how it and its two orbiting moons were formed.

“Kleopatra is truly a unique body in our solar system,” said astronomer and lead researcher Franck Marchis. “Science makes a lot of progress thanks to the study of weird outliers. I think Kleopatra is one of those and understanding this complex, multiple asteroid system can help us learn more about our solar system.”

The Kleopatra asteroid circles the sun as do other celestial rocks in the asteroid belt that lies between Mars and Jupiter. It was dubbed the “dog-bone asteroid” when radar observations 20 years ago revealed its two lobes are connected by a thick “neck.” The latest findings appeared Sept. 9 in Astronomy and Astrophysics.

In 2008, Marchis and colleagues discovered that Kleopatra is not only shaped like a dog bone, but also orbited by two moons, named AlexHelios and CleoSelene, after the Egyptian queen’s children. They lie about 200 million kilometers from Earth.

Marchis and his colleagues used images of Kleopatra taken at different times between 2017 and 2019 by the Spectro-Polarimetric High-contrast Exoplanet Research (SPHERE) instrument. As the large telescope rotated, the astronomers saw the asteroid from various angles, thereby creating the most accurate three-dimensional models of it so far.

Marchis’ team discovered that one of Kleopatra’s lobes is larger than the other and determined that the asteroid is about 168 miles (270 kilometers) long, about half the length of the English Channel.

Miroslav Bro&zcaron; of Charles University in the Czech Republic and his team reported in a separate study, also published in Astronomy and Astrophysics, that they used the SPHERE observations to determine the orbits of Kleopatra’s two moons. The new observations made with ESO’s VLT showed that the moons were not where older data predicted them to be.

“This had to be resolved,” said Bro&zcaron;. “Because if the moons’ orbits were wrong, everything was wrong, including the mass of Kleopatra.” Using new observations and modeling techniques, Broz and his team calculated Kleopatra’s mass, finding it to be 35 percent less than previous estimates.

Kleopatra was found to have a density less than half that of iron and is now thought to have a metallic composition but also a porous structure. Described in the study as a “pile of rubble,” Kleopatra may have formed as post-impact reaccumulated material.

Its structure and manner of rotation indicate how Kleopatra’s two moons were formed. Because it spins almost at a critical speed that could break it apart, small impacts might have lifted pebbles off its surface, thus creating AlexHelios and CleoSelene.

“I can’t wait to point the ELT at Kleopatra to see if there are more moons and refine their orbits to detect small changes,” Marchis said.

«Previous Post
VIDEO: Headed For The US Capitol: How The Flight 93 Heroes Averted A Bigger Disaster On 9/11»Next Post
Haitians Concerned Over Lack Of US Assistance To Homeland In Crisis