Primaries are mandatory and will be held on Sept. 12. 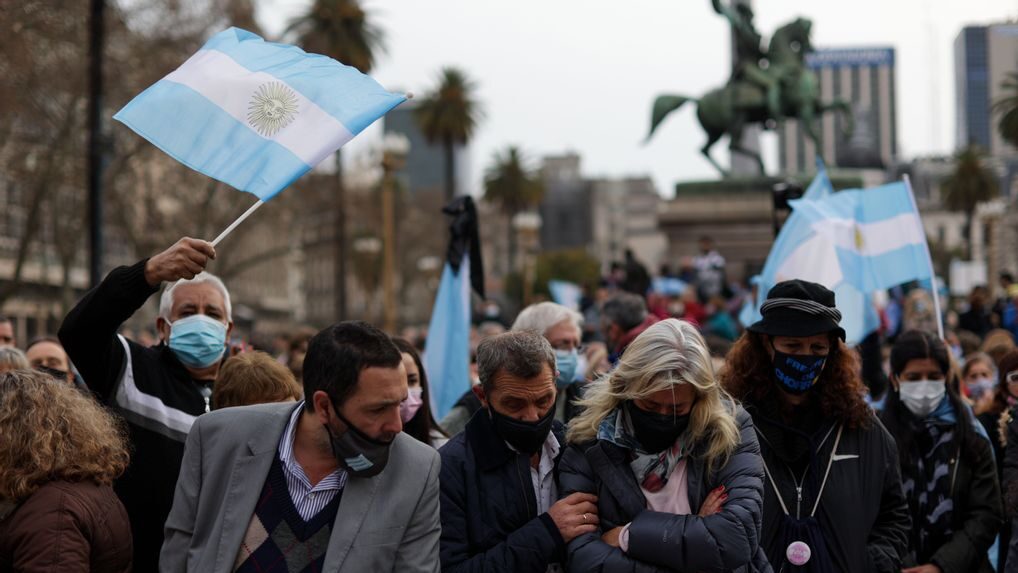 Argentines demonstrate in Buenos Aires on Aug. 16. In the so-called “March of the Stones,” they remembered the more than 110,000 COVID-19 deaths in the country at the time, with a stone as a symbol of each victim. In the Sept. 12 primaries, they will be able to express their discontent or support for the government and its handling of the pandemic and other issues. (Tomas Cuesta/Getty Images)

Amid an economic and political crisis, Argentina will hold primary elections that will measure President Alberto Fernández’s approval rate.

Argentines will choose their candidates for Congress on Sunday, Sept. 12. A third of the Senate and half of the Chamber of Deputies are up for election.

Candidates from all political parties in Argentina must compete in simultaneous national primaries. Even consensus candidates — who are not facing any opposition within their party — must show up. People can skip voting and pay a fine instead.

In addition to choosing candidates, the primaries help measure the parties’ support for the general election.

In Argentina, primaries can have economic and social consequences. They are called PASO, which stands for “primary, open, simultaneous and mandatory” in Spanish. The outcome of the last PASO, held in August 2019, triggered a fall in the stock market, which doubled the so-called “sovereign risk” and led to a devaluation of the Argentine peso by 20 percent.

The winner of that election, President Alberto Fernández, is in a different position today.

“Argentina’s [current] scenario is very different from that of 2019. At that moment, many citizens, disappointed with the economic management of former liberal president Mauricio Macri, voted for the Frente de Todos [the coalition that brought Fernández to power],” Nicolás Solari, a political analyst at Real Time Data Corp, told Zenger.

“After two years at the helm of the Casa Rosada, President Fernández was unable to improve Argentina’s economy, which has led to growing disenchantment. Our studies show that the government coalition could experience a strong setback at the polls,” he said.

Jorge Giacobbe, a political analyst at Giacobbe & Asociados, thinks it is crucial to understand who holds power in Frente de Todos.

“Its political force does not come from Alberto Fernández. Neither does it come from an alliance, but from Cristina Fernández de Kirchner [president between 2007 and 2015, and leader of the faction of Peronism called Kirchnerism]. … Alberto Fernández is not a leader. He is the scapegoat of a group that tried to return to power without suffering the wear and tear of the drama that it had to face,” he told Zenger.

Fernández took office on Dec. 10, 2019 and has faced several challenges in the last two years. Argentina is among the ten countries with the highest number of COVID-19 cases. The economy has worsened, extreme poverty is increasing, and he has been involved in numerous political scandals.

In the international arena, Fernández was widely criticized in mid-June when he said that Argentines descended from [European migrants’] ships, while Mexicans came from indigenous people, and Brazilians from the jungle, in a joint act with the president of Spain.

Fernández wrongly attributed the quote to Mexican Nobel laureate Octavio Paz. He explained his comment later on Twitter. “We received more than 5 million immigrants who lived with our native peoples in the first half of the 20th century. Our diversity is a pride,” he said.

But the biggest scandal would come in mid-August, with photos from the birthday dinner of his partner, Fabiola Yáñez, circulating on social media. Yáñez held her dinner in July 2020 at the presidential residence, and at the time, social gatherings were forbidden through an executive decree.

The contradiction unleashed the opposition’s outrage, and Fernández was charged with violating the regulation he had signed.

The results of the primaries could help measure the government’s popularity and its ability to recover from what seems a general rejection of the Fernández administration.

“What has shifted — compared to 2019 — is the soft vote of those who were angry with Cristina Kirchner and Mauricio Macri. The soft public is always angry with whoever is in power,” said Giacobbe.

He explained that the “soft public” saw in Alberto Fernández the possibility of a kinder Kirchnerism, a liberal but moderate president, “who would be less scary than Cristina [Kirchner].”

Giacobbe said the president those voters were expecting “never appeared, and they may redefine their electoral behavior in the coming election.”

Carlos Fara, a political consultant, believes that any outcome other than a victory will hurt the party in power.

“Fewer people will vote now because they are annoyed with the election and with politics in general. But the government needs to get a substantial difference [of votes] regardless. Usually, more people will vote in a general election than in the primaries. A greater turnout would favor Juntos por el Cambio, the main opposition.”

If the primaries turn out to be tight, “even if the party in power wins, there will be concerns about a tie or narrow loss in the November election,” Fara told Zenger.

On the other hand, many popular politicians are running for the opposition in the primaries. Up to five 2019 presidential candidates (Nicolás del Caño, Juan José Gómez Centurión, José Luis Espert, Manuela Castañeira and Alejandro Biondini) are now running for seats in Congress, representing different political groups.

“In the previous primaries, a wide variety of candidates did not get 1.5 of the votes [which is what they need to advance to the next round] and were left out of the competition,” said Fara.

“Of course, it is an opportunity for the opposition to win positions that the ruling party loses. … Eight provinces will elect senators. … The government may lose its senators in three: Corrientes, Santa Fe and Chubut. … That moves the ruling party away from the possibility of controlling two-thirds in the Senate, forcing it to negotiate,” said Fara.

“The primaries are crucial because they will test President Alberto Fernández’s leadership. He appointed the candidates in the country’s main districts and has said that the election is a referendum on his government. They are also crucial for Horacio Rodríguez Larreta, Mayor of the City of Buenos Aires, who chose the main candidates of the opposition coalition and may run as its presidential candidate for 2023,” said Solari.

“The primaries’ outcome is strongly correlated with that of the general election, although it is also true that usually, between the former and the latter the main non-Peronist force grows, to the detriment of smaller parties,” he said.

Argentines do not vote now “to give Kirchnerism more or fewer deputies or senators. Their goal is much simpler: either to caress the government or slap its face; reward or punish, which is why the primaries are so important,” said Giacobbe.

People don’t care about “the balance of deputies, or their proposals. They just have that goal, which sounds simple, but it is the most concrete of all,” he said.

Argentina’s authorities have announced that the results will arrive later than usual, as polling places must comply with sanitation protocols.

Translated and edited by Gabriela Olmos; edited by Melanie Slone and Kristen Butler