Off With Her Gems: Doomed Marie Antoinette’s $4 Million Diamonds To Go Under The Hammer

Queen smuggled her bracelets out of France while awaiting her execution by guillotine. 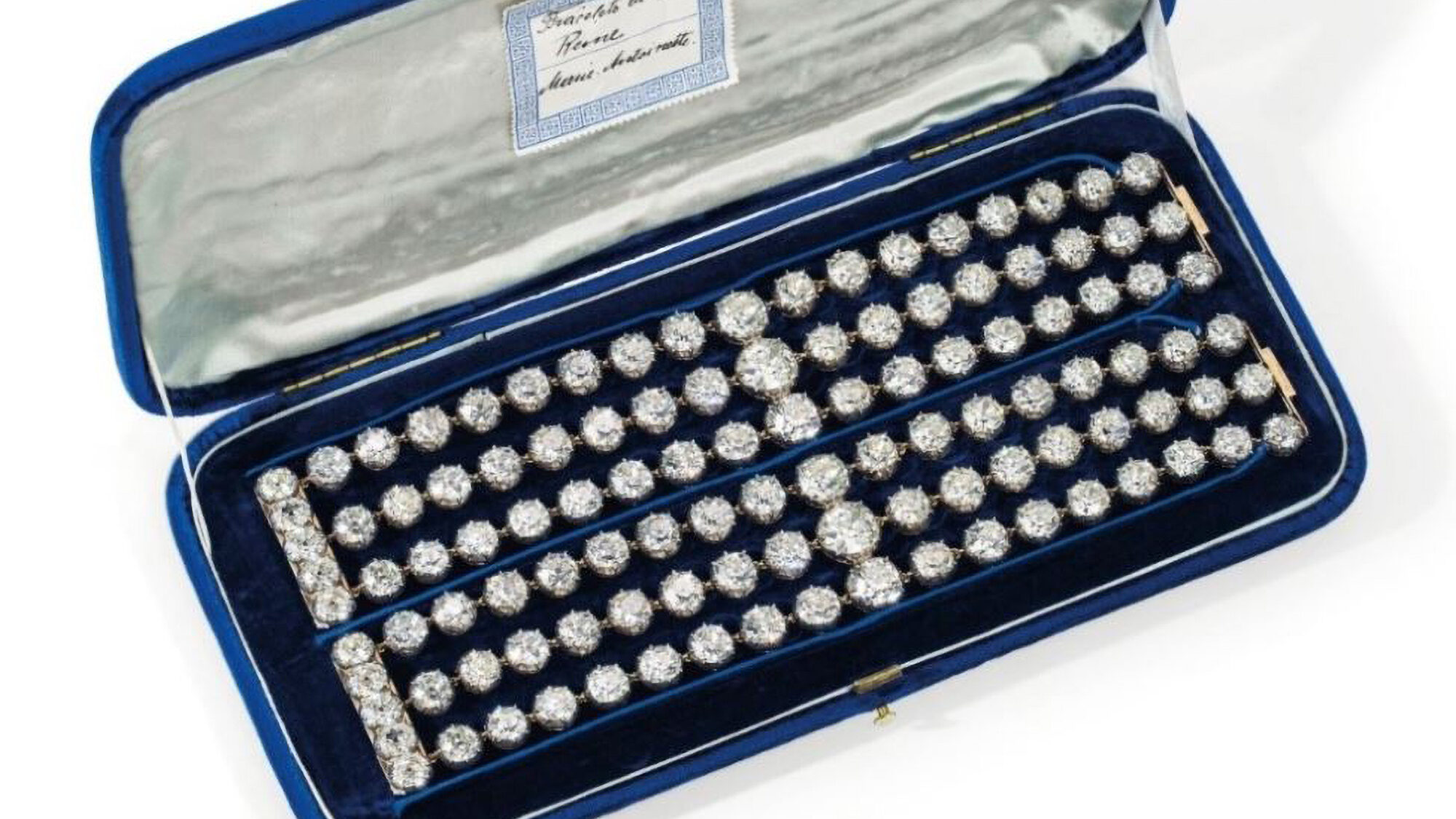 Christie’s in Geneva, Switzerland, will auction bracelets made from 112 diamonds, valued at $2 million to $4 million, in November. The jewelry once belonged to Marie Antoinette, queen of France until the French Revolution doomed her to the guillotine. (Christie’s/Zenger)

Diamond bracelets worth millions that belonged to Queen Marie Antoinette of France could soon be hanging around the wrist of someone who isn’t doomed to the guillotine.

Christie’s is auctioning off 112 diamonds dating to the queen’s 1774-1793 reign, in their original form. The gems are set in a pair of bracelets with an estimated value between $2 million and $4 million.

The young queen purchased the diamonds in 1776, the year of the American revolution, for 250,000 livres, “a huge sum at the time,” according to the auction house. The French livre, a currency in use since 781, was equivalent to the value of one pound of silver. The French franc replaced the livre in 1795.

“In 1776 Marie Antoinette had been queen of France for two years and was already recognized as the queen of elegance and style. She could not resist jewelry — especially diamonds,” Christie’s said in a statement.

“According to Count Mercy-Argenteau, Austria’s Ambassador to France, [the sellers] were paid partly in gemstones from the queen’s collection and partly with funds the queen received from King Louis XVI.”

After the count left his post as ambassador in 1790 and left for Brussels, he received a letter from Queen Marie-Antoinette, then a prisoner in the Tuileries in Paris.

“It announced that a wooden chest would be sent to him for safekeeping. Mercy-Argenteau stored it unopened for the next couple of years.” Christie’s said of the 1791 letter. Marie Antoinette was executed by guillotine on Oct. 16, 1793. Emperor Francis II of Austria ordered the chest opened and inventoried in Brussels in February 1794.

Marie Thérèse, the daughter of Marie Antoinette and Louis XVI, received the jewels upon her arrival in Austria in January 1796.

Christie’s jewelry auction will be held Nov. 9 at the Four Seasons Hotel in Geneva.

Marie Antoinette was an Austrian archduchess who became the last queen of France before the French Revolution. The phrase “let them eat cake” is often, albeit erroneously, attributed to her.

Marie Thérèse was her only surviving daughter. Her siblings all died before age 11.

This is not the first time Marie Antoinette’s jewelry has gone under the hammer. In 2018, Sotheby’s auctioned a pearl and diamond pendant that once belonged to her for $36 million, a record for a pearl on the auction block and 18 times the starting bid.

A buyer at the same event paid more than $443,000 for a ring encrusted with diamonds arranged to form the monogram “MA.” The ring contained a lock of the ill-fated queen’s hair.