Exiled ex-president Blaise Compaoré and 13 others to be tried over the 1987 murder of his famous predecessor, Thomas Sankara. 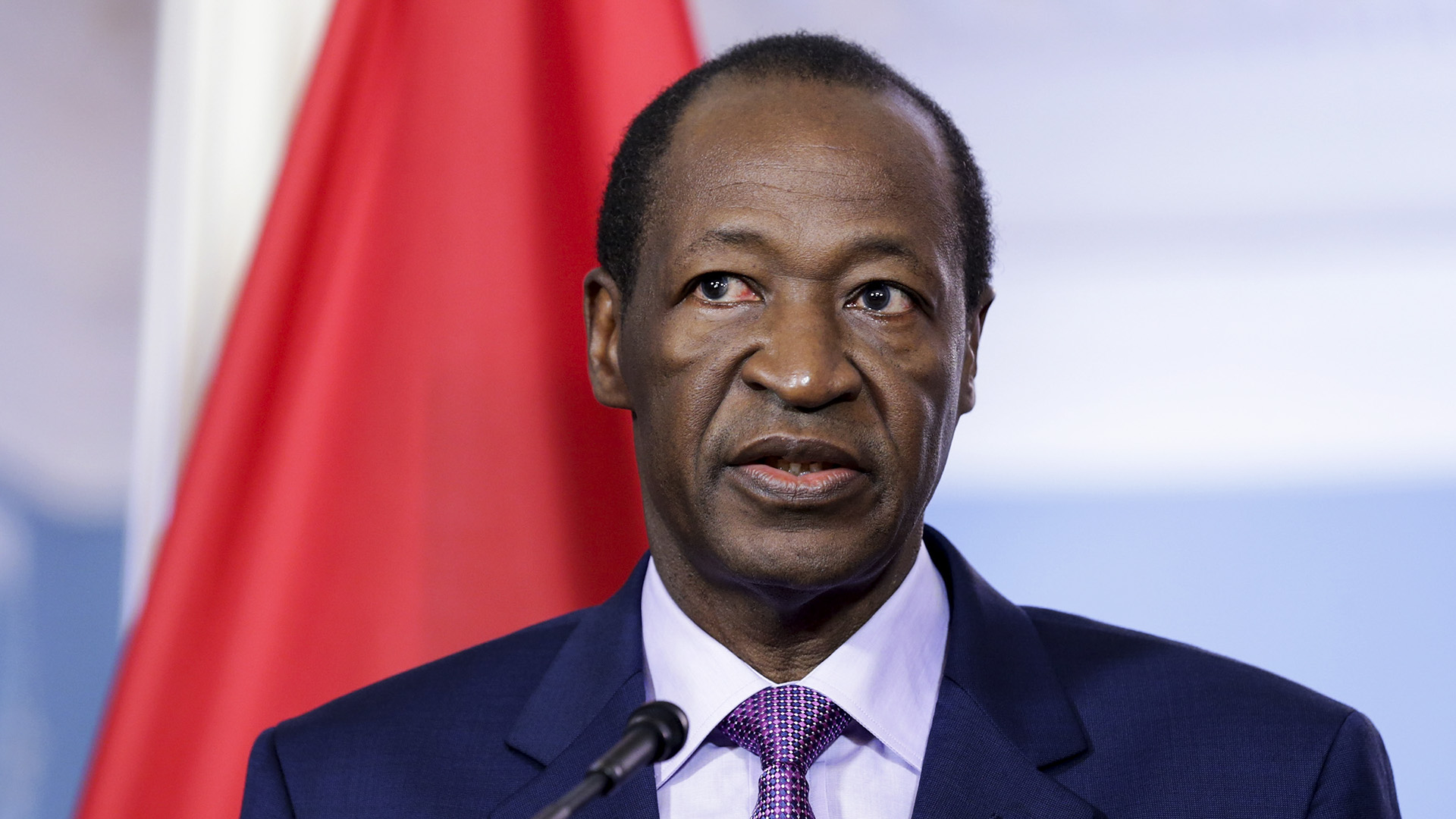 Deposed in 2014 protests and exiled in the Ivory Coast, Blaise Compaoré will be tried in absentia alongside 13 other government officials, including his security chief, Hyacinthe Kafando. (Chip Somodevilla/Getty Images)

Four years later, the same officers who propped Sankara to power, led by his friend, Compaoré, orchestrated another military coup, killing Sankara and 12 others.

After years of campaigns by his family and supporters, Sankara’s killers will face justice when the trial of the 1987 coup suspects begins on Oct. 11, 2021.

Fondly referred to as Africa’s Che Guevera, he changed his country’s name from Upper Volta to Burkina Faso, [Land of Honest Men], a name he coined using a word from the country’s two major native languages, Mòoré and Dioula.

He was an airforce pilot known for his love of motorbikes and amateur guitar skills and cut a popular and charismatic figure in the capital, Ouagadougou, and beyond.

Luc Damiba, the secretary-general of the International Thomas Sankara Memorial Committee, was just 11 when Sankara died, yet he still remembers his virtues.

“Sankara embodied integrity in all its glory,” he told Zenger News.

“He was a visionary, a sincere patriot, and a realist. He wanted happiness in equal measure for all citizens. He is a treasure that gets better over the years. Burkinabés, especially the youth, are beginning to appreciate the vision he had for Burkina Faso and Africa.”

During Compaoré’s 27-year rule, mentioning Sankara’s name in Burkina Faso was taboo, but the ex-president always denied involvement in his predecessor’s assassination.

Deposed in 2014 protests and exiled in the Ivory Coast, Compaoré will be tried in absentia alongside 13 other government officials, including his security chief, Hyacinthe Kafando.

They face charges ranging from complicity in the assassination, attack on state security, concealment of corpses, among others.

“Discovering the truth about Compaoré’s role in Sankara’s death is subscribing to justice, which is the best thing to do for the people of Burkina Faso in particular and Africa in general,” Peter Sakwe Masumbe, a lecturer in Public Policy, International Relations and Conflict Studies in Cameroon’s University of Buea, told Zenger News.

“Hissène Habré’s trial and imprisonment cooled several hotheads in Chad. Jacob Zuma’s sentence raised hope for the oppressed in South Africa in the application of the rule of law, which is a great pillar in the culture of democracy.”

The prosecution of African leaders in Africa soil, as opposed to international jurisdictions, such as the International Criminal Court, shows Africa’s willingness to use its institutions to fight impunity, said Suh I Fru Norbert, a lecturer in the Department of Political Science and Comparative Politics in Cameroon’s University of Buea.

“There is credible hope for effective justice across the continent given that such trials are likely to produce deterrent effects. These trials renew trust in Africa’s institutions.”

The trial will take place amid a national debate on whether to pardon the ex-president in the interests of national reconciliation.

However, Farama Prosper, one of the lawyers representing the relatives of the slain former president, said those asking for Compaoré’s pardon are demanding “more and not less impunity.”

“We do not build a democratic society based on emotions,” he told Zenger News.

“There is just a problem of injustice and impunity that has lasted for more than 30 years. Compaoré must be judged fairly and impartially. If he is guilty, he will be convicted, and if he is innocent, acquitted. This is the rule of law.”

Masumbe described Compaoré’s adoption of Ivorian citizenship as a “political maneuver”, but that does not remove the noose from his neck.

“If Ivorian leaders believe in the rule of law, the best thing for them to do is to hand him over to the Burkinabe authorities so that he faces the trial and its consequences.”

Suh said trying suspects in absentia is not new.

“After all, being physically present during trials does not mean you must say something. Habré of Chad never uttered a word to defend himself during his trial,” Suh said.

There is no genuine reconciliation without credible justice, he said.

“Reconciliation can follow during the execution of his punishment (in case he is found guilty). Also, if found guilty, he could still benefit from a presidential pardon. We can cite the example of Laurent Gbagbo in the Ivory Coast, who had to go through a trial [at the International Criminal Court]before engaging in any reconciliation process.”

Some of Compaoré’s co-accused have also died, which Prosper termed a “pity.”

“This is why this trial must be held urgently. Better late than never.”

Sankara’s remains were exhumed in May 2015 at the request of his relatives, but DNA testing did not positively identify his body.

“For the others, [killed alongside him] it was positive. So doubt still exists in the minds of many Burkinabés if the body that was buried is his,” Damiba told Zenger News.

For many who regard Sankara as a national and continental hero, the trial represents a historic moment for Burkinabes and Africans generally to finally solve the mystery of Sankara’s death.

“This trial is the symbol of the victory for all men and women who love justice, the truth and represents the fight against impunity,” Prosper told Zenger News.

The country unveiled a five-meter bronze statue of Sankara in March 2019 in Ouagadougou, depicting him in army fatigues, an arm raised, his face gazing at the horizon.

A new Thomas Sankara Memorial building inspired by his vision is underway.

“At the beginning of the revolution in 1983, Sankara mobilized people to participate financially, materially, and physically in development, such as building a school, a health center, acquiring an ambulance for a village, etc. Campaigns for the Thomas Sankara Memorial also consist of mobilizing citizens to contribute towards this noble project,”Damiba told Zenger News.