The University City Of Caracas, A World Heritage Site, Is Falling Apart

After years of neglect, Presdient Nicolás Maduro’s regime has appointed a recovery commission. 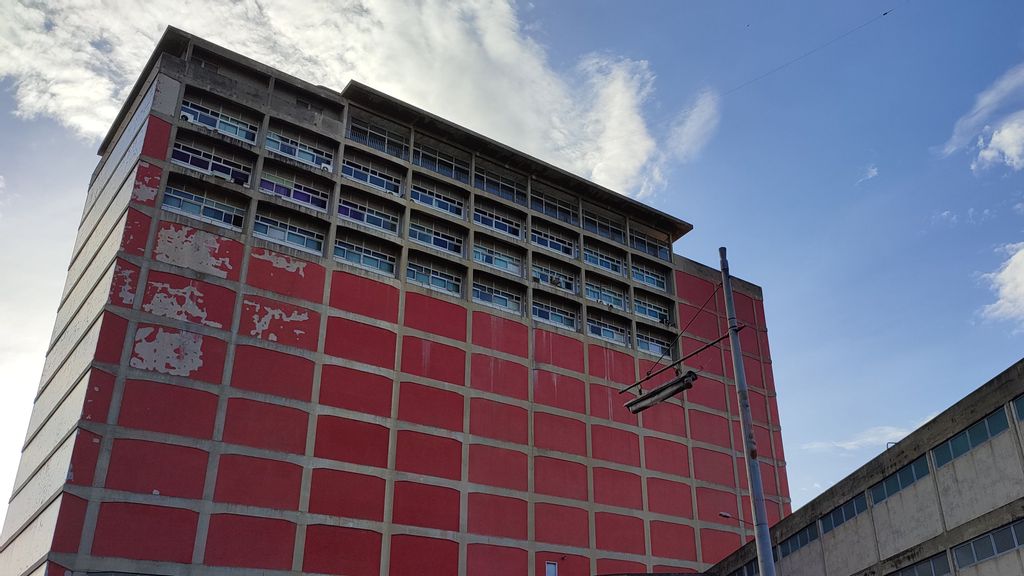 The Central Library's facade has not been restored in years. (Felipe Torres Gianvittorio/Zenger)

CARACAS, Venezuela — The Central University of Venezuela is its country’s greatest higher education icon. Founded in 1721, it is also the oldest university in Venezuela.

Central University has remained the primary example of Venezuelan public and free education, decreed in 1870 by then-President Antonio Guzmán Blanco.

However, with the country’s deep crisis, its buildings have been in severe decline for years.

Its main campus, the University City of Caracas, was built by decree of then-President Isaías Medina Angarita between the 1940s and 1960s. Architect Carlos Raúl Villanueva designed the project and led the construction.

UNESCO declared the University City of Caracas a World Heritage Site in 2001.

Koïchiro Matsuura, UNESCO’s then-Director General, said at the time the University City is “a masterpiece of urban planning, architecture and art, as well as an outstanding example of the coherent realization of the artistic, architectural and urban ideals of the early 20th century.”

In the early 2000s, the Central University students protested against the Chávez regime. The executive imposed bureaucratic obstacles to its operation in response, with budget cuts and attacks on university autonomy as constant threats.

“There is always a shortage of money in public universities. When I was a student, that was a constant problem, and it was up to the students to take care of the campus through awareness campaigns,” Alejandro González, an engineer who graduated from Central University, told Zenger.

“But the government’s neglect became more evident and intentional after the student demonstration against Chávez in 2007. Due to the student movement’s repercussions, that was the only election that Chávez lost,” he said. (Hugo Chavez was president of Venezuela from 1999 until his death in 2013, with a brief electoral loss in 2007.)

The government sponsored a referendum in 2007 following Chávez’s re-election the previous year. Its main issues were constitutionally declaring Venezuela a socialist country and allowing the president’s indefinite re-election. The student movement, of which the Central University was a part, led the campaign opposing both issues — and won with 56 percent of the votes.

Students have protested other referendums over the years.

In recent years, insecurity within the campus increased, with the University City suffering several thefts. From furniture to lab equipment and even office wiring, the losses had been increasingly difficult to replace.

But the most significant concern is the buildings’ structural damage. Experts explain that concrete’s useful life is 50 years, which is why, at this point, most buildings require urgent maintenance.

In June 2020, a section of a hall’s roof collapsed due to a lack of maintenance, which set off alarms among the student community.

Hasler Iglesias, former president of the University Center Federation, said at the time that “the University is not able to keep its infrastructure” and that “the conditions of the section [that broke] are not exceptional, the entire campus is like this.”

The School of Political Studies caught fire in June 2021, but the Central University’s firefighters could not control it, due to a lack of water. The fire lasted for hours until the Capital District’s fire department was able to put it out. The event unleashed the outrage of students and graduates.

The fire ultimately prompted the government of President Nicolás Maduro to get involved.

In early August, the Minister for University Education César Trómpiz announced the creation of three subcommittees in charge of recovering the Central University spaces: one responsible for analyzing the campus infrastructure, another for coordinating with the authorities and following institutional policies and, finally, a person in charge of the campus maintenance.

However, the student community believes the government should not maintain the university, but be responsible for allocating adequate budgets.

“If the State assigned what the university requests, there would be no need for a presidential commission. With these resources, the university could maintain the infrastructure and meet the needs of academic life,” Jesús Mendoza Morales, a university advisor and the president of the Dental Student Center, told Zenger.

“The Central University requested the University Sector Planning Office in November 2020 the budget it needed [to operate in 2021]. The office only approved 2.27 percent. For the Simón Bolívar University, it was worse, with 0.5 percent of what they requested approved. But it is not only that they approve a pyrrhic percentage of the requested amounts, but also that the office does not pay it on time. … In August, the Central University had not received a single bolivar from the [2021] budget,” said Mendoza Morales.

Many believe the government is acting with the campaign for the November regional election in mind. “They seek to play a political game and make a big deal out of appointing a commission when they are not complying with the law,” he said.

The university budgets have been a problem for decades.

“There has never been enough money to pay teachers. The amounts have never been complete. I remember that teachers and employees often went on strike in the Seventies and Eighties because the university could not pay them. … This is not exclusive to Central University. All national universities have historically lacked resources,” María Pelayo, a political scientist who graduated from the Central University of Venezuela, told Zenger.

“When it comes to the use of resources, Venezuelans have always been careless. But, since the arrival of Chavismo, the country’s marginalization is evident in all its aspects,” she said.

“The university’s internal authorities are not free from responsibility. They have been bowing their heads, receiving what the government has available instead of looking for alternatives. … For example, the Andrés Bello Catholic University [private] has requested help from its graduates to upkeep its facilities and pay the salaries. The Central University probably has the largest graduate network in Venezuela, and it should make them contribute,” said Pelayo.

Beyond the concern for the university’s architectural heritage, the problem affects thousands of students who try to continue their careers despite all adversities.

As of 2016, it had 11 faculties, with 40 departments and five research centers spread across the country, with 54,222 undergraduate and 8,317 graduate students registered, according to the World University Rankings.

No other university in Venezuela has the infrastructure to accommodate the tens of thousands who study, as its motto says, in “the house that conquers the shadows.”