The law effectively deputizes private citizens to act at attorneys general, and experts warn that might not stop with abortion. 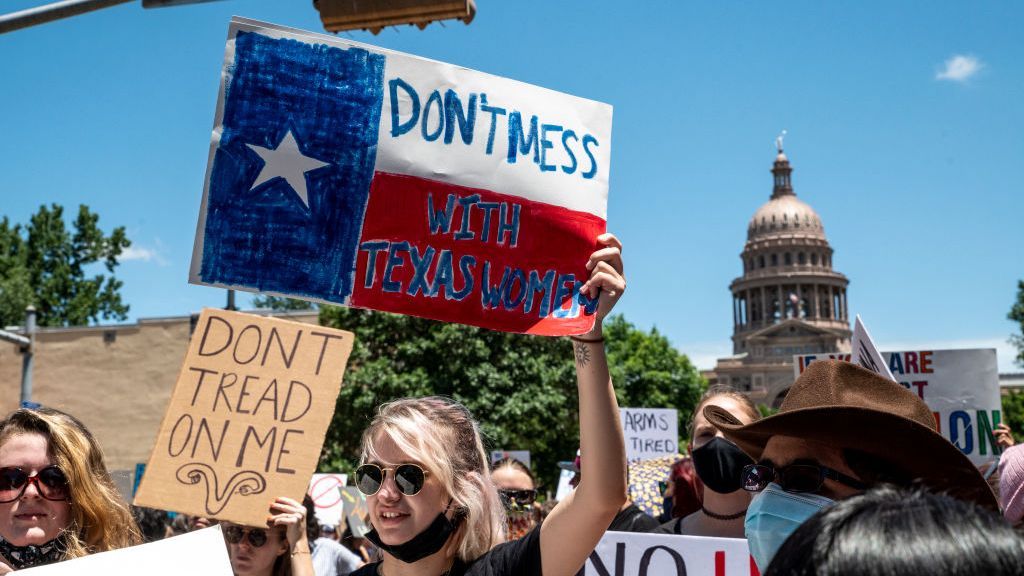 Protesters hold up signs outside the Texas state capitol in Austin, Texas, on May 29, in response to the introduction of the bill outlawing abortions after a fetal heartbeat is detected. (Sergio Flores/Getty Images)

The first-of-its-kind Texas law that allows citizens to police a ban on abortions after six weeks of pregnancy may have unwittingly created a framework for U.S. states to limit other constitutional rights — if the Supreme Court eventually upholds it.

The court last week declined an emergency request to block the Texas law, which prohibits abortions once cardiac activity can be detected in the embryo, making it the first so-called “heartbeat” bill in the U.S. to take effect. Unlike earlier attempts to ban abortions, the new law calls on private citizens rather than state officials to enforce it.

That makes it more difficult to challenge in court — and, crucially, that may provide other states a roadmap to ban other constitutional rights, said Dr. Herminia Palacio, president and CEO of the Guttmacher Institute, a New York-based pro-choice research group.

“By not stopping this abortion ban, the U.S. Supreme Court has opened the floodgates for other states to enact similar laws,” Palacio told Zenger.

Twelve other U.S. states have passed bans on abortions early in a pregnancy, but courts have blocked all of them, citing the Supreme Court’s 1973 Roe v. Wade decision that found women have a right to the procedure on constitutionally protected privacy grounds.

The Texas law, though, has been designed to be insulated from federal review. Rather than explicitly banning abortion, it deputizes Texas residents to sue anyone who performs — or “aids and abets” — an abortion, with successful plaintiffs eligible for up to $10,000. As the law bars Texan officials from enforcing it, any lawsuit aiming to block it as unconstitutional faces difficulties, given such suits typically name state officials as defendants.

“The court effectively has condoned a devious and unprecedented enforcement plan constructed with the intent of circumventing well-settled law,” Jamille Fields Allsbrook, director of women’s health and rights at the Center for American Progress, said. “This turns private citizens into bounty hunters and empowers anti-abortion vigilantes to sue anyone who provides assistance to a person accessing abortion care after six weeks.”

The mechanism has some legal experts worried that other states could try to ban abortions — or other activities — by replicating the Texas legislation.

For instance, might California conceivably outlaw firearms by crafting a law that says anyone who “aids and abets” gun sales may be sued for up to $10,000? Could other states do the same for people not wearing masks during the coronavirus pandemic?

The answer is yes, according to David Coale, an appellate lawyer in Texas.

“The structure of this statute could easily be adapted to other situations,” he said. “Imagine a ‘blue’ state doing something similar for gun ownership or church attendance.”

Elizabeth Sepper, a professor of law at the University of Texas at Austin, echoed that concern, calling the new mechanism of the Texas law a “procedural maze.”

“Because the Supreme Court at least temporarily endorsed Texas’s gambit to avoid federal constitutional review, we can expect to see other states follow suit,” Sepper told Zenger. “Allowing a bounty system where private citizens, not the state, enforce unconstitutional laws is a dangerous precedent and can’t be confined to abortion.

“Next, we might see the Texas legislature ban any criticism of the Texas government, deny any state role in enforcement and allow private enforcers to go after anyone who has anything bad to say about state government.”

Yet other legal experts say things might never get that far.

As other states look to copy the Texas blueprint, lawyers are likely to adapt their approach to litigation and, over time, may succeed in getting the laws struck down, they say.

“It’s a clever mechanism, but I don’t think it’s a way — certainly not in the long term — of stopping abortion or gun ownership or wherever it could be used,” said Ilya Shapiro, vice president of the Cato Institute and director of the libertarian think tank’s Center for Constitutional Studies. “If any other state tries this with something else, I think the litigation strategy would move along much quicker.”

“This is a clever way to prevent stopping the law through the normal course, through suing public officials, but the end result is going to be the same,” he said. “Those who are opposed to any given law, they will adapt their strategy to this kind of mechanism.”

The Supreme Court’s refusal to block enforcement of the Texas law was met with strong reactions from both abortion opponents and reproductive rights advocates.

Pro-life groups applauded the move as a win for the unborn.

The Texas law targets most abortions after six weeks of pregnancy — 18 weeks earlier than the standard set by the 1973 decision — leaving women with little time to confirm their pregnancy, choose to terminate it and have the procedure completed. Abortion providers in Texas estimate that 85 percent of patients seeking abortions are at least six weeks pregnant and will now be denied care even if their pregnancy occurred as the result of rape or incest.

The law could lead to the closure of all abortion clinics in Texas, leaving women seeking an abortion to travel across state lines for an average of more than 200 miles each way, making the average traveling distance for an abortion about 20 times the current one, according to research from the Guttmacher Institute.

“The vast majority of abortions in Texas — a state with almost 7 million women of reproductive age — are currently banned,” Palacio said. “Denying people access to abortion worsens inequities in public health and personal autonomy. The facts are clear that abortion restrictions like the Texas six-week ban disproportionately impact people with low incomes — in particular, black, indigenous and other people of color.”

So far, no court has heard or issued a decision on the constitutionality of the Texas abortion law, with the Supreme Court noting that question remained to be adjudicated.

An appeal to the initial challenge filed in July by abortion providers and pro-choice advocates — including Whole Women’s Health, the  ACLU of Texas, the Center for Reproductive Rights, Planned Parenthood Federation of America and the Lawyering Project, among others — is pending in the Fifth Circuit Court of Appeals.

That means the Texas abortion law could be in effect for months before any court decision is made.

It is now more likely that abortion providers will seek temporary restraining orders against those eager to file civil lawsuits — such as an order that was granted against Texas Right to Life on Friday blocking the group from suing abortion providers employed by Planned Parenthood.

Eventually, too, civil lawsuits filed by private citizens will begin.

“When a civil suit is filed, I’d also expect that the U.S. and Texas constitutions will be raised as defenses against what Justice [Sonia] Sotomayor called a ‘flagrantly unconstitutional law,’” Sepper said.

An earlier version of this article misspelt David Coale’s name.